Here are the SEC rankings as our computer spits 'em out.  We have a few overrides to do before submitting the actual ballot; discussion of that and the numbers follow after the jump. 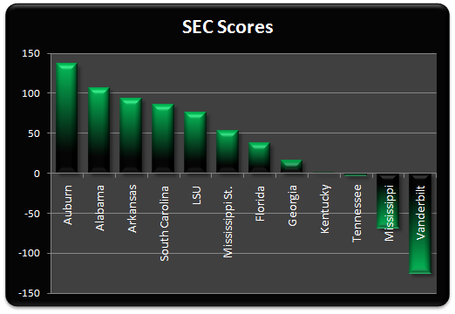 We need to sort out Alabama, Arkansas, and LSU.  I think the order ought to go Arky, LSU, then Alabama, but I'm open to suggestion on that.  Also, we'll need to figure out where South Carolina fits in all of that.

Outside of that, I like Mississippi State above Florida and Georgia.  I suppose Florida could stay above Georgia on record and head-to-head, but I think that Georgia is the better team right now.  Still, on-field results, right?

Why didn't Tennessee overtake Kentucky?  First, the computer doesn't place head-to-head value in the equation the way we do; it just knows that Kentucky lost and Tennessee won, and the metrics break down as mirrors (though there's not real significance to that).  Second and more importantly, Tennessee's defensive metrics were hurt worse than Kentucky's.  How is that possible when Tennessee outgained Kentucky, gained more turnovers, and outscored them?  Well, Tennessee's PED and RD were both higher than Kentucky's by enough that the amount that Kentucky gained dropped Tennessee's average values more than vice versa.  Since those are the two most important performance metrics in the equation, Tennessee lost just enough value to keep them below Kentucky.

Oh, and Kentucky's SOS went up while Tennessee's went down.  At any rate, I'll obviously bump Tennessee above Kentucky.  (No homer!)