At  first blush, I don't think our computers will require too much in the way of overrides, but there are a few out there.  The Excel '07 sheet is here, and the list follows. 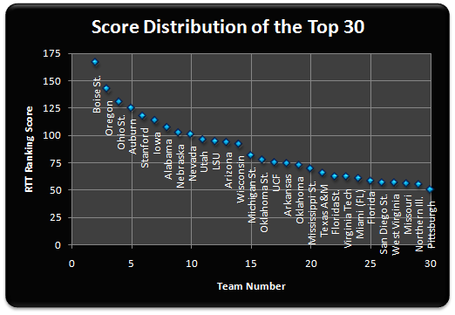 At this point, I feel there are three teams with legit claim to the top two slots: TCU, Boise, and Oregon.  I don't mind much of any order of the three, so let me know if you'd prefer them to be switched a bit.  I do think Auburn is the #4 in line because their defensive metrics don't hold up (this is why Ohio State actually jumps them in our computer).  I'll manually bump Auburn over Ohio St. in deference to the unbeaten record, but I'd need a good argument to move them up further.  (And no, 'SEC Pride' is not a good argument.)

After the first four, you can get really creative in the order.  There are a few obvious moves, like putting LSU ahead of Alabama (looking at you, Will).  Some are more difficult, like what to do with Nevada and Utah.  I'm inclined to leave Nevada ahead; their SoS is slightly worse than Utah's, but they also didn't get absolutely embarrassed on their own field and their one loss was @ Hawaii, with the '@' being a rather important qualifier in this case.  Outside of that, talk to me.

Good record, weak SoS, good defense.  Probably should be ranked, but where?

Miami and Florida?  What about San Diego St., Missouri, and might Northern Illinois?