One Yard = One Punt

Share All sharing options for: One Yard = One Punt

Chalk this up to offseason ramblings...

Last week, the news of Darr becoming a Volunteer got me wondering about how much a punter might actually affect a team's success.  So, thanks to the ever-helpful stat tables that the NCAA keeps online, I started playing around with the punting and kicking numbers.  (If you change the year in the URL of that link, you can get stats all the way back to 2000.)  As often happens in these kinds of treks, my initial questions (does a strong punter influence winning percentage, etc.) turned out to be less interesting than things I hadn't really put much thought into.

First, the answer to my questions:  no, having a longer-kicking punter doesn't help win games; no, the distance of a punt doesn't affect the distance of the return.  It's not too surprising, really; a punter is on the field for perhaps 5 of the 70-ish plays that a team runs.  Getting an extra five to ten yards per punt isn't really much of a big deal in the big picture.  The second one surprised me a little bit, but that's the way the data trends.  Here are the plots for both. 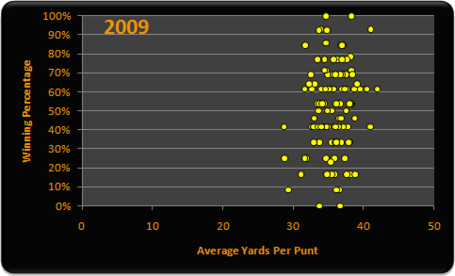 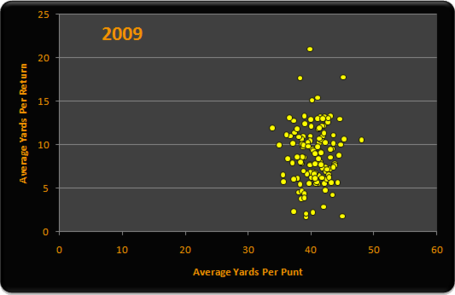 Basically, teams with strong punters and teams with weak punters have equal opportunity to give up big returns (or to shut down the return).  Distance doesn't fix everything; the return defense has to be sharp and/or the kicks have to be high.  (The obvious upside is that kicking farther means the returns have farther to go.  So I'm not saying that deep kicks don't help; I'm saying they don't affect the return distance from the point that the returner catches the ball.)

What I found of most interest was the relationship between the offense and the punting game.

It shouldn't surprise anybody that better offenses give the punter fewer opportunities.  Better offense = more offensive success, and punting = consequence of offensive failure.  If you look at the number of punts per game as a function of the offense's number of yards per play, there is a definite and expected trend.  Here is the result for all teams from 2006 through 2009. 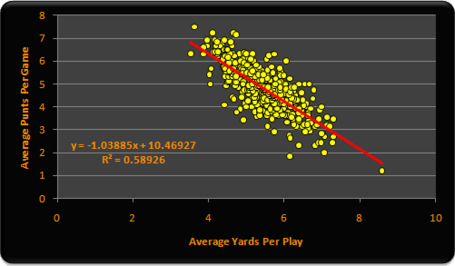 The trend is exactly what you'd expect: better offense = fewer punts.  What's nice about the data, though, is how easy it is to guess how often a team should be punting.  Basically, for every extra yard per play that the offense manages, the punter punts one fewer time per game.  If the offense gets 5 yards per play, the punter will see the field about 5.5 times per game on average.  The variance is such that a very simple rule is available:

If you really want to make it simple, just keep the lower punts per game number.  Then you get a very clean equation:

Simple, huh? Just hold up all your fingers, subtract away the yards per play, and the remaining fingers tell you how often your punter should see the field.  (Alabamans should subtract one.)

It's not the trend that's of real interest because it's so obvious, but having a handy rule of thumb is nice.  I don't know how useful it'll be to have, but there it is.  Now, for a bit of oddity:  the outliers. 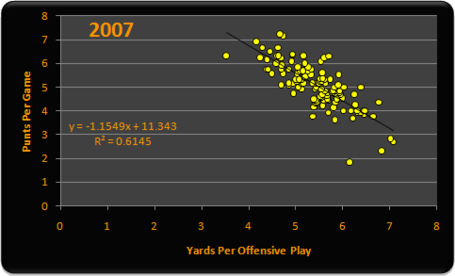 2007 is a fun year.  The biggest outlier of 2006 through 2009 is that low point - just above 6 yards per play and just below 2 punts per game.  (6 + 2 = 8 = very low indeed.)  I give you Paul Johnson in his final year as Navy's coach.  That next lowest PPG value (2.3 punts/game) is Mike Leach.  In fact, the service academies and the Pirate come up quite frequently as being the most punter-unfriendly.  (Florida with Tebow also scored very low on punt frequency.)  Also in 2007: the lowest yards per play (3.52) turned out to be below the expectation on punts per game (6.3).  Say hello to Notre Dame.  Also, the most punt-crazy team of these four years was 2006 Utah State, for what it's worth.

Anyhow, there you go.  One yard = one punt, and yards plus punts equals 10.  Simple enough that even a punter can remember it.