Share All sharing options for: Game Theory Is for Wimps: Florida's Offensive Stagnation

Urban Meyer's been hailed as an offensive genius since before his Utah days.  That's justified; after all, Utah was the first BCS buster, and Meyer's quick resurrection of Florida after the (excellent) Ron Zook era speaks to the wisdom of Meyer.  Taking a look at the offense reveals a simple truth: it's actually a simple offense.  Heck, on a not-too-deep level it's even predictable.

That doesn't necessarily equate to unproductive, and it's important to recognize that distinction.  Georgia Tech's offense is the walking definition of predictable; they're going to get the ball, run on about 85-90% of their plays (of which about 70% will be some option variant), go for it on fourth down unless it's completely out of reach, and rack up points much faster than you'd expect.  If you'd prefer another example: Tebow Smash.  Predictable and effective.

And yet, Florida's offense hasn't been nearly as effective since Dan Mullen's departure to Mississippi State.  There are reasons for that, and knowing those reasons make dealing with it much easier than it would appear..

Basics: Hit 'em Where They Ain't

Meyer's offense is designed around ...well, nothing in a sense.  Sure, it's a spread, but it's not a spread like you think of a spread.  It's not designed around a certain set (i.e, flexbone, which isn't a spread but serves my purposes well enough here) or a certain approach (Air Raid, come on down!); instead, it's designed to use flexible personnel and flexible formations to attack run and pass equally, dependent on what the defense has given them.  As always, it's best to visualize this. 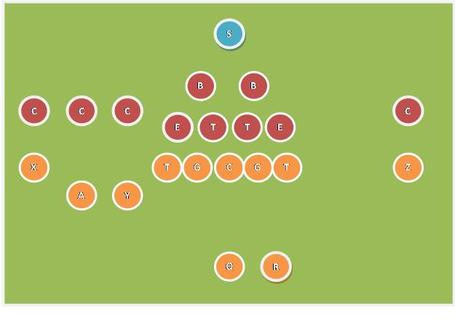 Note the presence of only one safety up top.  (Yes, one of the DBs over a WR is probably a safety, but were calling him a CB for now.)  This means that there isn't a numbers advantage in the box - it would be 6-on-6 during a typical run.  However, there are plenty of ways to attack this defense through the pass game.  Again, how Florida attacks that defense is going to be a function of how the defense is playing.  Are they in zone?  Are they in man?  Is it tight man coverage?  Loose man coverage?  Answering those questions - which in college, is a lot easier to answer than in the pros - let Florida develop their gameplan.

So what about two safeties? 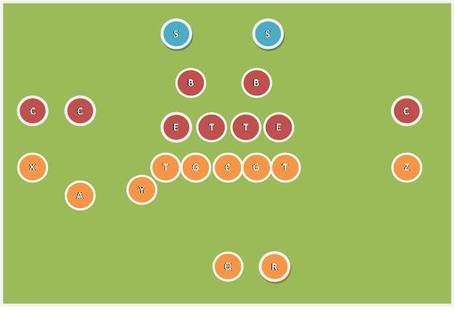 Let's look at the box again.  That looks like 6 blockers on 6 defenders, which makes this super-useful to run against.  The same basic principles apply, although in this case it's easy for CBs to sneak in to become a 7th man in the box or safeties to sneak up a bit, which is why screens and other constraint plays are effective here.

Against no high safeties, it's a blitz.  That's pretty simple.

Formation-wise, to some extent it doesn't matter.  On some level, I've described the whole idea behind pro-style offenses - take advantage of what the defense gives you.  However, Meyer opts to use spread-type sets, so even though the concepts are simple, formations can be vastly different.  In the two-high illustration above, it's just as easy for the Gators to have 2 WRs on either side, or 3 WRs on one side and one on the other.  (In that case, it'd be 5v5 in the box and runs still make sense.)  In the one-high illustration, the same thing applies.

As far as what Florida will run, it's not anything we haven't seen before.  Short route combinations, inside/outside zone, and this little beauty we thankfully won't have to deal with this season but I'm sure everyone recognizes: 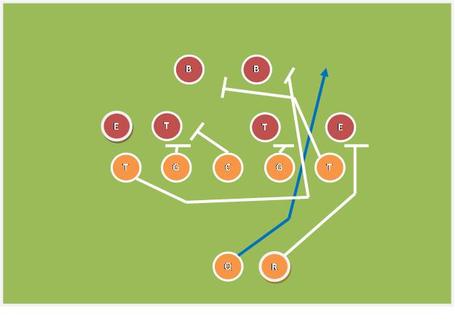 They do run option, but they've generally shied away from it this season due to Brantley's complete lack of run threat.  (If the Gators run option this weekend, sell out to stop Demps.)

This sounds like it makes sense, right?  Respond to what the defense gives you, play effective, and make the defense be predictable.  In terms of actual plays, it's stuff we've seen before - base runs we see all the time out of power sets, some option, strong short passing game.  Mixed properly, it's devastatingly effective - heck, Mississippi State has had a better offense than UF this year and it's not like they have stellar personnel.  So what's happened?

What does that have to do with Florida, you ask?  Well, it's very tempting to get used to a QB battering ram who can run inside to the tune of 4 yards a pop.  It makes things easy, and it's taken Steve Adazzio time to get used to not having that ability.  As such, he's massively favored inside runs over outside runs - when an outside run is sufficiently set up, this happens.  (Check the 1:45 mark.)  And this happens.  Granted, a lack of a consistent deep threat has hampered Florida as much as anything lately,

Now, if I know you can't have sustained success passing deep, then I can put my deep cover guys - in most defenses, this'll be my safeties, but in some instances (roll cover 2, for example) that may be a safety and corner - in situations to stop the run.  As a result, I can better stop the things you can do like the short passing game and the power run game.  You should be able to beat me deep, but if you can't, how do you respond?  The answer to that question led to the what we saw in last year's game, which deserves its own section.

Papa Kiffin and the Holy Grail

Monte Kiffin and Eric Berry managed to nearly shut down the Florida offense last year (and likely caused half the problems the Gators ran into the rest of the season).  Again, Smart Football provides the basics here.  Pay particular note to the coverage response (also in his post), which isn't the only way to deal with this but it is a way to deal with it:

The idea here is that there are coverage schemes out there that can deal with both a run and a pass threat, provided your corners are good enough to handle one-on-one situations (especially in this case, the backside corner).  The safeties can provide pass support on the outside receivers but are actually run-stoppers.  This seems weird, but Tennessee's secondary last year was good enough to function in this dual role.

Better yet, it's a good blueprint.  There's nothing particularly tricky in the above diagram - it's a two-high coverage (which, again, means Florida would look to run) with what looks like man coverage on the receivers.  If it's a run play, the safeties start flying down to the point of attack, but if it's a pass play, it's easy enough to play a bunch of different coverages - cover 2 with man, cover 4, cover 3 with man on the far side (which isn't a good idea, but you can do it, I suppose), and so on.  Just because it looks like man doesn't mean it is man.

To answer this, Florida relied extensively on their defense and their run game.  That doesn't seem like the optimal response, does it?  And yet, we're seeing that again this season.

I can't imagine I'm the first person to dare Florida to beat them deep since the offense went into a relative shell.  And yet, it hasn't happened for the most part.  If the Gator offense couldn't find a way to challenge DJ Brown and Dayonne Nunley, do you think they'll be able to deal with Janzen Jackson and Prentiss Wagner?  If they're not good enough to take advantage of the deep pass, let Florida try to execute them.  (And yes, that's a potentially dangerous recipe, but we're underdogs.  May as well embrace the high-variance strategies.)

That sounds nuts, doesn't it?  Yet John Brantley only had two completion over 20 yards against Miami (OH) and three over 20 yards against South Florida - and none over 25 yards all season.  This offense isn't challenging teams deep, and I don't know if it's because they don't want to or they aren't able to, but ...well, if they were able to, it probably would've happened once this season if only by accident.  Oh, and Chris Rainey is gone.  Good luck with that.

As for the run game, that's why you have safety support.  Wilcox will base out of four down linemen (and I expect most of the game to be in 4-2-5 unless we see a lot of TE action from the Gators).  With the safeties having the ability to be in run support, that'll affect the run game.  The key here is for the safeties to not take themselves out of the play.  This happened from time to time last week, but Florida doesn't use as much of the 1v0-type options (where you're always wrong) as compared to Oregon, so I'm less concerned about that.

Heck, I'm not concerned about option at all.  Positional discipline is still a big deal, but for different reasons than it was against Oregon.  Against Oregon, you had to deal with reading the defense and outright speed.  Florida has the latter in spades, but much less of the former.  Do you think Wilcox respects John Brantley (4 carries for -20 yards on the season) as a runner?  They have to use backup QB Trey Burton as the running QB, and that's a wee bit predictable (total passes for Burton on the season: zero).  Better yet, it's predictable in a way we know is predictable.  We were able to blow up Oregon's zone read in more than a few occasions last week, so there's no reason to be scared of this.  It's game theory, yet again; we have no reason to respect Brantley as a runner or Burton as a passer.  Therefore, we have to pay minimal attention to either of those until proven otherwise.  Wilcox should have responses if this happens, but not gameplan around these possibilities.

This is the most talented defense Florida's faced all season, and save a couple of Jeff Demps runs, they haven't really been explosive.  There's no reason we can't stymie UF.

As always, Smart Football has a great basic summary of the Florida offense, including much more on philosophy and sourcing than I covered.  Also - Meyer learned in part from Jim Chaney.

We haven't seen much of this in 2010, but it's still there, buried in the playbook somewhere.

If anyone can find a video of the 2009 SEC Championship game that isn't all tight shots of Alabama players, let me know.

Note a couple of things from this: we're not going to see nearly as much legitimate option (and if we do, sell out to stop Demps pronto), and notice how many of the UF highlights are a function of missed tackles.