Here is my week 3 ballot for the power poll, along with computer data after the jump.  I use the same computer ranking metric for the SEC Power Poll as I do for the BlogPoll; usually, the power poll does not require much intervention as 12 teams in the same conference end up spreading out, but this early on we haven't had enough conference games to really sort things out.  That will result in a couple tweaks, as you'll see.

Here are the raw numbers from the computer, along with a chart to help show how close some teams are grouped together.  Note that this is in computer order, not in ballot order.

Woo Strength of Schedule!  Tennessee may be 1-2, but it's the hardest schedule in the SEC to date, and the computers agree.  (The computers think it's the 9th hardest in all Div. 1-A, but I digress.)  Oddly enough, Tennessee is slightly above league average in terms of 3rd down defense (3DD), indicating that 3rd downs may be a bit of an issue league-wide.  The 3rd down offense (3DO) is a huge issue for the team and is likely a function of defenses reading the quarterback on must-pass downs.

It's also very interesting that all SEC teams are either 3-0 or 1-2.  It makes for a very easy division of teams in the polls, but also reveals that the SEC is perhaps weaker this year than in years past, as 5 of the 12 schools have losing records already. 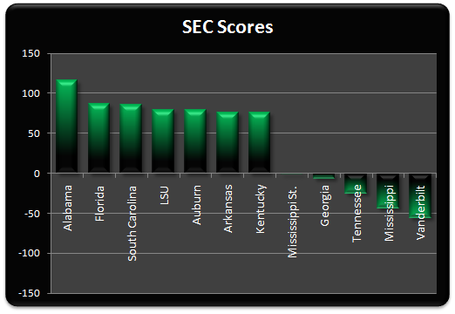 As you can see, the Florida through Kentucky grouping is numerically very close.  Kentucky and Arkansas have the weakest schedules of the bunch, and are docked accordingly for that.

I moved South Carolina to #2 because their performance has been more solid than Florida's, and against better competition.  Georgia went ahead of MSU for similar reasons.  I left Auburn ahead of Arkansas simply because they played better teams (and both had very reasonable opportunities to lose).

Lastly, I switched Ole Miss and Vanderbilt for obvious reasons.

Just for fun, here's a look at how the conferences are stacking up.  It's really early, but a few rough details are beginning to emerge. 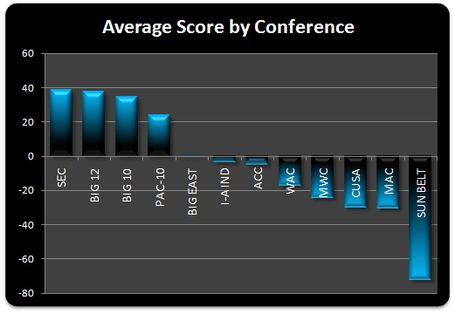 The top three are interchangeable at this point.  The odd one is the PAC-10 who, despite Oregon, Arizona, and Stanford, are below the other big conferences.  This is because teams like UCLA and Wazzou still score below teams like Vanderbilt and Ole Miss.  But getting back to the top: if you move Nebraska to the Big 10ish, that conference actually slightly outscores the SEC at the moment.

The MWC is scoring its worst since I've started tracking this a couple years ago, and by a considerable margin.  If you make all the conference changes (Boise, BYU, Nevada, and Fresno), the MWC vaults up in-between the Big East and ACC, and the WAC moves down to near-Sun Belt levels.  The PAC-10 must cheer for the WAC to survive.  Why?  A simply analogy -->  WAC : PAC-10 :: Sun Belt : SEC.  Having so many convenient tune-up games in your own backyard is always a nice thing to have.