The one fun thing about resume ranking systems is that, if they're reasonable systems, they show convergence toward an intuitively acceptable order of teams after a few weeks.  The early goings can be wild, but seeing the order emerge from chaos is really what we're all trying to do at this time of year.  I like to think that our computer method is at least reasonable, though we've already admitted it's far from ideal (hence why we allow overrides).

This week sees some sense creeping into the numbers and some more applied sensibility to come when the RTT ballot hive-mind settles on overrides.  Thanks to teams finally playing worthy competition, we also see a lot of shifting around, which gives reason to look closely at the numbers and evaluate.  Here is our rough draft, along with observations and comments afterward.  (For those so inclined, here is an Excel spreadsheet that allows you to play around with the weights and see how the rankings change.)

First, here is a graphical look at the top 25 teams.  For more information, reference the Excel chart linked above. 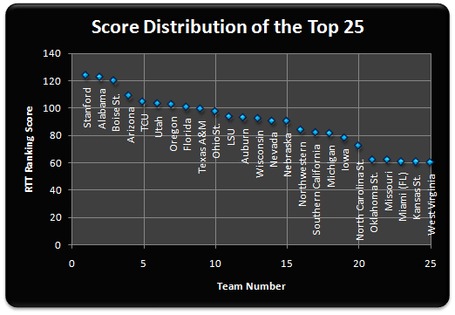 Stanford is good, but really?

I was a little surprised at Stanford, even though I already knew that the computer was high on them, so a comparative look between them and Alabama was in order.  First, we can see that the scores are very close.  (In fact, at this stage of the season, Stanford, Alabama, and Boise are statistically indistinguishable with scores of 123.6, 122.3, and 119.5 respectively.)  But the real difference is in Third Down Offense (3DO) where Stanford is more than a full standard deviation better than Alabama.  Stanford has successfully converted 29/49 3rd downs for a 59% success rate, while Alabama has completed 20/40 for 50%.  I haven't peeked to see things like average distance, but it's enough to state that Stanford at least has a reasonable argument for being #1 at this point in the season.  But again, margins what they are, we can tweak the top of the order as you like.

This is why computer rankings can be so screwball in the early goings.  A&M has played three teams: Stephen F. Austin, Louisiana Tech, and Florida International - not exactly a murderer's row.  This has allowed A&M  to put up gaudy stats against two teams (the first two) and barely squeak by a FIU squad that the computer ranks 99th.  Simply put, they're removed from the top 25 until they play somebody of quality, which would be Oklahoma State next week.

OSU suffers a similar problem as A&M where the Marshall (#102), Ohio (#101), and EMU (#120 - dead last in FBS) games tank their SOS, and the quality win against Miami pulls down their otherwise gaudy offense and defense metrics.  Since the computer lumps all that together, we're stuck with the impression of a top-10-but-not-top-5 team.  I have no problem moving OSU up on the basis of the Miami win.

I watched Nevada for two weeks now (California and BYU), and I'm very impressed with them.  They're clearly not as supremely talented as some of the big names, but their team chemistry is excellent and Kaepernick is the ideal quarterback for the system.  This is a 'their year' type of season for them where experience in key positions is peaking all at once.  I have no problem with them being in the 10-15 range, though I expect some recommendations for teams to be moved around in this range.

The one thing to note about Nevada is their Third Down Offense (3DO), where they are best in the nation, converting at a 63% clip (34/54).  This is all Kaepernick, who has greatly improved his accuracy this year and is still a threat to run.

Thank goodness for Joel's Animated Drive Charts.  I was completely baffled as to why Oklahoma was ranked so low when they were undefeated with some respectable teams on their schedule (FSU, USAFA, and Cincinnati).  As it turns out, Oklahoma has been the beneficiary of a very favorable turnover margin, averaging a +2 margin through the first four games, which is tied for fourth-best in Division 1-A play.  When you look through their drive charts, you see that those turnovers had a tendency to either give them a very short field or to save them from a long drive where the opposing team was almost certain to score.  There's an entire conversation to be had regarding random vs. skill-induced turnovers, but I'll shelve that for now.

Oklahoma is inconsistent to a large degree.  It hasn't mattered who they played so far; they are very boom-and-bust when it comes to success on both sides of the ball.  They could very easily be 1-3 if their opponents would just hold onto the ball, and even the FSU game was much closer than the score, save for the turnovers.

I'm convinced that Oklahoma is going to get drilled one day when the turnover margin is equal or against them.  That hasn't happened yet, and we can't penalize them for projections into the future.  Looking ahead, however, I'd normally say that Texas would be primed to beat them at the Fair, but Texas is suffering through problems that are at least as bad as Oklahoma, so I really don't know what to think of that game.  (I just know that I'm going to minimize the number of confidence points I place on it in our pick 'em pool.)

So what do I do with Oklahoma?  Bump up?  How far?

There is some work to do.  We have the Florida/LSU/Auburn grouping to sort out.  Teams like Oklahoma, FSU, Texas, USAFA, South Carolina, and Arkansas at least need to be looked at.  Other teams like West Virginia, KSU, Northwestern, and Iowa may be candidates for dropping.  USC will be dropped in the final version, as always.  But all in all, the numbers are looking a little bit better than last week.