Our draft ballot uses the same computer ranking system that our BlogPoll ballot uses.  Here is the list, and my thoughts follow after the jump: 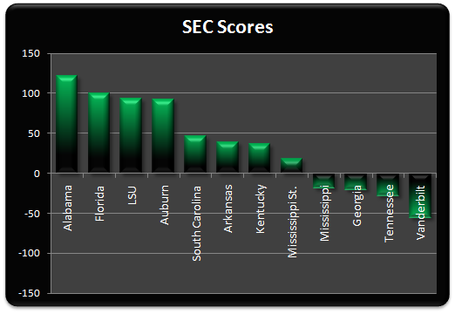 Florida/LSU/Auburn:  all close enough to be effectively tied.  They've all had rough spots this year, but I think I'll leave Florida up front for sheer talent.  Auburn and LSU are wholly interchangeable.  Got any logic for them?

South Carolina/Arkansas/Kentucky:  I like this order because South Carolina is the best balanced of the three and Arkansas has more talent than Kentucky.

Mississippi St. is probably right where they should be.

Mississippi/Georgia/Tennessee:  Oy.  Mississippi's convincing win over Fresno made the difference here, as they're the only ones with a reasonable pelt.  But ... Jacksonville St.  Normally I'd move Tennessee above both of them, but last weekend should give us pause and realize that we're just as vulnerable as the other two.  The difference is that it feels like Tennessee is moving in the right direction while Georgia and Mississippi are moving backwards.  *sigh*

All in all, I am comfortable with the existing order.  I can see making a couple adjustments, but only where the scores are already close.  Unlike the BlogPoll, the teams in the Power Poll tend to have good separation and make sense early on.  As for the numbers...

Cam Newton has the best efficiency numbers in the conference right now, particularly since Mallet has just run the Alabama gauntlet.  If Auburn ever figures out this 'defense' thing, the Iron Bowl just might be huge again this year.

Yes, Tennessee's Third Down Offense is that bad.  But they're NOT the worst in the nation.  San Jose St. scores a -2.852 to our -2.544, which is significant and, to be crude about it, is like prostitutes debating who has more purity.

BUT, look who's on the schedule.  Both of the worst Third Down Defenses are SEC East teams (South Carolina and Georgia).  They're still better at 3DD than Tennessee is at 3DO, but I'll take anything I can get.

All in all, having Georgia and Tennessee in the tank this early is hurting the SEC as a whole.  This may very well be a year where a different conference is stronger overall, and will be worth keeping an eye on.