Tennessee Offensive Strategy: System of a (Third) Down

Share All sharing options for: Tennessee Offensive Strategy: System of a (Third) Down

I am probably the biggest Jim Chaney apologist in Tennessee.  I was there in Laramie when he was the offensive and recruiting coordinator under Joe Tiller and took the Wyoming Cowboys to amazing offensive heights.  Despite fielding teams where virtually nobody would ever get a sniff of the NFL, Wyoming was a terror on defenses, and 50-point outings were not uncommon.  It was an implementation of the passing spread before the spread was even a term, and nobody knew what to do about it.

So when I see the following stats from the Tennessee offense, I become very curious as to what he's doing.  I know for certain that Chaney is aware of everything I'm about to talk about, and that it goes against everything he did at both Wyoming and Purdue.  But as we discussed at great length during the UAB game, the offense is extraordinarily predictable on third down.  And I can't figure out why.

First, let's take a look at the types of third downs we've faced.  Normally I like to break up the yardage in three-yard increments, but since the announcers made a great deal about third-and-six or greater, let's use that.  So here are the third downs, in terms of percentage of occurrence, for the following distances to a first or the goal line:  1-2 yards, 3-5 yards, 6-10 yards, 11-15 yards, 16-20 yards, 21-25 yards, and >25 yards. 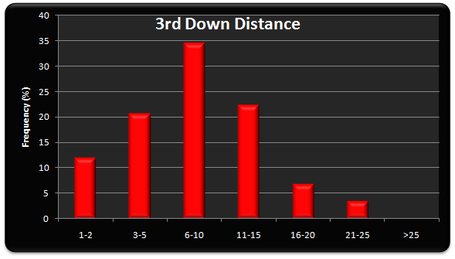 About 2/3 of our third down tries came from 6 yards or further so it should be to no surprise that most of our attempts were passing attempts.  What might be a surprise, however, is exactly how the run/pass splits look for the difference distances. 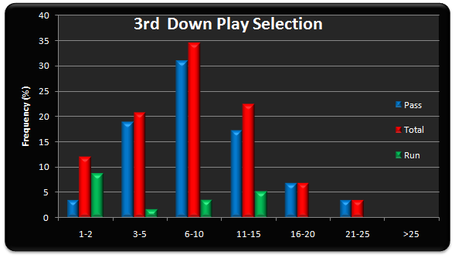 If the ball was only one or two yards from the first/goal line, Tennessee ran more often than passed (which makes total sense).  But anything after that, and the play calling was pass-happy.  In fact, Tennessee was most likely to pass on 3rd and 3-5 yards to go.  Tennessee passed 92% of the time from on 3rd and 3-5, 90% from 3rd and 6-10, and 77% from 3rd and 11-15.  If you consider that a couple of those 3rd and 11-15 calls were to set up field goals or to run clock, then Tennessee is basically a 90% bet to pass the ball on any third down that is more than two yards from the first down or the goal line.

How successful was this strategy?  We know the 3rd and 6+ stats by heart now, but here is the success rate for the various distances: 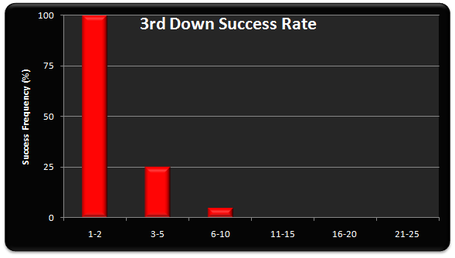 You'd expect reasonable success within 1-2 yards, and indeed Tennessee been perfect when that close.  But UT is at 25% from 3-5 yards out and effectively zero from anything further.  Here are some more facts to chew on:

There are two issues to be addressed in this data. First is to figure out why Tennessee ends up in so many third and long situations.  A part of the answer is due to the false start penalties that changed 3rd and 1 to 3rd and 6, but Tennessee ended up in a lot of long situations even when excluding those penalties.  This goes back to the reality we face:  the team is young and is still growing.  They'll undoubtedly get better, but right now the inconsistency is putting the offense in tough positions.

The second issue is to wonder why Chaney is so quick to turn to passing plays, even when the distance is less than 6 yards to go.  The man may have come from spread systems in the past, but he's become more and more of a pro-style coordinator over the years and is very fond of a strong running game.  I think there are specific reasons that he's avoiding the run in those intermediate distances, but I haven't had a chance to go back through the tape and look for any answers.

And that's where we are, really.  The stats tell us that we're a pass-only team on third down.  But stats tell you where to look; they don't tell you why things happened.  The next step is to ask why, and to wonder if our passing game really is more dependable on third down than our running game, or if Chaney just happens to be locked in a rut.