How LSU Went in the Offensive Tank: Death, Taxes, and Crowton

Share All sharing options for: How LSU Went in the Offensive Tank: Death, Taxes, and Crowton

I feel like I need to start with some disclaimers. (No, this isn't an early-season BlogPoll back from the dead.) I had this plan back when the season started to identify weaknesses in opposing teams and figure out ways to exploit those weaknesses, save for a couple of weeks to basically illustrate how certain teams just went about their business. Oregon was one of those weeks. However, fat lot of good that's done so far, as pretty much any team I've done a breakdown of has been a team we've lost to. That hasn't worked.

On the other hand, it's fun to poke holes in teams. It just doesn't feel right to let a team with as much, well, comedic potential as LSU just up and fall by the wayside while I drop 3,500 words talking about how game theory relates to 3rd-and-3. There will be plenty of time for that as the season goes on. (Heck, at the rate this season's going y'all are going to beat me to it.)

The other disclaimer: as tempting as it is to talk about how John Chavis' schemes work, isn't that kind of cheating for a Tennessee blog? It's not like everyone who's followed Tennessee for any length of time doesn't remember the things Chavis does well (and what he doesn't do well, at least in seasons past). It's the easy way out. Instead, let's revel in an offense that's even worse than ours*. Let's have some fun.

By the Numbers, Boys

So I could sit here and draw a bunch of pictures and diagrams and show you in excruciating detail how LSU and Gary Crowton have managed to completely neuter their offense. Or, I could skip ahead and just show you the following pieces of information (like Doc Saturday before me) - see if you can identify the trend:

Well. That looks promising. There could be a myriad of potential culprits when you're talking about a single-year decline, but if it's happened over four straight seasons, that extends past recruiting classes and onto the coaching staff. Degradation of talent may have something to do with it, but talent along isn't responsible for that decline - besides, LSU has consistently brought in top classes (not to mention the #1 overall QB and WR from the '09 class, and that's what I can recall off the top of my head). So if it's not talent, and it can't be all defense (which may vary on a game-to-game basis, but I find it hard to believe that it extends all the way across every game LSU has played since 2007), then it's formations and playcalling. Who does all that? Oh, right.

Quite frankly, this thing looks like it was cribbed from highlight reels of various offenses across the NCAA (I even saw some pistol last week, which is more a sign that Crowton was watching Cal-Nevada the previous Friday than he was looking to install a package based on the pistol). I've thrown enough formations at y'all over the last few weeks that I'd like to offer the following up as a homework assignment: 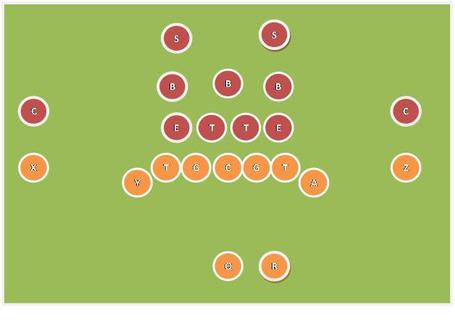 If you're LSU, what on earth do you do with this?  I spent about 5 minutes staring at it trying to figure out how it would be used with their personnel.  Here's what I came up with: technically we have 4 potential receivers since the TEs are eligible, but LSU's TEs have 6 total catches on the season.  (Not 16.  Six.)  It looks like it'd be useful if you're running a zone-read game, but ...well, if LSU was going to install that kind of package they probably wouldn't have put Russell Sheperd (the aforementioned 2009 #1 QB) at wide receiver. Jordan Jefferson hasn't been doing anything on the ground, so that can't be it.  What about isolating the WRs? Well, that makes sense, and would be a solid idea if Jefferson could pass. At all.

If you're, say, Oregon, I like this a lot - it brings in an extra blocker and brings a defender inside too, so I'd love running outside zone read with this kind of set. I like running fade routes near the end zone with this setup (especially given the height of Terrence Toliver and Reuben Randle), but then we get into the question of what else we can do with it. Having a formation you can only do one thing with is functionally useless.

On paper, they're as talented as anybody, but they've displayed a staggering lack of ability to exploit this level of talent. That in turn has resulted in a steady wearing-down of teams that are less talented than them and a dead-man-walking offense against anyone with the horses to match up with them. I can see an argument for LSU being a bad spread team, which isn't the worst potential reality out there. The better question at this point focuses around what LSU's offense is.  Quite frankly, I'm not sure I have an answer for that. The best description I can think of for it is "college"; it does some pro-style stuff, but it has little bits and sprinkles from things that are popular in college, and manages to do none of them well.

Putting a Guy in the Percy Position and Not Using Him Like Percy: The Russell Sheperd Story

On one hand, I understand the idea behind moving Russell Sheperd to a position where he can challenge defenses in multiple ways. As a QB, he can challenge defenses from under center with both his arm and his legs, and he has the ability to be split out to catch passes. That sounds pretty awesome, except Sheperd converted to a full-time WR. Oops. On some level, this isn't a bad idea; if Sheperd can't consistently read defenses as a quarterback, then putting him in a position where he only has to read a part of the defense makes sense. Then he becomes a valuable weapon to be deployed across the field, and LSU has made it clear that they will deploy Sheperd as both a runner and receiver (their only player to be offered this distinction).

The problem, of course, is one of frequency of use. Sheperd hasn't had more than 9 touches in a game, and only got 4 against West Virginia. He's been effective enough on the ground, but like the rest of the team is functionally useless in the passing game. It's less like there's a gameplan to use him and it's more of an idea. This may change as Sheperd gets more comfortable in his role, or he might've gotten stuck in a role that nobody on the LSU coaching staff knows how to exploit.

Let's go back to the basic tenets behind the spread: the spread offense is deigned to get one-on-one matchups and put your playmakers in position to make plays. It can work - when you have an offense that can effectively get them the ball.  In the running game, this is relatively straightforward - get blockers out and have your RB do his thing.  We've seen this before (there's a reason zone read is so popular). In the passing game, this not only means your WRs have to be able to get separation, but your QB has to be able to get them the ball once they get that separation. The route doesn't make a whole lot of difference - we like to think "separation" means "streak", but a WR who can consistently run, get open, and catch a 5-yard curl route is every bit as useful.

What's happened to LSU is they're, well, doing it wrong. It's formation, it's application of talent, it's ...well, it's design. And yet, it's effective against teams that they're more talented than; it's succeeding in spite of itself, and it's succeeding on the backs of everything around it.

How Do You Stop Something That Stops Itself?

I'd love to say "stay loose, stay in base packages, and wear the game down", but I don't think that works here. That strategy works when you have an equal level of talent (or a greater level of talent); that isn't the case this Saturday. Going with a Goliath strategy makes no sense. Quite simply, we need variance to win this game, and variance is a function of, well, schemes and playcalling. Aggressive play is necessary here. Given the offensive struggles we've had this season, there's no reason we shouldn't go all-out and batter an offense that will likely spend a good part of Saturday shooting itself in the foot. Why shouldn't we help them out a bit and aim that gun at their kneecap, too? A couple of turnovers, especially early, will do wonders. So will short field position for our offense. Ask Florida how that went for them against us. If we get blown out, well, that's the danger of this strategy. However, I doubt that'll happen, because that would require LSU to be competent.

Expanding that a bit further, it's a question of time and available plays. LSU isn't the kind of team that relies on 80 plays a game (they've only averaged 60.5, which sounds like a lot: Tennessee has averaged 63.25 plays per game); factoring in their time of possession, LSU averages about 30 seconds per play. (By comparison, Tennessee is at 26.5 seconds per play.) That's close enough that every play LSU doesn't run is a play Tennessee can run.

Put more simply, divide a 60-minute game into 30-second chunks. We end up with about 120 chunks, which will be close to the number of plays we'll see on Saturday.  (Yes, there are punts, FG attempts, and the kickoff to start each half; they do factor in here, but not a ton.)  The more of those chunks Tennessee has the ball, the more of an edge they'll have in total plays.  Pretty simple, no?

One last idea, but it's a little more complex - the idea of "useful" plays. Basically, each play has a use if it's part of a scoring drive - if it makes it more likely to score, then it's a useful play. Of course, we need some kind of threshold, which I'm not going to strictly define (I'll just use the "you know it when you see it" line). Roughly speaking, we're talking plays in your own half, second and long, third and long, those kind of things. Those plays aren't typically very useful. If we can have more useful plays than LSU, that's as good a chance as any. Since we have so much confidence in our offense right now, on defense that basically means not freaking out about LSU moving the ball up to, say, our 40. Then we start getting worried. Those plays matter. Let LSU waste away time running between their own 20 and 40, because - again - we're going for variance. Let them do that and capitalize when they have to punt. If they burn a lot of time doing that, so much the better.

No advanced reading this week - you don't really want to read any more about bad offense, do you?

Yeah, so I couldn't help myself - here's a quick primer on LSU's defense. 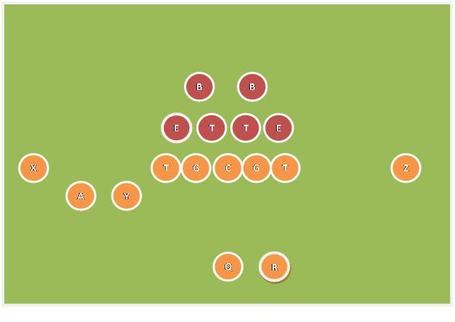 Fig. 1: the Mustang package. (Not pictured: any members of the secondary, who are currently sitting in the stands.) 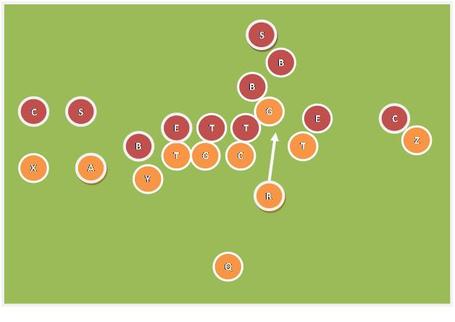 Fig. 2 - Chavis' defense in pursuit. Note the success of unblocked players flowing to stop the play and the LB effectively shutting down the hole. Also notice the lack of arms on any of the defenders, meaning this play will result in a TD since nobody can tackle. 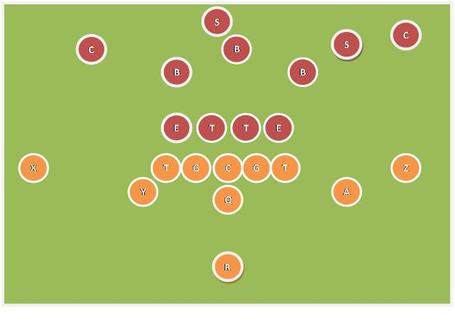 Fig. 3 - an example of Chavis' third-down alignment on 3rd and 8 pre-snap against a 3-WR set. The OLBs are at 9 yards depth.

*does not apply on third down (see?  I can't get away from it)