I feel like I need to start this with a confession: Oregon’s offense scares the tar out of me.  Sure, part of it is the scheme, but the thing that amazes me is how consistent it’s been with variant personnel and changes in coaching.  Chip Kelly’s been there for a while now (and is, for all intents and purposes, the architect behind what we think of when someone says Oregon – well, what we think of after Donald Duck), and it’s a testament to his performance that the same basics have governed his offense for years.

That’s it.  Well, okay, so that’s not really it, but that’s what pretty much everything is based off of, and that goes for both the run and pass game.  However: the devil is in the details, and …we’ve got some details. We’ve got a lot of details.

The Basics: Zone Read in Inside and Outside Zone

First off, what does a basic inside zone look like?  Generally, it looks something like this - note that for simplicity's sake, I've eliminated the deep safety; this is defending from a 4-2-5 look, but it's similar with a 4-3 and with the offense using a TE.  The guy in light blue is the guy getting "read"; he'll be unblocked, but that's intentional. 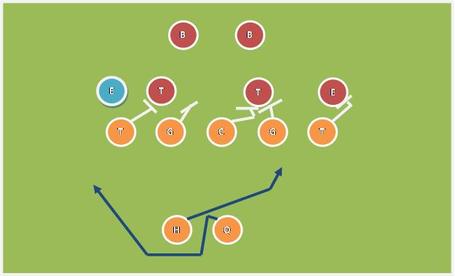 As these things go, this is pretty simple for the offense: the QB "reads" the action of the defensive end, and depending on where the defensive end goes, that dictates how the play unfolds.  Basically, the QB asks "where was the DE's first step?" - if it's out or straight down the field, then the QB opts for the handoff.  If the DE commits and starts charging diagonally across the formation in pursuit of the HB, then the QB will keep.  This will pull the DE out of position regardless of which way he goes, provided the QB makes the correct read.  At the double-teams (both DTs), one player will look to release to the second level and kick out the LBs as they flow to pursuit (in other words, finish their first block and move up to block the LBs)..

The defense has a pretty simple answer to this: 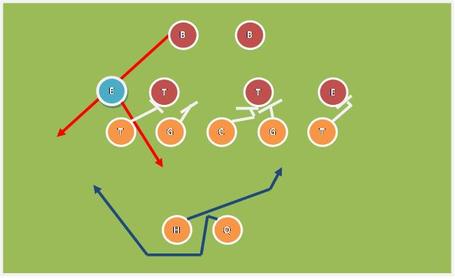 This is what's known as a "scrape exchange".   The defensive end always pursues the HB; since the QB is reading the DE, he should see him pursuing the HB and opt to keep.  While he makes that decision, the LB gets past the offensive line and gets a free shot in on the QB.  That's pretty cool, right?

Against most teams, that works - but in this case it's not so simple.   Oregon in particular has a nasty response to the scrape exchange: 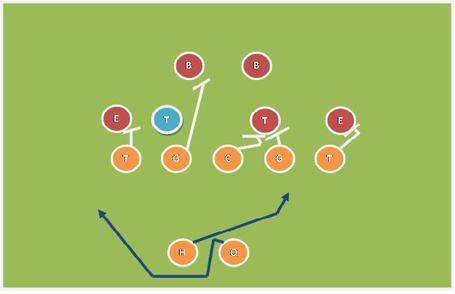 This is a bit different.  The DT (which for our purposes, we’re going to call 3-tech – he lines up on the OG’s left eye, putting him in that gap) is now getting read.  Functionally, it’s the exact same play for the QB, except he’s reading the DT.  Oregon knows how to use both of these reads, and will use both during the game.  This has the intended side effect of confusing the defensive line.  It also makes things like the scrape exchange difficult, since both players that were involved with the scrape before are initially blocked now.

Outside zone functionally looks similar; however, instead of looking to cut, the halfback will instead look to bounce to the outside - instead of going between the guard and tackle, he'll look to run outside the tackle and toward the sideline.  This will punish the LB sitting on the 1-tech DT, and if the cornerbacks / safeties on that side can't shed blocks, it spells trouble.

Inside / Outside zone aren’t the only rushing plays that Oregon run.  They will run fly sweeps and other plays based off this sweep (clearly identified by the WR running across the formation as the ball is snapped).  They do run counter, and they’ll run simpler stuff like power.  But that’s only half the story, because the other thing they’ll do is read.  Oh, will they read.  And just when you think they’re reading you, you get an offensive guard pulling and they roll a 15-yard power on you. 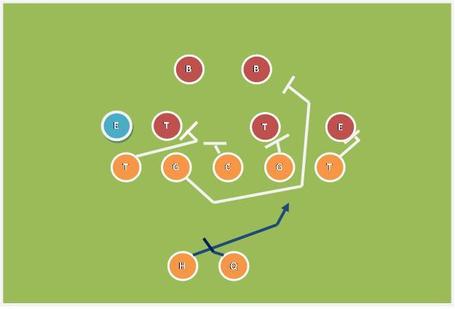 Doesn’t that just look like fun …or doesn’t it look remarkably similar to a typical power run?  (Note that the exact blocking scheme may change from play to play; this is a zone blocking scheme, so in this particular configuration the C would release to block the currently-unblocked LB.  Also, the routes the blockers take are, um, blockier than they are in reality.)  The poor DE we’ve been picking on all post gets unblocked again, but based on how the blocks flow, he’s going to have issues getting to the HB in time.  Oregon ran this play against USC a few times and actually had their entire OL flow away from the unblocked DE, effectively taking him out of the play, along with any LB poor enough to get stuck on that side of the formation.

The simple answer to all this is to get more guys flowing to the point of attack and overwhelm the blocking schemes.  However, Oregon will build checks into nearly every play.  Bring a CB blitz?  Better not motion that guy in before the snap, or they’ll run a quick swing pass to the now-uncovered WR.  Shade coverage over or bring a safety down?  Bubble screens and deep posts.  There’s an entire passing game that I’m not covering here that’s built in part on the same principles.  Oh, and we haven’t even gotten into the check-downs, bubble screens, and quick-outs designed to take advantage of defenses that get aggressive trying to stop the zone game.  So what the heck do we have to do to deal with this?

It helps to have the guy who completely shut down Oregon last year at home.  If anyone knows how to stop this, it’s him – and it begins with knowledge and discipline.  To be honest, I haven’t seen enough film to figure out if Kelly gets into patterns where he’ll consistently read the same player (or will consistently vary), but discipline will reign supreme here, especially on the defensive line.

It’s key for the defensive line to not get frustrated if they get confused (and this will happen, hopefully only once but realistically a bit more than that).  Montori Hughes, Chris Walker, and Malik Jackson in particular are critical here; they’re the leaders on the line, and Jackson is the only guy we have who’s seen this before aside from Wilcox  We’ll see a lot of situations where one guy is unblocked; the key is how everyone else reacts to it.

The other key is not tipping our hand.  There are check-reads built into this offense that I haven’t even begun to cover, so we need to be disciplined.  If we’re going to blitz, don’t show it until it’s too late for them to do anything about it.

Does Darron Thomas know how to run this offense?

Don’t get me wrong; Thomas in my mind deserves to be the starter, and Thomas is going to be one heck of a quarterback sooner rather than later.  He should have the ability to make most of the check-reads; remember that he’s been around for three years now.  But it’s not all roses.  He didn’t have the kind of game you’d expect against New Mexico (13-23, 220 yards, 2 TD, 1 INT), but the telling stat is that he had no rushes.  That’s generally been the case for his PT, in truth; the most carries he’s ever had in a game is six – and that was against Washington State, in 2008.  I don’t feel too bad if we sell out a bit to stop Kenjon Barner and force Thomas to actually be effective as a rusher.  Does it mean we get burned?  Maybe once, but I’ll take that chance.

What’s it add up to?

In a nutshell, there’s a chance.  I don’t think it’s realistic to expect the Oregon offense to be shut down on every drive, but I think we can get most of them.  Wilcox did a good job with Boise State two years running against this team, so there’s no reason to think the magic has disappeared.  Stopping this team can be done, and expecting us to do what Boise has done may be slightly short of fair, but certainly reasonable.

And if we can force Darron Thomas into having a bad game, so much the better.

There’s a ton of information out there on Oregon’s offense – specifically their run game. Trojan Football Analysis dedicated a whole section to their rushing game.  Smart Football has a few posts on Chip Kelly, along with this beauty that has some film from last season's Oregon-Cal and Oregon-USC games.