Breaking News: There Is No News On Bruce Pearl

Share All sharing options for: Breaking News: There Is No News On Bruce Pearl

This site has never been about breaking news. It may seem like we three main writers do nothing but follow the Vols around all day every day, but we're really no different than anyone else here. At any given moment, Will could be counseling grieving loved ones, encouraging parishioners to conquer their lesser selves, or freely giving hope to a cancer-ravaged patient without any. Hooper may be modeling nuclear fallout to preemptively protect the rest of us from our enemies and ourselves or doing one of a thousand important things that the rest of us can't even begin to comprehend. I may be stealing candy from babies and spitting on their mothers as a corporate attorney.

Bottom line, we generally can't ride the waves of breaking news at the time they come roaring to shore. We simply give our last two cents of the dollar of our days examining the diminished ripples remaining when we get home. But today our collective talents have uncovered a bit of information of which even ESPN, the World Wide Leader of sports information, is absolutely clueless. Hold on to your hair, folks, because we're about to blow your mind: There have been no new developments in the Bruce Pearl matter since November 18, 2010.

Just to make sure we're all starting from the same spot, let's review. I'll even use a graphic that I know must be helpful because I've seen it or something like it on every broadcast of every Tennessee game for the past two months: 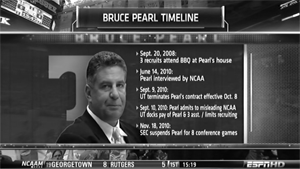 Pearl, in violation of the NCAA rules, had a few junior commits over to his house for a BBQ (the perils of being Jewish in the south, I guess) on September 20, 2008. When NCAA investigators asked him about it on June 14, 2010, he lied. On September 10, 2010, Tennessee imposed sanctions, and on November 18, the SEC suspended Pearl for eight SEC games.

From November 18, 2010 to today, January 17, 2011, . . . nothing. Well, nothing but leftovers of reheated Rehash Casserole for two solid months and 14 -- fourteen -- games. Listen, ESPN and the rest of you TV types, when your broadcasts have spawned multiple drinking games, your "news" has jumped the shark. Who do you think makes up the bulk of your viewing audience for Tennessee games? I'll wait while you consult with your focus group.

Right. Vol fans. And we already know all of this and are waiting for the other baby blue shoe to drop, but while we're waiting, we just want to watch the team that's out there competing without their head coach without being incessantly reminded of the impending potential doom. Thanks for bringing the Gameday trucks to Knoxville for the Vanderbilt game and all, but thanks a lot for spending the first 13 minutes of a 40 minute game talking about everything but the game. You could have done that from Bristol. As if that wasn't enough, somebody pressed play on the wrong Dick Vitale monologue in the second half, and we were treated to a two-minute rant that was identical to one he gave in the first. As if that wasn't enough, you trotted out an old video of Pearl talking about the ordeal when there was one minute left in a one point game. I don't know where they teach you to ignore actual events happening right now right in front of your eyes to read old news, but if that's the curriculum, congratulations, you pass.

And no, it's not just Tennessee fans. Who's the other major portion of your viewing audience for Tennessee games? Right. The opponent, and they don't want to hear The Bruce Pearl Timeline instead of the game, either. Even they have turned those stale news bits into a drinking game. Stop it, because you're going to kill somebody.

Look, I know Bruce Pearl has brought this on himself. I know that the Tennessee program and the Volunteer fans have also made a controversial decision to stick with him despite his imperfections. And I actually subscribe to the theory that stigma plays an important role in the societal system of justice and the goal of rehabilitation. When you screw up or do something questionable, a significant part of the consequence for that action is having to endure the disdain, skepticism, and distrust of others as well as having to rebuild over many years a reputation that was ruined in an instant. It's often the bulk of the price you pay.

But this is getting ridiculous. Absolutely nothing new has happened for 60 days, yet for 14 straight games broadcasters have presented the same stale information as if it broke just before the game tipped off. It's lazy.

You know, you could draw on that fancy journalism degree for which you paid so much money and spend some time brainstorming a new angle. That's what Gary Parrish did when he said that UT should keep Pearl warts and all, and I would say that even if Parrish had come to the opposite conclusion. You could do some research and a feature on Tony Jones, who's filling in for Pearl on the bench and in the orange jacket while he's serving his eight-game SEC suspension. You could find something, anything, new to say about the matter.

Or you could just trot out the Timeline for the 15th game in a row. Your call.