Are The Redactions In Tennessee's Notice Of Allegations Troubling?

Share All sharing options for: Are The Redactions In Tennessee's Notice Of Allegations Troubling?

This morning, Tennessee released several documents to the public via its website relating to the NCAA's investigation of UT Athletics. These documents included the NCAA's Notice of Allegations, a letter from the NCAA to Chancellor Jimmy Cheek, and statements from Cheek, Athletics Director Mike Hamilton, and head basketball coach Bruce Pearl.

The released Notice of Allegations is full of redactions -- portions intentionally blacked out so they cannot be read. This isn't out of the ordinary. Such reports often contain confidential information about individuals and other things that are not for public consumption. Clay Travis this morning via Twitter opined that the redactions were exactly what you'd expect -- obliterations of certain individuals' names, particularly those of football hostesses. With all due respect to my friend, I'm not so certain.

Let's take a look at a couple of the more perplexing ones. First, a baseline.

This to me looks exactly like what you'd expect and isn't alarming at all. It's probably a redaction of names of junior recruits who can't be identified because they aren't current NCAA players. The other guys are, though, so they're identified. Fine. No problem. 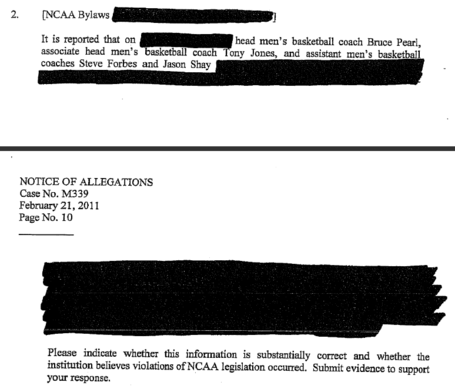 This one's more problemataic. Note first that the citation to the Bylaw is redacted. Why would that be? I'm not saying that this is the case, but I honestly can't think of any reason to redact that other than hiding what the alleged violation might be. In the meat of the paragraph, it's the verb -- the most important part -- that is redacted. What did Pearl, Jones, and Forbes do? There are probably six lines of information redacted, and it certainly doesn't look like a mere list of names. 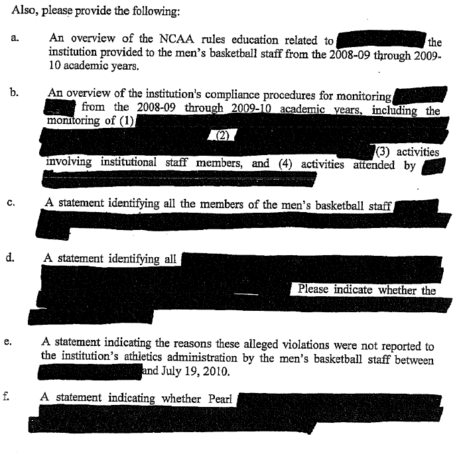 More of the same. (There are also two more subparagraphs (g) and (h) that are similar but not in the screen cap.) Further redaction of the citation to the rule allegedly violated and what appears to be the specifics of the rule. In (c), more redaction of the key verb. Subsection (d) is almost completely obliterated except for the tantalizing "Please indicate whether the . . . " Yes, please do. Ditto sub (f). Whether Pearl did what? Why leave unredacted the details in Section 4 about Pearl's "providing false and misleading information to the institution" and encouraging Aaron Craft to assist in the cover up but redact . . . something else as to whether Pearl did . . . some unspecified act in violation of some unidentified rule? Perhaps there's an explanation. But what is it? 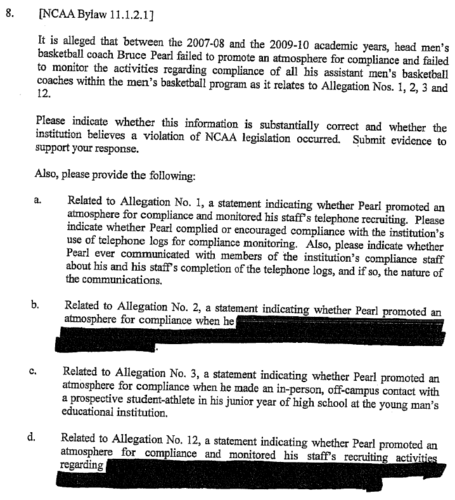 Again, why the redaction in Section 8(b)? They want the school to make a statement regarding whether Pearl promoted an atmosphere of compliance when he did some redacted act, which is presumably something other than lying and asking a recruit to back him up because that was disclosed in detail.

That's just the basketball stuff. There are redactions in the sections dealing with football, but they appear to be for the purpose of protecting identities over which the NCAA doesn't have authority, which is what you'd expect.

Perhaps there's a perfectly appropriate explanation for this other than what I fear. Perhaps it's just sloppy and inconsistent redaction. I hope that's all it is. But Mike Hamilton also said in the statement he released with all of the other documents this morning that "most items noted in this document have already been reported broadly."

Most? Which ones haven't? The details and minor matters that are unredacted but unalarming? Or the secrets behind all the Sharpie tracks?