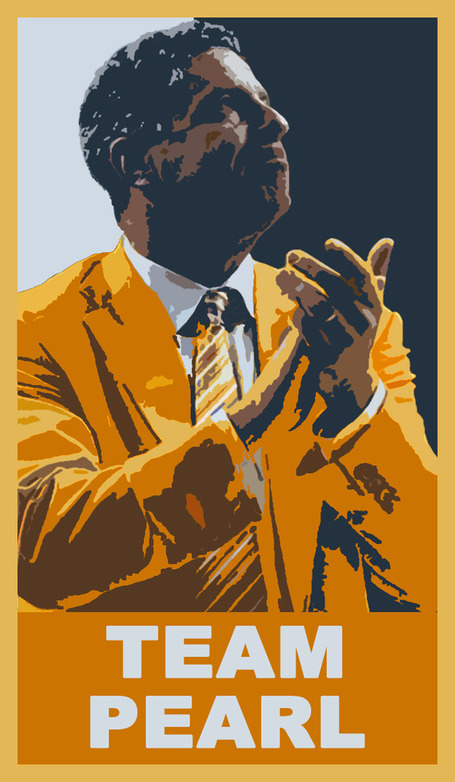 A huge thank you to Mrs. Hooper for creating this for us

I'm off the fence.  Not sure I was ever really on it.

Bruce Pearl should stay as the basketball coach at the University of Tennessee.  I believe this more now, on the heels of what is by far his worst loss, than ever.  Maybe it's only when the end could be painfully close that we fully realize what we're about to throw away.

I remember watching Phillip Fulmer's press conference, announcing his forced resignation.  The events of the past few months had exhausted and divided the fanbase, and when Mike Hamilton pulled the trigger, a majority of us believed it was the right thing to do.  Maybe the only thing to do.

But watching that press conference, you also realized something else:  what we were giving away we wouldn't find again.

No one loved the University of Tennessee more than Phillip Fulmer.  Even if we hadn't ended up trading him for Lane Kiffin, we gave away a Vol For Life - because no one has ever embodied that term more than Phillip - for someone without the personal connection to the university.  That didn't make it the wrong decision, then or now.  But it made you realize we wouldn't find one like Fulmer again.

Bruce Pearl is a Vol By Adoption - an outside the culture, outside the family hire.  But no one has done more good for the University of Tennessee in the last six years than Bruce Pearl.  He became - he is - one of us.

And if we let him go now, we may never find one like him again.

(Let me preface the following with this:  I do not believe it is within the realm of possibilities for the Vols to retain Pearl if he is hit with a multi-year suspension.  A program can survive and manage without its coach for one year.  But more than one year is too big a problem for any institution - too many issues in recruiting, leadership, direction of the program, chemistry, etc.  So if and only if Mike Hamilton and the powers that be have somehow been made aware that the NCAA will hit Pearl with an additional two-or-more-year suspension if he remains employed at this university, I do not believe there is any argument that could save any coach in that situation, and all of the following will not matter.)

In October I'll turn 30 years old, and lived in Knoxville every day for the first 24 of them.  My Dad took me to games as soon as I was old enough to understand what I was seeing.

In 1996, Kevin O'Neill took a 13-13 Tennessee team - sixth in the SEC East - to the SEC Tournament, needing one win to make the NIT.  And I remember staying up late to watch Steve Hamer set a tournament record for rebounds in the last game on Thursday, as the Vols beat Alabama.  I remember cheering like crazy for that team, who made UT's first postseason appearance of any kind in seven years.  They got bounced on Friday in the SEC Tournament and lost the first game in the NIT.  But that was success.

In February of the following year, we played Kentucky in Knoxville.  The Cats had won eight straight in the series.  They only beat us by ten.  I left the game genuinely excited, thinking about how close we were getting.  That was success.

Anyone who calls today's loss the worst in the history of the program shows their age or their ignorance:  in 1999 Jerry Green's second team made it to the second round as a 4 seed.  In the second round, we lost to 12 seed Southwest Missouri State, 81-51.  It was the exact same margin in a matchup we had ten times as many reasons to win, with exponentially fewer distractions.  It is the most embarrassing single game display I've ever seen from a Tennessee team that mattered.  It was John Ward's final game.  But two days earlier we won our first tournament game in sixteen years.  So overall, that was success.

This program has a history of getting it half right on its basketball coaching hires.  Kevin O'Neill recruited the players, Jerry Green won with them.  Green made four straight NCAA Tournaments, won an SEC Championship, and took Tennessee to its first ever Sweet 16 (since the field expanded to 64 and it took two wins to get there).  We fired him.

Don't get me wrong - anyone who was around back then was happy to see him go.  Green's "If they don't like it they can go to K-Mart" interview was the dumbest in the history of the program.  Mike Hamilton gave him a run for his money this week.

But Green is the best example of the fact that it's about more than wins and losses.  His incredibly successful run put an average of 15,500 butts in the seats every night.  His successor dipped it into the 12,000s in his final year.  Pearl gets 19,000+.  If the powers that be at Tennessee understand anything about what's at stake here, it's this.

And don't forget, Buzz Peterson was a great guy.  He was a safe hire.  He made a pair of NITs in year two and year three.  We called it "the process".

So let's say the next guy comes in here and makes the NCAA Tournament three out of five years.  He makes the NIT the years he doesn't.  He puts together two good recruiting classes in a row, and one of his teams in that five year period wins two games and makes the Sweet 16.

That is what I believe to be fair criteria for success in basketball in the SEC if you are not Kentucky or Florida.  Other than Kentucky, Florida, and Tennessee, you know how many SEC teams have made the Sweet 16 during Pearl's tenure?  LSU made one.  Vanderbilt made one.  That's it.

At any other point in Tennessee Basketball history before 2006, we call the guy who does that one of the best coaches we've ever had.

But we can't go back.  And under Bruce Pearl, we call that stretch below average.

You know it all:  six straight tournament appearances, three division titles, an SEC Championship, a number one ranking, three Sweet 16s, and the first Elite Eight in the history of the program.  Bruce Pearl is a dream that, before this year, kept coming true.

He is not bigger than Tennessee Basketball.  He is the best thing that's ever happened to it.

Depleted roster.  Looming NCAA sanctions.  But more than that, the knowledge that whatever you do, it won't be as good as what the last guy did.

If we fire Pearl, the very first goal I'd put on the new guy is, "Make the NIT by year two."

That's the reset button, boys and girls, and maybe we're going to hit it either way.  So do you want to hit it with the best coach in the history of the program...or do you want to hit it with Random Coach X?  Even if Pearl is hit with a one year suspension and a one year tournament ban, the powers that be need to have the eyes to see that next year is going to be a struggle if Hopson and Harris go pro.  They also need to see Tony Jones sitting over there, and know that we could do each other a real favor - Jones has the experience already, and he gets a one year national audition.  We could survive a year of this.

It's also true that Hamilton made a move on Fulmer with the support of the people - he didn't have everybody, but he had the majority by the time it was all over.  The powers that be will not have the people on this move.  Two-thirds of our readers voted to keep Bruce Pearl on Thursday.  A staggering 91% support Pearl over Hamilton in a Knoxville News-Sentinel poll.  If Jimmy Cheek and/or Mike Hamilton move on this, they move against the people.

If there are additional violations that we don't know about, okay, fire him.  If we keep him and he commits another violation or covers something else up, okay, fire him.  Based on my understanding of the bump violation, I'm willing to buy the viewpoint that the coaches did not consider it to be a violation at all.

But what you have today is what you've always had:  a coach and a program that desperately need each other.

When the SEC suspension was announced, we first compared Pearl and Tennessee to a marriage.  And that's what it is.  Tennessee - and Mike Hamilton - pulled Pearl out of obscurity, giving him the chance that he wasn't sure he was ever going to get.  And he spent the first five years showing us how grateful he was.  When Mike Hamilton pulled the trigger on Fulmer then got burned by Kiffin, he needed Bruce Pearl.  And Pearl kept him afloat.

It's been Hamilton's own analogy that Tennessee Basketball needed an evangelist.  And resurrection is exactly what we got.

Pearl made stupid mistakes, and Pearl was dishonest.  We deserve to be punished.  Pearl already has been, and will some more.  It's his fault and he hurt us badly.

It's the dishonesty that's always bothered me most - not just the lying to the NCAA, but the culture of dishonesty that we introduced a recruit and his family to on our campus.  That, in my eyes, is Pearl's greatest sin.

RockyTopTalk exists as it does today because of Tennessee fans.  We who write on the front page do so because we love the Vols.  We also work hard to set bloggers free from their parents' basement.  Joel Hollingsworth is a lawyer.  David Hooper is in nuclear engineering.  I'm a pastor.

It's my job and my life to value truth.  To believe that, even for the university I love the most, there are more important things than winning.  That right and wrong do exist, and in this case Bruce Pearl did wrong, then lied about it.  The path of condemnation is very much before us.

But I believe in redemption.

This marriage is worth saving.  We can survive without each other, but it will not be the same.  And I do not believe that Bruce Pearl and Tennessee Basketball will ever be as good apart as we are together.

Stand by the man who has done more good for us than anyone, ever.  Take the punishment he deserves.  Fight through it together as a family.