Bruce Pearl's Greatest Hits: Why We Love Him Anyway

Share All sharing options for: Bruce Pearl's Greatest Hits: Why We Love Him Anyway

I wrote the bulk of this post last night, before Tennessee released the statements of Mike Hamilton and Chancellor Jimmy Cheek saying that they were essentially left with no choice but to withdraw their support for the retention of Bruce Pearl because of additional unspecified NCAA violations and some non-NCAA issues as recently as a couple of weeks ago. I went to bed thinking I wasn't going to be able to use this because the support and love we'd shown the coach throughout the past several months always assumed that his misdeeds were behind him and that the alleged bump violation was really nothing more than an allegation of something that didn't actually break the rule. An "additional violation in March" shatters that assumption and blows the argument up.

This morning, we learned that the new violation was for giving extra tickets to a player or a player's family. Assuming that's true, it's an actual violation, and it gives credence to Hamilton's and Cheek's decision. Under different circumstances, it probably would have been a minor issue, but there's the rub. The circumstances are what they are, and they created an atmosphere in which Pearl and his staff were going to have to be not only in absolutely perfect compliance with an over-thick morass of inconsistent and inconsistently applied rules and regulations, but also above any appearance of impropriety. The former is probably impossible, and the latter is most certainly so, and the alleged bump violation and the extra tickets just drive home the point.

So on the turbulent waters of this story, this morning I find myself concluding that the UT administration did what it had to do but also that it doesn't diminish very much at all my high opinion of Bruce Pearl. And that brings me back to the post I originally drafted last night.

Regardless of how everything went down and where you stand on it, there can be no doubt that Mike Hamilton made good on one promise he made to Pearl back in 2005 that he could be an "absolute freaking hero" in Knoxville. Folks without orange corneas may have trouble understanding the outpouring of support for a coach who, by his own account, brought this tragedy on himself, but that's just because they didn't experience the past six years with us. Pearl walked into Knoxville in 2005 as death rattles of the program were echoing off the walls of a cavernous arena. To make matters worse, the football program that had begun the season ranked in the top 5 had just capped off an absolutely horrid season with a loss to Vanderbilt. Into this atmosphere, a completely unknown Jewish yankee came to the South and almost immediately and entirely stole our hearts by standing on tables in the cafeteria promising that we'd be proud of his teams and their effort, working the concourse after games, and asking his guys to do the same. Yes, he won, too, but really it was much, much more than that. I could go on and on with the praise and never really get close to adequately articulating the positive emotions Tennessee basketball fans have enjoyed over the past six years because of Bruce Pearl, emotions that yes, actually overwhelm all the negatives and make us quick to forgive. And really, when did quick to forgive become a bad thing anyway?

So I surely won't succeed, but here's my humble attempt to help passers-by understand why I love Bruce Pearl and why I'm sad to see him go even though I know he must. Consider it a reading of Bruce Pearl's Record of Rights.

Pearl won almost immediately in his first season, going 22-8 and taking the team to the NCAA Tournament for what would become a school-record six times in a row. That year he beat Texas, Florida twice (once in the soaker hose game), and Kentucky once, a game that led to one of the first defining moments of the Pearl Era:

Yeah, the man was passionate. He stomped and screamed and shed his jacket in fits of emotion that often earned him "special consideration" from the officials, which in turn led his players to greater and greater effort and his fans to embrace his tendency to Hulk Up. We eventually concluded that Bruce Pearl was actually Bruce Banner (yes, we know the difference between Hulk Hogan and the Incredible Hulk, but we don't care), and led to a series of Hulk Smash posts in which we identified Florida as The Abomination, Kentucky as The Wendigo, and Vanderbilt as The Leader. That season (2006-2007), Tennessee finished 24-11 and played in three games in the NCAA Tournament before falling to Ohio State in the Remember the Alamodome game, a bump in the road that nevertheless spurred the program on to bigger and better things. Basketball was fun again, regardless of how the season ended.

In 2007-08, the Vols finished 31-5 and again played in three games in the NCAA Tournament, but the season will always be remembered around here for the Pearlfection game, a game that lives in perpetuity on the RTT sidebar. It was undefeated #1 Memphis vs. #2 Tennessee, Calipari versus Pearl, and everybody was talking about it. Actually, they were mostly talking about Memphis, at least until Pearl's Vols ruined the Tigers' perfect season on their home court and took the #1 ranking right out of their cheating, girlfriend-abusing hands:

894. The approximate number of times we heard the word "perfect" or some variation thereof during the hours leading up to, and throughout, last night's showdown between the No. 1 Memphis Tigers and the No. 2 Tennessee Volunteers. The Tigers were well on their way to joining the ranks of the elite and earning the lofty label of Perfect.

Memphis retailers could sell thousands of blue I Hate Orange t-shirts to zealous fans. The University of Memphis athletic department could deny ESPN's request to pack out the FedEx Forum with half Tiger fans and half Vol fans and instead limit admission to 3,500 Memphis fans. They could even somehow orchestrate a distribution of tickets to Tennessee fans such that no two orange outfits would be contiguous to each other.

And that's not all. Memphis head coach John Calipari could intentionally refer to Memphis native J.P. Prince as "P.J." instead of his rightful name, attempting to relegate his importance to something approximating the utility of nightwear. Sticks and stones, coach. Sticks and stones. Memphis players could even devote an entire evening to wrapping Chris Lofton up in a tight little taquito shell and hold him to 2-11 shooting from the field and 0-4 shooting from behind the arc.

They could do all of that, but they could not be Perfect.

To be fair, Tennessee couldn't do everything it wanted to, either. But the Tennessee team aspires not to be perfect, but Pearlfect, to reach that state in which one player's weaknesses, whether permanent or temporary, are offset entirely by a teammate's enduring or fleeting strengths.

This night belonged to J.P. Prince, and that was only fitting on an evening when the media was unashamed of its infatuation with the former wife of the King of Rock and Roll. Prince's talents, wildly inconsistent and imperfect for much of the season, this night demanded the spotlight. Call him Flannel Pajamas if you wish, coach Cal, but J.P. was the opposite of flame retardant at your place, and he lit you up, sir, shooting 5-8 from the field and 3-4 from the stripe and adding to the stat sheet four offensive rebounds, four defensive rebounds, one block, and two steals on his way to 13 points. Imperfect on the season, Pearlfect Saturday night.

That's just the way this team operates. When one player comes up short, another steps up strong in some unexpected manner. So while Dick Vitale was fawning over the future NBA stars on the Memphis roster, Memphis native and Volunteer big man Wayne Chism was stepping out beyond the three-point line and knocking down shot after shot after shot. When Chism wasn't raining threes, JaJuan Smith was. When Juanny wasn't getting open, Tyler Smith was driving to the bucket. When Chris Lofton wasn't hitting shots for the entire game, no one panicked, and yes, there he was at the end, securing the game-winning rebound and icing the game with free throws.

That, my friends, is Pearlfection.

Pearl gave us that night and that memory. He gave us, in an imperfect way, glimpses of something approaching perfection.

Pearl took Tennessee to the NCAA Tournament in 2008-09 as well, and then, last year, after the team appeared to have self-destructed with a New Year's Day arrest of multiple players, he dismissed the primary culprit (who also happened to be the team's best player), doled out long-term suspensions to the three other guys mostly just for being at the scene, and led the team to a victory over #1 Kansas mere days later. He eventually took the team to the Elite Eight, further than any other team in Volunteer history, and one point away from the Final Four. The post-Sweet Sixteen locker room remains the stuff of goosebumps for us Big Orange Fans:

This season, it all came crumbling down and did so in heart-rending slow motion. But sports is about passion, and it's about memories of passionate moments, and Pearl gave us plenty that we will always hold dear. Regardless of how it ended, we will always have those memories, and we refuse to permit others to tell us those memories are somehow tainted by mistakes that had nothing to do with the outcomes of games. It is, after all, an imperfect world, and we will take whatever good things from it we can.

Here are a few more items in Bruce Pearl's Record of Rights. I'm sure I've missed some, so share your memories in the comment section below. Thanks for all of the great memories, coach. 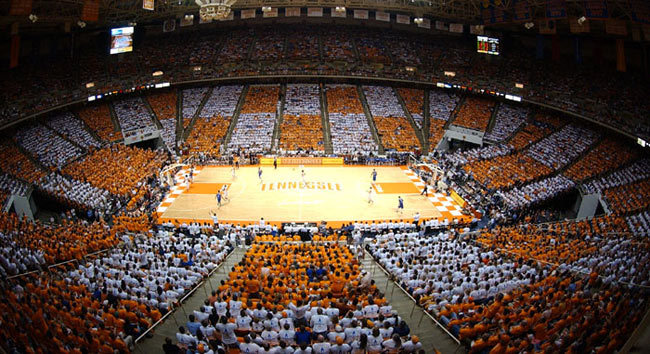