Share All sharing options for: Bray and his Orange squad humbly predict a 28 point first half

The Vols had their final practice of the spring, and all that is left is the Orange & White game at 2pm tomorrow. As you've likely already seen, the rosters for the two teams are set (I'll put the fancy cheat-sheet graphic after the jump)

The burgeoning legend known as Tyler Bray will be bringing his confidence with him to the Orange & White game on Saturday. Check it: Tyler Bray Interview. It isn't clear from the video who his co-conspirator is, but their plan to drop 28 on the White squad in the first half alone is certainly premeditated. And I dig it.

I'm gonna give y'all an opportunity to chime in on this question in the below poll, but in my humble opinion the Bray + Hunter combination is the end of the discussion. I think the Orange squad will roll.

What I don't dig so much is Jacques Smith's foot injury that will have him out of commission for about 3 months. No time is a good time for injuries, but now is a much better time for an injury than, say, August. Especially since Smith might just be our best defensive linemen, or so say his peers:

"I think he's the best defensive lineman we have so far this spring, so seeing him go down was a hard pill for us to swallow, but we're going to be all right," Fowlkes said. "He's going to get better and he's going to be ready for September when we play Montana."

Chris Low of ESPN stopped by campus to check in with the Vols and do an interview with Da'Rick "conqueror of the Night Rick" Rogers and another interview with Prentiss Waggner. I was a bit bewildered that he posed the following the question to Da'Rick:

You know, we were talking earlier as well. You could have gone just about anywhere in the country. You were committed to Georgia for a while, you chose Tennessee at the last minute. As you look back at that decision, any regrets?

This arguably made me want to punch him (Low) in the face...and so that's all I'll say about that.

After the jump, your previously-promised cheat sheet, and some quick hits from this basketball round-up:

He's a student of the game and someone who plays with great competitiveness. He's a quick, athletic guard who knows how to run a team. 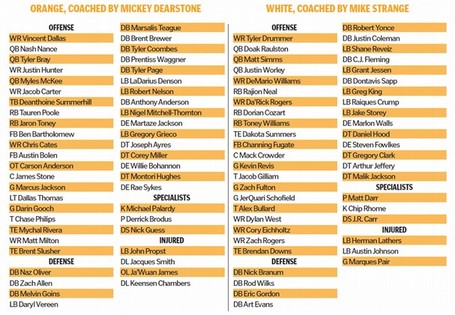