Can the 2011 Tennis Vols win the whole thing?

Share All sharing options for: Can the 2011 Tennis Vols win the whole thing?

The draws for the men's singles and doubles (i.e. the non-team) portion of the 2011 NCAA Tennis Championships were made available for all to see this Wednesday evening.  The singles competition is a 64-player single-elimination tournament.  16 of the 64 players are seeded, and two of the those 16 players happen to be Vols.  Sophomore Rhyne Williams is the #4 seed, and Senior John-Patrick Smith is the #16 seed.

The doubles competition includes 32 doubles teams, with only 8 of them getting seeds. The color orange will adorn this year's top seeded duo.  Seniors Boris Concik and John-Patrick Smith --  who are the top-ranked duo in the nation by a fairly comfortable margin -- have (not surprisingly) been pegged as the team to beat.  The duo has prevailed in all but a single match this year, boasting a record of 17-1.  Inside sources inform me that the lone blemish on their record may in fact be the direct result of an elaborate media fabrication.  My sources are of course anonymous.

The singles competition begins on May 25th, and the doubles the day after.  The team competition is first, and so that's our first order of the business here today.  The Vols serve things up in their opening match against Radford -- at the friendly confines of Barksdale Stadium -- on Friday May 13th at 1pm.  The Vols will win that match, and if they don't, then you have permission to punch me in the face.  After the Vols win that match, they face the winner of Vanderbilt/Virginia.  The Vols will beat either Vanderbilt or Virginia Tech, and if they don't, then you once again have the green light to punch me in the face as hard as you like.  Seriously...as hard as you like.

For the next match (the round of 16) -- and all ensuing matches -- the Vols will be going (going) back (back) to Cali (Cali) to hit their forehands, backhands, volleys, and the like at the old college stomping grounds of John McEnroe; namely,  the Taube Tennis Center in Stanford, California .  It is at this point that the analysis becomes less straightforward, more interesting, and -- for better or worse depending on your perspective -- completely devoid of free opportunities for you to punch me in the face.

The University of Tennessee Men's Tennis program has to be a bit sick of finishing second.*  The Volunteers were national runners-up in 1990 (lost to Stanford), 2001 (lost to Georgia), and 2010 (lost to USC).  Coach Winterbotham is sick of it too, as his squad finished second at the National Indoors in 2010.  And then again finished second at this year's National Indoors. Both losses came at the racquets of UVA.  Remember that name UVA.  We'll come back to them.

*To be fair, UT has produced an NCAA champion in singles.  (None other than Chris Woodruff, our associate coach who won it all back in 1993, had a moderately successful pro career, and then -- after retiring from pro tennis -- joined the UT coaching staff in 2002. I hope he sticks around for many many years.  I'll elaborate more on this at a later date, but I think UT tennis is in very good hands with Winterbotham/Woodruff.  With these guys running the show, we'll remain elite.).

This may sound cliche or obvious, but the objective of this team is to bring back the big prize.  Winning the SEC regular season is always a nice accomplishment considering the strength of the league.  But we won last year, so it wasn't a *new* accomplishment.  The new accomplishment is winning the NCAA Championship.  And it is very much within the realm of possibility.

We lost only one major contributor (Davey Sandgren) from last year's second place team.  We have a solid senior class in John-Patrick Smith, Boris Concik, and Matteo Fago.   We have a 2-time SEC player of the year (Smith) who might not even be our best player.  That honor arguably goes to Sophomore Rhyne Williams. So why not us?  Why shouldn't this year be our year?  Well, it could be.  But we aren't the only good team.  Here is how the top ten teams shake out according to the ITA rankings. 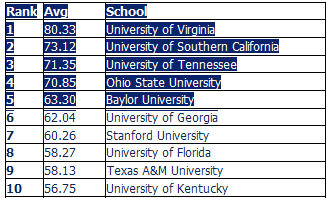 The first major challenge will take place in the round of 8, where we will more than likely be matched up against Georgia.  Historically, Georgia is always a good team.  And as you can see above, Georgia has a good team this year.  However, we have played them twice already this year, prevailed on both occassions, one of which was just two weeks ago.  Both matches have been tight, but they've been tight mostly because Georgia has solid doubles teams.  The Bulldogs haven't been able to match our firepower in the singles matches, and I don't see that changing over the course of two weeks.  Thus, I'm going on record as predicting that we beat UGA and earn ourselves a rematch of last year's finals in this year's semifinals.

If we get over the Bulldog hurdle, our most likely opponent is USC.  The Trojans of course beat us in last year's finals, but I believe there is a good possibility  that the  Vols exact a little revenge on the Trojans and earn themselves another trip to the finals.  My prediction here is only a little bit bold.  As you can see from the above rankings, there is very little difference between the Vols and Trojans as seen from the eyes of the ITA algorithm.  Also, USC's best singles player is named Steve Johnson, and he is very good -- the top ranked singles player in the country.  There are probably only two guys in the NCAA that can beat Steve Johnson.  But one of those guys is named Rhyne Williams.  He beat him in the National Indoors en route to winning the event outright.

Here is why that is key.  Williams for the most part has been playing at the #2 singles spot this year, with John-Patrick Smith playing #1 for us.  This is mostly for reasons of consistency.  I believe that Williams on his best day can beat any player in the NCAA.  Now what you are about to read is speculation because my last name is not Winterbotham and doesn't even end in a 'W".  But what if we switched up Williams and Smith for this match (and probably the next too, if we win).  Smith will very likely beat USC's number two guy.  If Williams can play like he was playing a couple months back and take out Johnson...well then that would be what I like to refer to as "ballgame".  Our doubles are too good for them to overcome that deficit, if it were to play out like that.

The elephant in the room is UVA.  I'll be honest, folks, I don't know if we can beat those guys.   Here is the deal.  You can take the entire above paragraph and substitute it in here, and just replace "Steve Johnson" with "Alex Domijan", who is UVA's superstar freshmen who will almost certainly go pro after this year.  Williams can beat him.  He did it at the indoors.  But the problem is, against UVA, the rest of the dominos don't simply fall into place by putting Williams in  the #1 spot and seeing if he can get the big win.  What I mean is that UVA's #2 guy is really really good in his own right (ranked #5 by ITA).  Smith may or may not be able to beat him.  So, as much as it pains me to write all of these words and have them conclude with something other than a glorious victory by the Tennis Vols....I think the fact of the matter is that UVA is just really really really good this year.  They'll be a tough team to beat.