It's The Numbers Game: Muschamp, Chaney, and Mind Games

Share All sharing options for: It's The Numbers Game: Muschamp, Chaney, and Mind Games

This is when the season gets fun. It's one thing to be rebuilding, in the wilderness (and in the Kiffinness, and let's not talk about that game thankyouverymuch) and in search of anything that looks like progress, but it's another to be, well, 2-0 and looking for the first signature win of the 2010 class. (No, Memphis doesn't count, and they certainly won't count after Austin Peay beats them on Saturday.) In Tennessee's way stands a heated rival, although it's a heated rival who dove headfirst into their own set of issues last year. It's also a heated rival that didn't have a football team before 1980 or so, so they have that going for them, which is nice. Now, facing a new coaching regime and new hopes for the Florida fanbase, it's up to Tennessee to take that first step to deflate the new-look Gators.That begins with employing a decided schematic advantage Jim Chaney. (Well, sure, it also can begin with defense, but check the author. This is strictly Dark Side material.)

A Large Dash of Vanilla

Let's start with the basics: we haven't seen much out of Florida so far on either side of the ball. That happens when you play teams whose total firepower is the approximate equivalent of a pop gun, but no matter. We have as much game tape of the Will Muschamp-Charlie Weis Gators as anyone, so we'll have to make do. As a result, we're left to go with what Muschamp has done before, and what his roots are.

Muschamp, like our orange-pantsed wonderkid Derek Dooley, is a Saban disciple on defense. This means a lot of things, but the basics are simple: play solid base defense on first and second down using a 4-3 / 3-4 hybrid combination, and then unleash the dogs on third down. There's a lot that can be done with the hybrid defense (flexibility being chief among them), but in the interest of not having a 15,000 word article, I'll conveniently gloss over the details. Regardless, Muschamps' defense is normally designed to stop the run first and foremost, which is probably a smart idea in the typically run-first SEC. Let's go to the chalk: 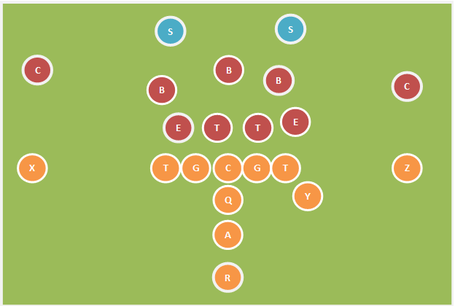 This is as plain as they come in terms of base coverage. This look can either be 4-3 (as shown) or you can pull one of the DE up and play a slightly unbalanced 3-4, shifting into a two-MLB / two-OLB look. This is a very easy way to get seven into the box provided the offense plays nice (and I suspect we will, for the most part). With the TE set shown from the offense - which is something we'll do frequently - one of the safeties can come down in run support. That's because they all have assignments: 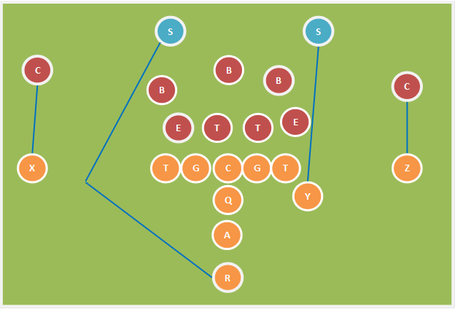 While this defense looks like a Cover 2, and Tyler Bray would typically signal like a Cover 2, Muschamp plays a defense that's actually called Cover 4 Man.(Yes, Bray's going to spend all week learning about this.) Without getting into too many specifics, it's essentially man coverage on the outside receivers with the safeties picking up the inside receivers; in this case, the only real inside receiver is the tight end (Y in the diagram); I'm not 100% sure if the other safety would take the running back (R in the diagram) or the fullback (A in the diagram), but for simplicity's sake I'm assuming the safety has the RB.

While it's easy to look at this defensive alignment and go "hey, we have 1-on-1 coverage with Justin Hunter and Da'Rick Rogers - awesome!", it's not that simple. For one, a 1-on-1 matchup isn't a guaranteed win (you want 2-vs-1, or 3-vs-2, or some other personnel combination that leaves a man free); for another, the safeties can still shade into pass support if Tennessee immediately shades or shows pass. The safeties have a very flexible role.

What this defense allows Muschamp to do is stop the run first and foremost. In addition, the pass rushers can freely get into the backfield. That's the offensive line's duty to stop but Bray needs to be aware of the danger of the pass rush and not hold onto the ball too long. Attacking this defense - which looks much, much different than anything he's faced in his college career so far - is going to be Bray's biggest challenge, but there are ways.

Are Hunter and Rogers good enough to consistently beat tight, lock-up one-on-one coverage with safety support? Well, maybe, but let's not count on that. It's better to take advantage of routes and schemes designed to exploit this type of defense: 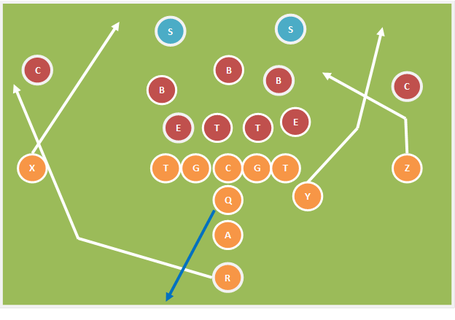 Ideally, Bray would look to pick up the Z receiver (we'll say that's Hunter in this scenario), as the tight end/receiver action makes man coverage somewhat difficult unless the safety and corner on that side do a good job switching. If they do, then the hope is that the play action between Bray and Poole baits the safety assigned to Poole up enough for the X receiver (Rogers) to effectively get behind him. Ideally, Bray hits Hunter right as he completes his rub with the tight end. There are other options, though. 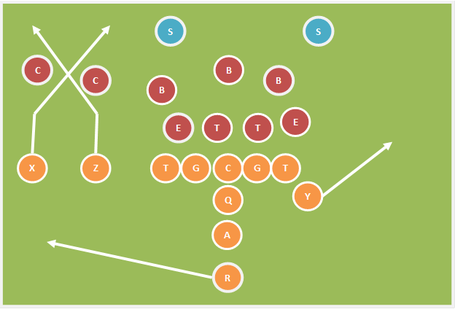 Again, we're looking at another crossing-type route. Sense a trend here? As long as Florida is playing in some kind of man defense, Tennessee will look to run some kind of crossing-type route to force Florida's response. (Nick Saban typically deals with this via communication between the guys who are getting crossed up, so they can switch and still leave everyone covered.) It's more than that, though.

However, a lot of this hinges on the danger of a running game. To that extent, Tennessee will need to play into Muschamp's hands a bit, or at least act like it. If Muschamp is looking to stop the run first and foremost, then Tennessee will need to show that they can run. Mind you, they don't need to run enough to actually win the game; they simply need to run enough to get the safeties to bite up on a play fake. To that end, it'll fall to Tauren Poole to present enough of a threat on the ground to actually force a safety to come up a bit. It won't take much; both Hunter and Rogers are good enough to take advantage of a safety slightly out of position.

However, there's one serious numerical advantage I've glossed over in all of this: I don't know why it took me that long to realize this, but there's a reason that all the graphics I've used have been of an I-formation with a tight end. It's simple, really.

It shows run. Rather, it shows the definite danger of run, with a declared strength (in this case, the tight end forces an additional gap the defense must account for). It's not typically a passing formation - the four-wide, five-wide that screams spread looks a lot more like a passing formation under Jim Chaney - but we're in an interesting position. Hunter and Rogers are pretty clearly Tennessee's two elite receiving talents.  Instead of loading the opposing defense up with cornerbacks and safeties (otherwise known as guys who can cover Hunter and Rogers, at least when compared to linebackers), playing with a 1-TE, 2-RB or a 2-TE, 1-RB formation forces the defense to respond accordingly. In a perfect world, they'll actually replace one of the safeties with a linebacker, which gives Hunter and Rogers more potential space.

However, it's not like Tennessee will look to load a heavy backfield to allow Poole all day to run. It's simply, well, a numbers game.