Targets and Routes: Staying Alive In a Post-Hunter World

Share All sharing options for: Targets and Routes: Staying Alive In a Post-Hunter World

First things first: we're not dead in the water offensively without Justin Hunter. Sure, there's no easy replacement for a guy who will continue to rank among the national leaders in yards per game until there have been too many games played, but there are ways. Once again, In Chaney We Trust. The absence of a proven, elite deep threat doesn't negate the idea of a deep ball - for one, Da'Rick Rogers is still a capable deep threat (you don't really need two elite deep threats on the field at all times to stretch a defense; there's a very real change that Rogers can do 90% of what Hunter does, which may be all we need), and for another there are things that we can do schematically to stretch opposing defenses. It all comes down to vertical stretches, and for those we just need capable receivers. There are ways.

We'll begin with quite possibly my favorite route combination - smash. 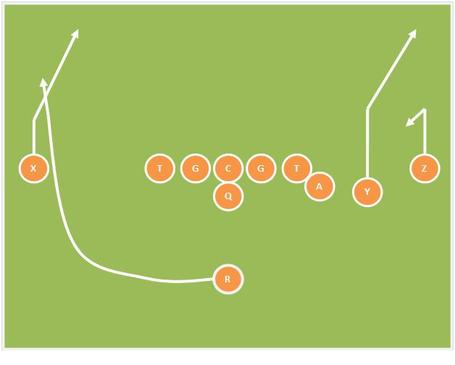 In this, the key guys to pay attention to are the corner/hitch (Y and Z, respectively). Ideally Tyler Bray would look to hit the Y receiver - we'll call him Zach Rogers for the purposes of this conversation - on the corner route for a nice 12-yard gain. If he's not open, then Z - again, we'll just call him DeAnthony Arnett - should be available on the hitch. (This is a classic high/low read.) I'd actually split Da'Rick off as the X on this and just send him deep for a couple of reasons; coverage is going to be shaded to him anyway, and sending him deep might spring Tauren Poole for a nice gain on a wheel route. The tight end (Mychal Rivera?) stays in as an extra blocker, but can check-release to some spot about 5 yards upfield if need be.

However, Da'Rick and Poole (and Rivera) are basically excess in this play. The key is that Y/Z smash; neither route is terribly complex to run, but it puts any cornerback there in a world of trouble. There's a high-low press on the same corner, which in effect overloads that zone. One of those guys should be open, especially in a Cover 2 or Cover 4. With Cover 3, it's a bit trickier, especially if the safety decides to get up and jump the route; there should be some other option built into the play (likely getting Rivera out in the same area to create a 3v2 situation): 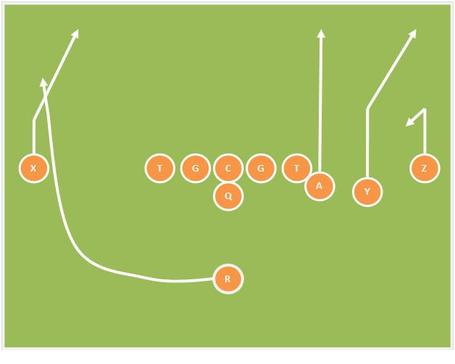 This looks similar as the previous play - and truth be told, I'm not enamored with what I came up with, but it certainly works. Rivera isn't exactly an easy deep threat, but If Da'Rick draws the middle safety toward him (which he should) it leaves the strong-side safety in a horizontal bind between Rivera and Zach. With rotated coverage, Da'Rick has to beat a 1v1 situation, which he should be able to do. Still, that's not our only option. Another option is called follow. 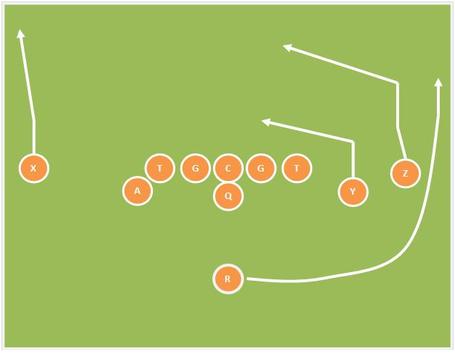 This isn't the ....well, this isn't the best diagram for follow, but the basic idea is that Y/Z - there's Zach Rogers and De'Anthony Arnett again - create some more high-low pressure. Again, this is a Cover 2 type route, and if done well there's a wheel route waiting to happen there as well. Da'Rick once again gets to run deep. It should also be noted that as long as we're in a balanced formation - which this is - Da'Rick and Rivera can run the follow as well. That would likely happen with another tight end or fullback in the formation, though. Against Cover 3, Rivera likely releases into the formation and Tauren Poole would check-release. The wheel route isn't that useful unless Bray can hit Poole in the gap between zones, and given how slow-developing that route is, check-release to the flat just makes way more sense. Again, those are adjustments that Bray can make at the line, and isn't it nice to have a QB who can do that?

There's a nice adjustment to follow as well, called follow-pivot. 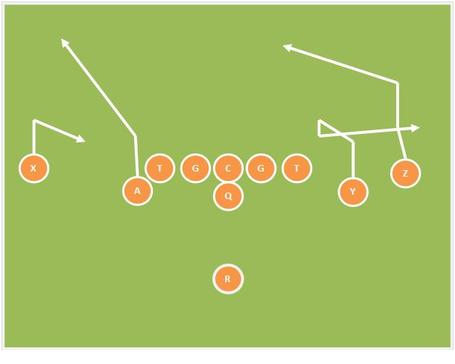 This sets up similarly as the Follow play we saw above, except Zach Rogers fakes the follow before cutting to the boundary. There likely aren't a whole lot of yards in it, and the play won't really stretch the defense unless Arnett can shed a tackle from the safeties coming up, but the underneath routes on both sides should be open. Again, Da'Rick is mostly used as a decoy in this formation, running the hitch side of the smash route with Rivera. (In reality, having both these routes in the same play is probably overkill; one of them should be open, not both.) There's also an easy option into double slants on the X-A side if the coverage dictates, although the timing between Da'Rick and Arnett would need to be careful. Again, I'm not an offensive coordinator.

This doesn't preclude the need for deep routes, mind you. It's not exactly a secret that Bray can throw one heck of a deep ball, but the key is to use it just enough that the safeties have to respect it. Against nearly every team we play from here on out, it shouldn't be an issue. (Against Alabama and LSU, it'll be a problem, but we're going to have a ton of problems against both those teams. This is probably one of the bigger issues, true, but I'm going to need something before I think we have an answer for it.)

It almost seems that our best option - at least in this game - is to use Da'Rick as a decoy and see who else can handle the medium routes. That does two things for us; it lets us know who can handle the #2 WR duties (and, to an extent, the #3 duties; I do think that we're going to need to put more WRs in the formation now, since our personnel advantage with having just Hunter and Da'Rick in has been somewhat negated) and it deeps any better usage of Da'Rick under wraps until Georgia. That's when the fun begins.