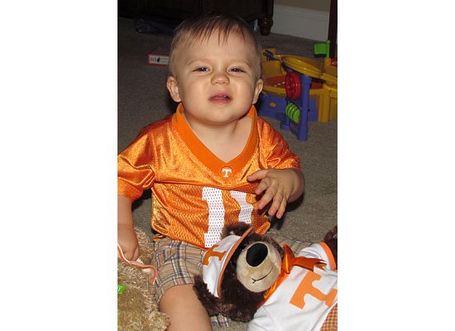 Jackson showing his game face and Build-A-Bear "Dooley."  He is a cold-blooded gunslinger with a ball in-hand

Ladies and gentlemen, I'm back after a one-week hiatus from everybody's favorite feature. Muchos gracias to childwhiskey for filling in for the Fat Kid last week and doing a bang-up job with the Locks & Keys.

Well, what did I miss in a week? [Actually, not much since I was around, only ridiculously busy ...] But you guys missed a lot. Oh yes. Yes you did. Why, you say? Well, you haven't been down in my living room floor with my 13-month-old son, Jackson, have you? Didn't think so. And, boy, let me tell you what you're missing:

In the past week, my child has emerged as easily the best quarterback in the house. The kid's a beast. Just a flat-out monster with the Spongebob ball in-hand. Not only does he stand a menacing height for a 1-year-old, he also packs a punch. Kid goes 32 inches and weighs 26 bills. When he gets pissed, the county knows. But when he flings a ball ... son. I'm telling you what -- I believe in Derek Dooley, and I don't think Tyler Bray will be the last superstar quarterback in Knoxville for the next 17 years, but remember the name, guys. Remember the name --

Named for Andrew, not Janzen. [Forget about the whole Trail of Tears and give me a break here...] They'll call him Hickory by the time he has grown into the monster he'll be. Mommy knows -- breakables, beware the laser-rocket arm on the toddler.

I'm sure the Vols will have to wrestle him from in-state powers Alabama and Auburn in 2028 -- and he'll take his visits -- but in the end, he'll be a Vol. He'll be about 6-foot-4, 235 and be able to sling it. Mother's height, Daddy's weight, Mother's movie star good looks, Daddy's brains and hand-eye coordination, not to mention love for the sport. Mother's athletic ability.

It's just a matter of time, folks. Remember the name. File it away -- Jackson Shepard -- and we'll get on with the L&Ks. Let's get it on! 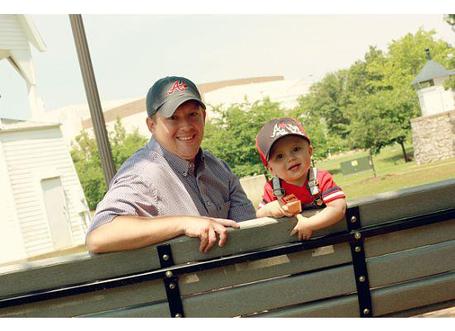 Jackson didn't cry about the Braves like his Da-Da did

FIVE KEYS FOR TENNESSEE [To have a successful showing, since I think we're definitely going to win regardless...]