Predestination we call the eternal decree of Prior Success and Booster Money, by which They have determined in Themselves, what would have to become of every team in the footballs. For they are not all created with a similar destiny; but Roses and Tostitos are foreordained for some, and eternal Meineke Care Car Bowls for others.

Don't bother me with your "taking some incorporeal thing that is apparently at some level and displacing said thing (which isn't even a 'thing' in a strict sense, really) to some other not-particularly-defined level" or your touchy-feely "team chemistry" or your "mental toughness from experience" or your "player names." I GOT CHARTS AND CRAP, BRAH.

Let me break it down for you: all that is solid melts into air, that 20 pounds you put on in the last 5 years is following you to the grave, everyone disappears no matter who loves them, Rosebud was just a frickin sled, and OK Computer is, was, and forever will be a crap album. And unless you have a flying quarterback with laser-eyes (which, realistically, is gonna run you at least $180k or so), players aren't really all that important. Unless you're looking at the telescope wrong-way round, the only reliable predictor of what's going to happen to some particular team is what has happened. (Pro Tip: STAY THE HELL OUT OF RUSSIA IN THE WINTER). And happened to who, you ask?

Football is beautiful not because it celebrates and protects the precious light flickering in every player's heart.

Football is beautiful because it relentlessly grinds every individual player into an expendable cog in ritualistic war machine beneath the Dr. Ecklebergian gaze of some maniac in a headset.

It's totally messed up. Embrace it, grasshopper.

So forget everything you know about the Vols. Don't even think about Montana. Quit trying to decide if "Tyler" or "Bray" is a better middle name for your firstborn and stop worrying about how to pronounce "Maggitt." You want to know what we're going to look like this season? TO THE RECORD BOOKS!

There's been a whole boatload of sack-cloth-rending about offensive balance this offseason (try and untangle that metaphor, bucko). And the argument basically comes down to this:

Well here's the deal, yall- we are going to throw the ball a lot. Chaney averaged a touch over 40 passing plays a game during his coaching career at Purdue ('97-'05). But before everyone flies into an Air-Raid induced panic, here's the rub: we're going to be running the ball a lot more, as well. Behold yon chart:

One big thing to note here is how many plays in general Purdue was running- their fewest average number of plays per game (76) would put them snugly at 12th between Houston and Arizona in last year's total plays-per-game averages. (And Dooley's average in his time at Louisiana Tech was 72, before somebody gets all nitpicky). The Vols last year? A molasses-uphill-in-Siberia 65 per game, which qualified us for yet another bottom-quartile award: a cool 96th in the FBS.  (And don't you even think to start arguing that this was some sort of planned underdog strategy- we also ranked 97th in average time of possession per game, thankyouverrrymuch.)

II. Balance is what you make of it. Or Something.

In Chaney's nine years as coordinator, Purdue averaged about 148 rushing yards a game, versus 273 yards passing. Take a gander:

If you're looking for a completely unscientific but wildly entertaining recent comparison team, these stats cumulatively match up almost perfectly with SMU last year, who averaged 140.1 and 275.8 yards rushing and passing, respectively. (Overall at Purdue, Chaney's offenses passed on roughly 54% of downs, a shade less than Jones' 57.8% last year). And if you've ever watched a June Jones team, you won't care how unscientific it is, and just grin like an idiot. There's no magic formula here- Georgia Tech does OK rushing eleventy billion times a season and we somehow managed to get to a bowl game ranked 114th in rushing yards per game at 94.5 YRDS/GM. But rest assured nobody in any crazypants system wants to be 114th in average rushing yardage, including Chaney.

Last year, Tennessee averaged an extremely anemic 25.1 points per game, coming in at 69th in the FBS. How did Chaney's offenses fare?

Chaney's total per-game scoring average while at Purdue was 30.01 points per game, 31.6 if you ignore the 6-6 '01 Brees-Orton interregnum (during which the punter appears to have been the best player on the team). Put in context, South Carolina averaged 30.4, Georgia 30.2, Alabama 33.4, and Auburn 41.4 (ASTERIX GOES HERE) last year.

There's a case to be made that all these stats are non-transferable, due to variances in strength of schedule, vagaries of player eligibility, and a bunch of other highfalutin claptrap. But the fact remains Chaney was remarkably consistent whilst a Boilermaker: 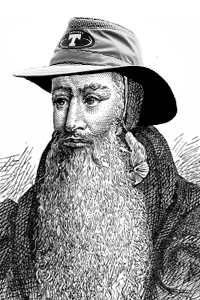 So then I propose, now, to enter into sacred battle with the anti-homer journalist (and I meanest thou, Wes Rucker) and the computer-modeled season; for though I confess that in some things they differ, yet, in hatching enormities of error, in adulterating our hopes with wicked and revelling audacity, in their proud contempt of the truth, in their forward impudence, and in their brazen loquacity, the most perfect likeness and sameness will be found to exist between them. But as we demand from coaches not the predictable, but the very least the reproduction of their sundry accomplishments at our own noble station, I have deemed it necessary to curb the sacrilegious madness of these men.

John "The Ville" Knox, The first blast of the trumpet against the monstruous regiment of women, and also Les Miles

THERE, FIXED THAT FOR YA.

URGENT ANTI-ACC ANNOUNCEMENT: Are you a Vol fan in NOLA? Drop us a line! Do you like Beer, Football, Beer, Whiskey, and the eventual violent seizure of an FSU homer bar from all the stupid Seminole fans! What more could you ask for from a social function? Facebook this crap and join us today!