In Which Jim Chaney Gets Happy About Pass Coverage

Share All sharing options for: In Which Jim Chaney Gets Happy About Pass Coverage

So I was all prepared to put something together on just some general coverage basics, maybe a little bit of Cover 1 / Cover 2 action, and then the podcast happened. First off, Matt Opper was one heck of a guest to have on, but secondly spent some time dropping secondary knowledge all over the podcast, which made me just a tad bit excited - if you haven't listened to it yet, go back and listen to it. (Bonus: read the comments as I progressively take over asking questions - thanks again, Will.) There's a lot of good info in there for one, and for another, he basically wrote half my stuff for me this week. Thanks, Matt!

Normally when we talk secondary coverage (and we will, at great length, whether you want us to or not), it's limited to general situations - middle of the field open (MOFO / 2-high), middle of the field closed (MOFC / 1-high), and so on - but I don't think we've really covered some of the more expansive zones. Cover 1 and Cover 2 have more secure deep variants known as Cover 3 and Cover 4 (which is also known as quarters coverage). Cover 3 is one of the more flexible coverage options out there, as not only are there a bunch of different ways to package it, there are a bunch of different ways to disguise it too. 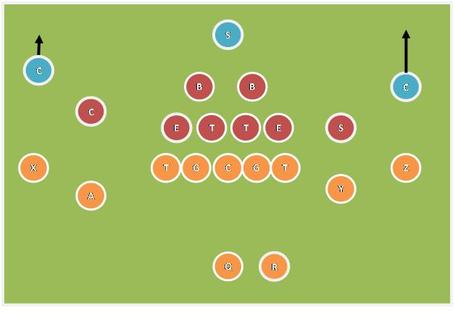 So this could basically be anything pre-snap; there's one safety between the tackles, which generally means either Cover 1 or Cover 3. In this case, it'll mean Cover 3. This is a relatively basic Cover 3 type - I call this the base, although it can go by a bunch of names like Invert or Sky. The two cornerbacks playing closest to the boundaries will bail deep, leaving that third cornerback, the safety, and (likely) the two linebackers to cover the underneath zones. (That is, it's Cover 3 because the three guys in blue form the deep zone.) It's a good base defense; the strong safety can easily come up to support the run, and there are two linebackers there as well.  Incidentally, Nick Saban loves him some Cover 3 (he loves him some Cover 1 more, but it's difficult to consistently play Cover 1 at the college level; Cover 3 is a safety defense, albeit not quite as flexible.) That's not the only way Cover 3 can work, though. 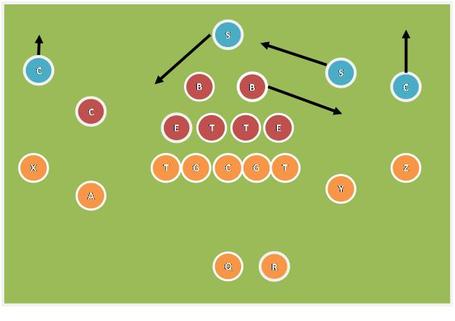 There are a lot of arrows here, but this is a hopefully-reasonable approximation of Cloud coverage. It's a subset of Cover 3 (normally the strong safety isn't going to be lined up over a WR; only Eric Berry could do that at the college level and still get deep, and you can count the number of guys who can do that in the NFL on one hand) where the strong safety rotates to cover the free safety's original zone, the strong safety comes down to support the other play side, and ..well, magic happens. I must confess, of the three primary Cover 3 options this is the one I understand the least (and really, this doesn't make a whole lot of sense as a base coverage for a few reasons, not the least of which being the position of the safeties kind of make it a dead giveaway pre-snap).

We're not done yet, though; here's one more highly-used variant on Cover 3. 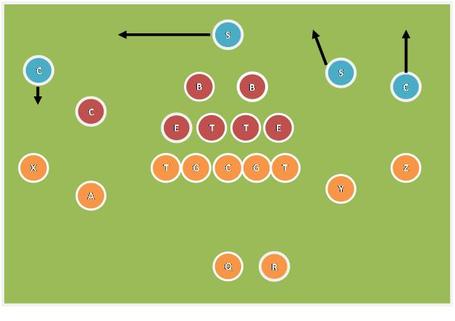 This is quarter-quarter-half (QQH) coverage. This is also one of the most clever names for a coverage I've seen, because two guys (the corner and strong safety) each get a quarter of the field, leaving the free safety to cover half the field. It's imaginative, right? Just wait - quarters is even more imaginative. 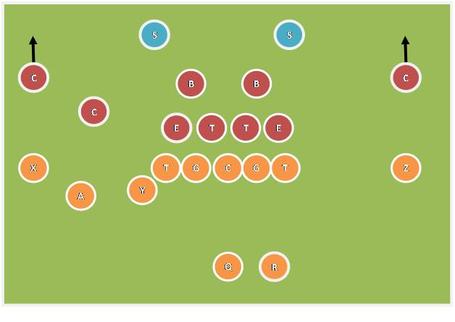 Okay, that sounds cool. But what do you do about it?

You can't just attack all four coverages the same way, can you? Well, you kind of can, especially with Cover 3. I could put together a bunch of diagrams showing how to attack, but it's almost easier to lay it out, bullet-point style:

So yeah, we have options. How do we use them?

Do you like bullet points? I like bullet points. (Seriously, this post could've been about 15,000 diagrams and 45,000 words. I'm probably expanding on most of this later; this post was pretty much off the top of my head, which scares me as much as it scares you. If y'all want follow-ups, let me know.)