Exhale. The Vols looked dominant at times and looked ready to fall apart at times, but a huge day from Jarnell Stokes helped Tennessee hold off a late rally from red hot Jeremy Lamb and the Connecticut Huskies 60-57 at Thompson-Boling Arena.

In front of a rabid crowd that drew awe from the CBS announcers and the UConn play by play announcer, on We Back Pat day in Knoxville, and against one of the Lady Vols' biggest rivals and the defending men's national champions, Stokes simply took over, with 16 points, 13 rebounds, and 2 blocks. He out-dueled the projected #1 pick in the 2012 NBA draft in UConn's Andre Drummond, who had just 6 points and 8 rebounds.

The first half was a bruising battle, with both teams led by two big bodies in their starting frontcourt, but the referees let them play, and the two teams combined for just seven first half free throws. Trae Golden and Jeronne Maymon combined to go just 0 of 7 in the first half, but Tennessee was led by eight points from Cameron Tatum and six from Stokes to stay within two, as an impressive driving layup from Jeremy Lamb in the final seconds put UConn up 27-25 at the half.

But in the second half, Tennessee came out firing. Tatum made another three, Stokes hit a layup, and Jeronne Maymon made his first two buckets of the game, and a 9-0 Volunteer run was good for a 34-27 lead with 16:27 to play.

And then Tennessee stopped scoring. McBee missed an open look. Tatum airballed an open three of his own. Kenny Hall missed a slam dunk. Tennessee would go more than six minutes of game time (twenty minutes real time) without a point until a Stokes free throw at 10:19 gave them 35-33 lead. That's right, a lead. That is CuonzoBall. Where Tennessee can go more than six minutes without a point but still lead at the end, allowing their opponents just six points in that stretch. After the game, Martin said "This is the way Tennessee will defend as long as I'm a part of this program." And he'll get no complaints from us.

But, while CuonzoBall's defensive merits have been obvious since the start of SEC play, Tennessee's offense needed a little Stoking. From 10:19 to 7:10, Jarnell Stokes had six of the Vols' eight points (the other two coming on a Kenny Hall slam off a missed Stokes free throw), delivering energy to an offense suffering a period of stagnation. A Skylar McBee three followed, and Tennessee looked well on their way with an eight point lead and seven minutes to play.

But missed Tennessee free throws--and Jeremy Lamb--would bring the Huskies back. Tennessee started just 2 of 10 from the line, with 2 of 7 Stokes the major culprit. And Lamb, who would finish with 23 points on 17 shots, wouldn't go away. After Alex Oreaki Oriaki Oar Eee Aah Key Oriakhi, UConn's other strong inside presence, fouled out, Tennessee ran their lead to 10, and it looked as though UConn was done.

But then Lamb made two free throws. And then Lamb made a layup. And the lead was at six with a minute to play, and the game was again in doubt. All Tennessee had to do was miss free throws and the game would be UConn's for the taking. But the Vols, who, I repeat, started 2 of 10 from the line, made 6 of their next 7. Stokes hit two, Golden hit one, and after two ridiculous, off balance three point shots from Lamb and Shabazz Napier cut the lead to two, Skylar McBee made a clutch pair, giving the Vols a 58-54 lead with 19 seconds left.

UConn would hit another three, and Tennessee would miss two more free throws (one each from Tatum and Hall), giving the Huskies a chance to tie at the buzzer, but a halfcourt shot hit the backboard and bounded harmlessly away from the rim, and the Vols won for the seventh time in their last nine attempts against defending national champions, moving to 9-10 on the season.

Stokes 16 points led the team, with Tatum's 15 (on 4 of 7 from beyond the arc) providing strong support. No other Vol reached double figures, but Maymon and McBee each netted a key eight. Stokes also led the way on the glass with 13, with Maymon adding eight and Hall six. Golden, despite just two points on 0 of 4 from the floor and just 2 of 5 from the line, had 6 assists to just 2 turnovers. On defense, the Vols held UConn to just 36.4% from the field (with only Lamb shooting better than 40%), while Tennessee shot 41.5%.

This is a Lady Vols thing here at Rocky Top Talk, but on We Back Pat day, it's only appropriate. Breadsticks of the game go to Jarnell Stokes. After the game, Tim Brando called him "one of the most impressive freshman I've ever seen" (never mind that he should be a senior in high school). And that's enough to make our own sweet mother of breadsticks proud. 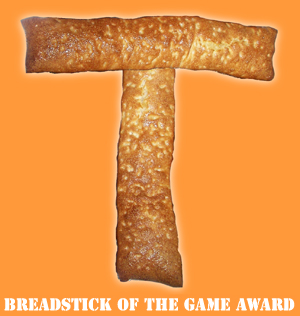 Tennessee is back in action Tuesday night in Demon Memorial Gym against Vanderbilt. Join us here. And don't talk about the NCAA Tournament.