Share All sharing options for: Several Vols in Action at Knoxville Challenger

(1) This event is called the Knoxville Challenger. What exactly is a Challenger tournament?

In professional tennis, you've basically got your major leagues, which are ATP tournaments, and then you've got two levels of minor leagues. The lowest level of these two levels is the Futures Circuit, which is generally comprised of tournaments with players ranked in the 300s and above. The higher level is the Challenger Circuit. Challenger tournaments will generally have a few guys in the top 100, and then the rest will be guys ranked in the 100s and 200s. As you might expect, Challenger tournaments provide more ranking points and prize money than Futures tournaments, but not near as much of either as ATP tournaments. All three of the former Vols have won several Futures tournaments each.

(2) Do any of the Vols have a chance at winning this tournament?

JP Smith, who is currently ranked 247 in the world, is the only one of the three who has won a Challenger tournament -- and his ranking jumped up to 210 after he did it -- but all of them have the ability to do so. JP played last week in the Charlottesville Challenger and made it to the quarterfinals.

Rhyne Williams is currently ranked 240 in the world. He has yet to win a Challenger, but is the only one of the former three Vols to make it into one of the four prestigious major tournaments. Rhyne was also in action at the Charlottesville Challenger last week. He made it to the quarterfinals as well, but not before avenging his 2011 NCAA finals loss to Steve Johnson in what was a rather heated match.

The 253rd-ranked Williams missed a serve and started bickering with the chair umpire. At that point, Johnson, the former USC star, told Williams that his serve was several inches out. As Williams continued his argument, Johnson said to him: "All day, all day — that’s all you do is run your mouth." The verbal exchange was the peak of sniping and gamesmanship that had gone on for the better part of the match.

Tennys Sandgren, who has the coolest name in all of professional tennis, is also in search of his first Challenger win. Sandgren is ranked 256 in the world and was also in action at last week's Charlottesville Challenger. He had a really rough draw, and lost in the first round to the same guy that ended up beating Williams in the quarterfinal round.

The first round matches begin on Tuesday.

(4) Has the main draw been finalized?

Yes sir it has. 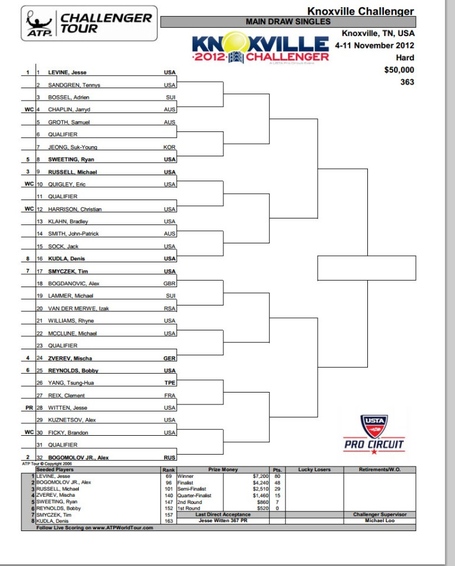 (5) Where can I get further info about, say, the scheduled times for each match?

(6) Hold on dude, you're telling me that in 2011 we had three guys on our tennis team who are now three of the best 250 tennis players IN THE WORLD...and yet we didn't win the NCAA Team Championship?

You're preaching to the choir. I have no idea how that team lost to UGA in the NCAAs. UGA wasn't even any good. We had just beaten them like two weeks before to secure the SEC championship, and we had three guys -- yes: not one, or two, but three -- who were better than anybody on UGA's team.

I have no idea how that loss happened. Had we won that match, it wasn't necessarily a given that we were going to win the whole thing. We would have met USC again the finals, and they were excellent in their own right, and so that match could have gone either way. But at the very least, we were the second best team that year, and it still annoys me that we lost to UGA. Argh.