Airing it Out: A Primer on the Passing Game

Share All sharing options for: Airing it Out: A Primer on the Passing Game

No, it's not time to have a long discussion about the vagaries of the run game. That's boring. All that blocking and driving and three yards and a cloud of dust (you want five yards and a cloud of dust? Did you see Tennessee's run blocking last year?) and hey look it's another punt. That's boring. Brain-suckingly boring. You want to watch the run game, go watch Florida.

We're not about that here. We're not talking about how excited we are that Marlin Lane and James Stone and Zach Fulton are returning, are we? (Put your hand down, Brad.) So let's talk about the pass game. There's more fun in talking about Tyler Bray (who will actually hit the targets he's aiming at once the game starts) and Justin Hunter and Da'Rick Rogers and Mychal Rivera and Cordarrelle Patterson, and hey, look at that, I already wrote all about how the passing game is awesome in the Rocky Top Talk preseason annual. I shall exercise my ability to quote liberally from myself below the jump (and you know you want to jump).

Note: the images below are cropped oddly, because I'm not an editing master. They look much better in the magazine.

Different teams stress defenses in different ways. Think of the goal-line "let’s just put 9 OL, a QB, and the guy getting the ball on the field and see how it goes" jumbo package, for instance. For Jim Chaney, formational stresses come from putting guys in space, whether they’re wide receivers or tight ends. Although Chaney won’t entirely leave the heady days of the iso and power formations, expecting Chaney to adhere solely to those formations is also…well, let’s go with "naïve." Sorry. Still, it’s more fun when there are more receivers on the field, like the sets in this section.

The neat part about this set, apart from the fact that it forces more defensive backs on the field out of position on run plays, is that Tennessee has the personnel to use this set this year. With Justin Hunter, Da’Rick Rogers (we hope), and Cordarrelle Patterson all in the fold, all that’s needed is one of the myriad crop of backup WRs to step up and there are four legitimate on-field threats. See below for an example of this. (As a side note, all the defenses I’m putting in here will use four down linemen; the defensive looks will change slightly with three down linemen.) 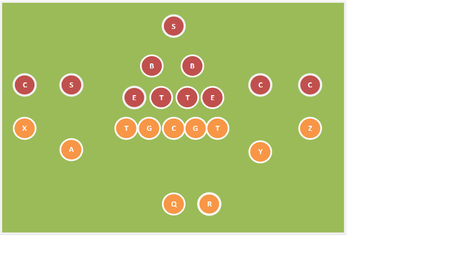 On the defensive side, the strong safety (and nickel corner) is forced into pass coverage, which may not be the strong safety’s forte. Furthermore, depending on how the WRs align, the box may be effectively vacated, resulting in a potential 5v5 situation (provided the defense is in some kind of two-high shell, leaving either four lineman and a LB or three linemen and two LB to cover the OL). In Figure 1, there are six guys in the box, which makes passing viable.

It’s the quarterback’s responsibility to recognize how the defense has responded to this pressure and adjust accordingly. The key point is what happens with the safeties. While it’s theoretically possible for teams to sell out and play seven on the line of scrimmage, it’s also rather unlikely they will choose to do so. The key point is whether the linebackers line up favoring coverage (i.e., not in the box). If that’s the case, a run audible makes sense (or, alternatively, the run option on a play, which is a little wrinkle we’ll get into later), because that should be an opportunity for even last year’s run game to get a few yards.

We saw a lot of this formation last year (no, thank you Mychal Rivera), and there’s no reason we won’t see it again this year. Unlike the raw receiving power of the 4-WR formation, the key here is in formation flexibility, and it’s mostly thanks to the tight end, who can line up as a receiver (making the formation look a lot like the 4-WR formation), put his hand down on the line (resulting in an extra blocker), or even line up in the backfield like a fullback. See below; the inverted colors in this graphic are illustrations of different lineup options for the tight end. 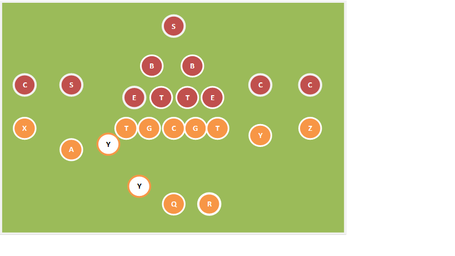 Meanwhile, the defense is presented with an interesting question: How do you deal with the tight end? If he’s lined up as a receiver, he’ll probably draw strong safety coverage who will likely give up a few inches and a few pounds. If he gets a linebacker, most LBs aren’t used to dealing with stand-up pass coverage lining up over someone. It’s a bit more straightforward if he lines up in the backfield or on the line, since both of those would always be the LB’s responsibility. Still, if he lines up on the side with 2 WRs, then there’s now a formation imbalance with which the defense must contend.

The quarterback’s key responsibility is simple: Identify the coverage options on the TE. There may be a little bit of motion – most of Chaney’s playbook doesn’t use motion, but that doesn’t mean it can’t – involving the TE moving between split-out and on the line, but other than that there isn’t too much pre-snap for the QB.

We didn’t see much in the way of this formation last year (note that this is different from formations involving a FB, which we did see some of), but there’s a lot of versatility here, as seen below. Basically, the offense sacrifices some blocking for unpredictability. There are other things that can be done, mostly involving removal of a TE (split-out only, otherwise it wouldn’t totally count as a spread). However, the key – and also the reason we didn’t see much of this last year – is that you need a credible run game to pull it off. That’s a luxury Tennessee couldn’t afford. 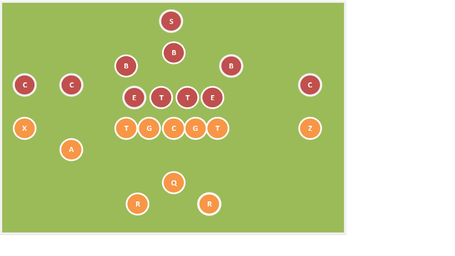 From the perspective of the defense, there are five threats on the field, and it’s not totally clear who’s getting the ball, or even whether it’s a run or pass. Screens are a legitimate danger as well. The trick here is forcing defensive hesitation. If they’re thinking when the ball is snapped, then the offense has already won. The quarterback then has an odd task, but it’s not a daunting one: Further confuse the defense. Motion makes a lot of sense here, but we haven’t seen a lot of that. Now, fake audibles? Let’s do it.

Formations are only half the battle, though. Once you get the guys on the field in the right spots, you need to have ideas to get them in positions to get the ball. Those ideas aren't here, though - they're in the magazine. Be a good person and pick that magazine up. Don't worry, we won't tell anyone if you only read about the passing game.