Share All sharing options for: Tennessee's New 3-4 Defense: About Techniques and Gaps

So, right. We have this new defensive coordinator, Sal Sunseri - maybe you've heard of him, came from Alabama, studied under Nick Saban and Kirby Smart, is used to 24.5-hour work days, the usual. While Sunseri was reluctant to discuss what the details of the new defense would be (hint: it's a 3-4), he likes the idea of using a nose tackle (like a 3-4) and spent some time trying to figure out what the best position of Tennessee's returning guys were (in a 3-4).

With that being said, we should probably learn about Sunseri's defense (which is a 3-4). Below the jump is an extended excerpt I wrote for the Rocky Top Tennessee Magazine on the 3-4, which covers both position assignments, responsibilities, and the broad run and pass defense concepts we'll see on the field. This piece just covers the positional assignments, though - the principles are in the mag.

(Note: this piece will talk a lot about gaps, techniques and gap control. In short, gaps are potential holes in the line for defenders to either exploit or stop - holes between offensive linemen, in essence. Techniques are a complex way of describing where defenders line up compared to the offensive linemen. Gap control is controlling those spaces between OL. This section talks a lot about techniques and gaps; the next section talks about gaps and gap control. 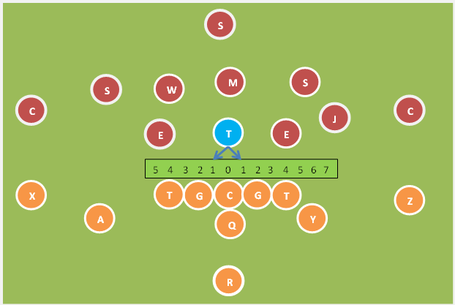 - Defensive Tackles become Nose Tackle. Yeah, that looks like an odd sentence construct, but it's true. Typically the DTs line up as either 2-tech or 3-tech (that is, either over the guard or between the guard and OT); they'd mostly be tasked with interior pursuit and sealing the inside gaps on run plays. They can - and probably should - work as a tandem most of the time. Still, double-teaming both DTs shouldn't happen if you're on offense, which means a DT needs to be able to win 1-on-1 battles when they come up. With DTs, it's about gap pursuit - find the holes between the OL and get in there.

Now, a NT is a straight-up 0-tech type of guy - sit over the center and take up space. It's the NT's job to force double-teams, making his job less gap pursuit (beating blocks) and more gap control (acting like a blob, as shown by the arrows above). It sounds simple, but the NT also needs to be good enough with his technique to continue to force double-teams regardless of the play. If the NT is doing his job, that should free up the linebackers to either pursue through a potentially open gap (left open as a result of the NT absorbing a bunch of beef) or through pursuit of other gaps (since they don't have to worry about the gaps the NT is occupying).

As it turns out, the NT's role doesn't change much in pass rush situations; get those double-teams and let the linebackers handle gap pursuit. 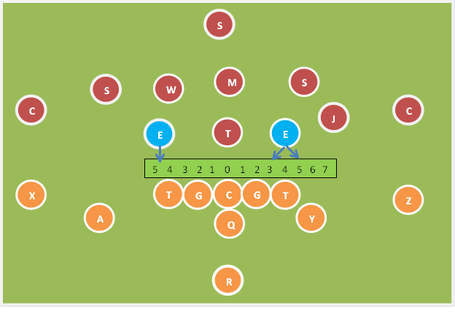 - Defensive Ends become Defensive Ends. Okay, so not every position has some huge change. In a 3-4, the defensive end's responsibilities lay out like this: line up at the 5-tech (on the outside eye of the tackle, like the guy on the left) or possibly wider, seal perimeter gaps, pursue tackles. Speed is paramount; the DEs are the playmakers on the line. If they command double-teams, that's great, but it's not necessary to the success of the rest of the team if they don't command double-teams. Typically, DEs won't pinch in (get in too far and now you're in the DT's territory).

In a 3-4, DEs are less a wrecking, tackling force and more a tactical wrecking force. Because the NT is always lined up near the center, DEs have more freedom to line up anywhere between a 4-tech (over the tackle) all the way to a 7-tech (outside the tight end's shoulder, if the tight end is on that side). It's a lot easier to create overloads - 2 defenders on 1 blocker - based on how the DEs line up. For that matter, the general aims of the DE will depend in part upon where he lines up.

If a DE lines up as a 4-tech (like the guy on the right), that effectively forces the offense to worry about 2 gaps in the line, signified by the arrows - the gaps to either side of the tackle. That opens up space for a potential overload blitz with one of the linebackers through one of those controlled gaps. If the DE is a 5-tech, well, that looks like a typical 4-3 DE, so the typical things apply.

Now, once a DE gets far out to the 6-tech or 7-tech positions, the goals change quite a bit. At this point, the DE is basically locked into an exterior sealing and pursuit role; it's a risk-reward play, since the interior (which will typically be covered by a couple linebackers) is now fairly open. There's a chance the Jack LB (which we'll discuss in a second) could line up further outside the DE, but that's not really where the Jack would line up. It's more likely he'd line up on the other side, where the DE is probably closer to the NT.

There's no reason why the DEs would line up in the same position on either side of the NT, either, which allows for a bit more flexibility. Again, since one of the themes of the 3-4 is positional flexibility, that usefulness is not underestimated. 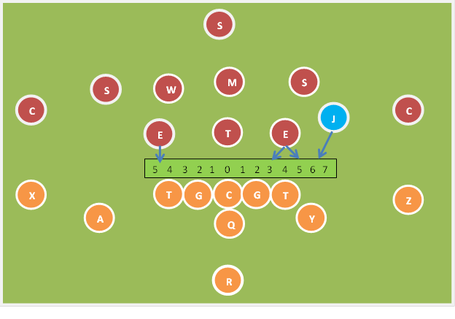 - The Jack Linebacker. This really isn't a position in a 4-3; it's best described as a hybrid LB/DE in 4-3 parlance. Anyway, the best way to describe the Jack is a hybrid rusher who spends most of his time pre-snap either on the line of scrimmage or close to it. Depending on the particular play, he can put his hand down, but will normally be a stand-up rusher. In most cases, he'll be the first potentially free rusher in run plays, depending on alignment - he'll typically line up outside the DE on his side (like above), so he may be able to beat the tackle on that side of the formation. 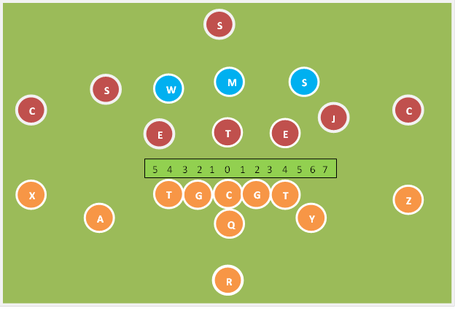 - The 4-3 Linebackers to Will / Mike / Sam. In other words, that's Weak, Middle, and Strong, in order. The Will and Sam linebackers are defined based on the offense's strength. Their responsibilities don't change much between 4-3 and 3-4; they're responsible for the underneath zones in pass coverage and are first on deck for run support if the line (and Jack) can't get the rusher.

Defending the underneath zones is a point of emphasis in a 3-4; it'll fall on the linebackers to take care of that part of the field. Furthermore, the Mike position also serves as the mental heart of the defense, which includes recognizing what the offense is doing and adjusting calls accordingly to match. Intelligence, film study, and quick decisions are every bit as important as strength. 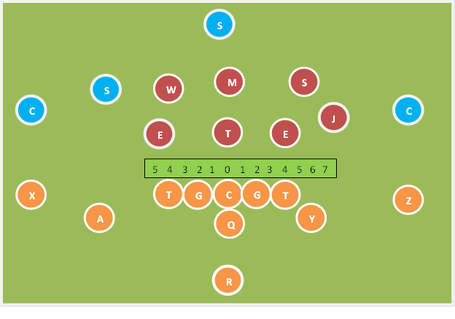 - The secondary is the secondary. There aren't many changes to the secondary's roles based on the scheme. The underneath zones look a bit different in a 3-4 than they do in a 4-3, but that's about it. Other than that, though, most of the secondary changes come from a change in philosophy, not in scheme.

Now that we have a bit of understanding about what the different position responsibilities are, we can move on to what the defense is supposed to do.

[Ed. -- The remainder of this article can be found in Rocky Top Tennessee 2012. Details below.]