Florida's Offense and the Byproduct of a Half-Installed Offense

Share All sharing options for: Florida's Offense and the Byproduct of a Half-Installed Offense

So I'd love to sit here and tell you how Florida's offense works, but quite frankly, I'm not sure if Florida knows how their offense works. It's staggering to watch; at this point, I've seen both those games and I'd roughly categorize their offense as "ineffective QB runs around and completes a bunch of short passes, offensive line messes around for a bit except for one drive when they all block downhill, running game does just enough except for one drive where they dominate", which isn't exactly conducive to figuring out how the defense can attack. Rather, it's less attack and more not screwing up.

Still, I can't help but think this isn't what Florida OC Brent Pease and HC Will Muschamp want. Pease comes from the Boise State offense, which isn't really an offense in the strictest sense of the word as much as it is a conglomeration of loose ideas and counterpunches. Muschamp, on the other hand, likes to run. So there's some symbiotic relationship there, but the question of how is still being worked out. Regardless, let's take a shot at figuring it out.

So you know how I just said Boise's offense isn't really how we think of an offense? Ostensibly, it's something I hate - they don't have a philosophy, but they do have plays. Still, that's a bit ingenious of them to say; rather, they have a philosophy, but it's not how we think of a philosophy. Instead of being based around spread-to-run or spread-option or spread-to-pass or one-back or West Coast offense, Boise State's offense is simply about two things: space, and taking advantage of that space.

That is simple enough to teach and install, at least instinctually. You can get space by one of two ways: adjusting how your routes are run, and doing things like adding gaps for defenders to address. For example: 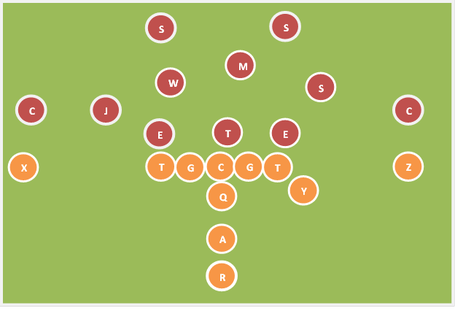 So this is a pretty standard I-formation against a 3-4; there's an additional gap the defense has to account for thanks to the tight-end (by gap nomenclature, let's call it the C gap). But, they can also use pre-snap motion to do this: 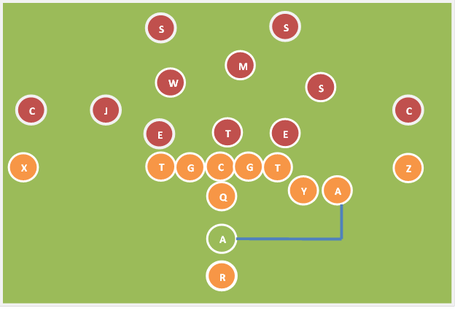 So, now we have a bit of a dilemma on the defensive side of the ball. There's now a brand-new D gap to account for right before the snap, so as the defense I have three options: give them they gap (which is a terrible idea), show the adjustment (which is better than giving them the gap, but a good QB can take advantage of it), or communicate the adjustment without showing it (which is harder than it looks, especially in game 3 of a new defense). Now, if the UF offense was better installed (and Jeff Driskel had more experience), the only good option to the defense is the third option. As it is, they might be able to get away with showing adjustments sometimes. (In this case, the adjustment is probably some kind of LB rotation or safety rotation.)

Obviously, you can do the same thing with classically passing formations as well: 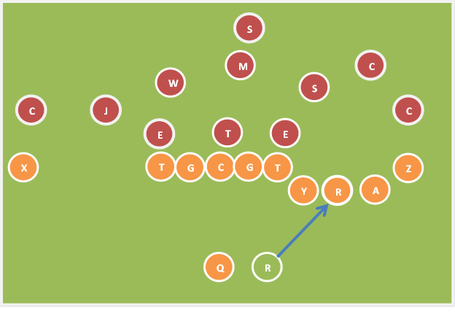 That's a massive personnel imbalance; fortunately, Driskel hasn't yet shown he can get rid of the ball fast enough to deal with empty coverage, so in that sense it'll work out in Tennessee's favor this year. (Also, note that can go two ways - motion out to show a 4x1 look, or open in 4x1 to see the defense's empty set adjustment, then motion back to a "safer" 3x1 set.)

As far as the specific plays Florida will run? Don't expect anything complex. That's not where they're at yet; heck, I'm not even sure they've installed packaged plays yet , which are yet another way to take advantage of space (except after the snap). If they had installed those, I think we would've seen them last week - and for all we know, they may have, but Driskel wasn't getting the ball out fast enough.

Driskel's penchant to hang on to the ball might be Tennessee's saving grace this year. Between that and Sal Sunseri's penchant for trying to force the issue, this may be a game where Tennessee can define the action on both sides of the ball. Sunseri likes to bring pressure from all directions in all kinds of different ways, so fire zones and gap overload-type blitzes (where multiple rushers come through the same gap on the offensive line) are good ways to challenge how the blocking schemes have been installed, and they'll end up forcing Driskel into uncomfortable positions on more than a few occasions.

Really, I can't overstate enough the effect of having a young QB working with a young system on the road going against an aggressive, gambling defense. Florida's penchant for running has as much to do with Driskel's inability to pass in a timely manner as much as it does Muschamp's desire to run; the latter is an idea, the former is a flaw. If that flaw can be punished appropriately, the game is in Tennessee's hands.

One thing to be careful with: make sure that Driskel doesn't break protection by going directly up the field. In that sense, I liked what Texas A&M did last week, forcing him laterally before he was able to scramble. I'd much rather have Driskel run around for 6 seconds for a 2 yard gain than run around for 4 seconds for 8 yards. I'd take that every time.

Heck, that's half the problem with stopping the run game, anyway - gap control is critical. Florida was able to knock Texas A&M off the ball enough to be effective; I think Florida's using too many different runners right now, but when Mike Gillislee gets the ball, he's effective (5.9 ypc last week) and he's back for this game. Gap control will hopefully limit his effectiveness, and is the key to the run game. Control gaps, and that'll force Florida into passing downs, which is not their comfort zone.

That's it, really. I'd love to tell you there's a complex, multi-part plan associated with stopping this Florida offense, but the combination of a new QB and a new offense means Sunseri's job is deceptively simple for this week. Sounds good to me.