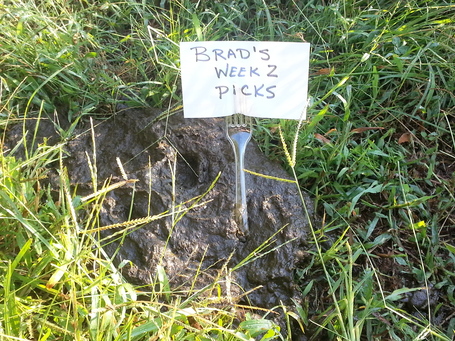 This Calf Must Have Gone To El Mariachi

All through the first 2 1/2 quarters of Saturday night's heartbreaking meltdown against Florida, I was thinking in my head that we'd all get the opportunity to hear Bob Kesling botch his chance to call a monumental victory for the Tennessee Vols.

In my head, snapshots of fans hanging from the goal posts and the soundtrack of John Ward chanting, "Pandemonium Reigns!" after we beat Florida in 1998 was playing over and over. I let myself dream that Kesling would get the opportunity, even if it meant that he'd say something terrible like, "Taylor Bray and the Vols get a check mate between the Cheggarboards!!"

Alas, they played like poop in the second half, and it didn't happen. I'd have taken Kesling saying something dumb just to have the opportunity for him to say it.

Oh by the way, speaking of poop, as you guys who follow the column know, I went 2-4 two weeks ago. I was so disenfranchised with my performance that I decided I'd go out into the pasture and take a picture of a cow pile with a sign in the middle that said, "Brad's Week 2 Picks." This seemed like a good -- and funny -- idea at the time. But I had to work late last Thursday, so, Friday morning, I'm traipsing out through the dewy pasture that only had two calves in it.

I don't know if you live around cows -- [I live in Alabama, so I'm always around cows, even in Wal-Mart] -- but the little ones don't provide nearly the impressive piles as the big guys. So, I'm out there wading through the pasture, blue jeans soaked, trying to find any cow pile big enough to snap a picture of. Finally, I find a not-so-fresh patty that has coagulated a bit. So, I stick my homemade sign in and do my best Walter Iooss impression, snapping shots from every angle, with nobody but the cows watching. It was not a highlight of my life. Then, I had to go in and change clothes and was late to work. All for RTT. All for a poor attempt at humor.

Then, I talk to Joel, who wants me to wait and use the picture another week. Instead of driving to Johnson City to strangle him while yelling, "YOU DON'T KNOW WHAT I'VE JUST GONE THROUGH!!!! ALL FOR POOP! ALL FOR NOTHING!!" So, even though I went 3-3 last week and am the picture of mediocrity, above is my masterpoop.

FIRST, A QUICK LOOK BACK

KIDB's "I think he might actually be TRYING to lose" PICKS