Share All sharing options for: RTT's Locks & Keys Week 2: A Pirate's Life For Me 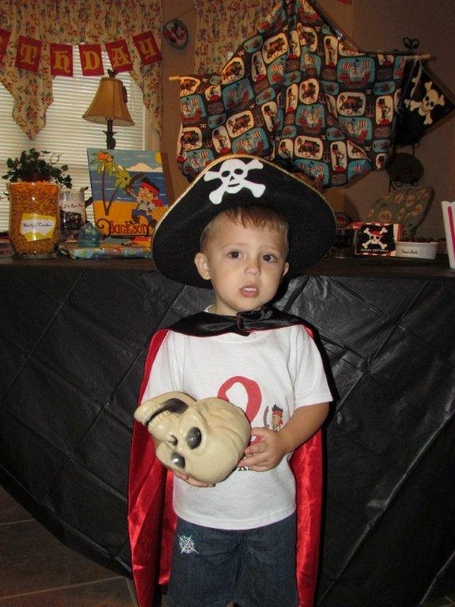 Last Friday's 35-21 Tennessee season-opening victory came and went without me in the Georgia Dome stands. It was the biggest game thus far of the Derek Dooley era, and I had to spend it away from the live action with my lovely wife and 2-year-old son walking back-and-forth, back-and-forth in front of the television.

But back to the point: I wasn't there. And as far as season-openers go for the Vols, I may not be in attendance for the foreseeable future. You see, my little boy Jackson's birthday is Sept. 1 -- traditionally the first college football week of the season. That means that the first weekend [most of the time] will mean a birthday party. That I, of course, cannot miss.

Hopefully, sooner rather than later, he'll want to do Birthday Weekend with 100,000 screaming fans in Knoxville. Until then, he comes first and the Vols come second. But don't worry, I still made sure that my sanctum was disturbed as little as possible during the game. Well, as much as running back and forth with pirate-themed party favors is not disturbing.

Speaking of dilemmas, I couldn't exactly yell, "MOVE!" because I was getting a Get Out of Decorating Free card. But I also couldn't always see [or hear] the game, either. Sigh.

[Full disclosure: I'm joking about the bothersome night. I enjoyed being with them, and the party turned out great with Jackson having one of the most fun days of his life. In other words, I wouldn't have wanted to miss it for a football game. Even one as good as Friday's.]

Anyway, the introduction to Locks & Keys is supposed to be fun -- and kinda funny -- so I had to add my own little snark. Now, onto the L&K!

FIRST, A QUICK LOOK BACK

[Note: No offense to Georgia State, but Tennessee cannot lose this game. It's not humanly possible. I'm pretty sure that we could get a team of 11 RTT readers together and put up a couple of touchdowns against the Panthers secondary. So, we're going to amend this week's five keys to "Five Things UT Needs To Do This Week." Now, if we lose, I'm probably giving up my fanhood.]