I think we can get in the end zone against the bye, you guys.

We're skipping the keys this week, because the only key is to recovery across the board. Nothing else matters right now.

Except for making fun of everyone else, because hoo boy did everyone else in here throw up some terrible picks last week. Well, almost everyone.

UCF (-16.5) @ Temple - George O'Leary in New Orleans is a dangerous proposition, but it sure ain't Temple that's going to do anything to stop them.

Oregon State (+14) @ Arizona State - the night is dark and full of terrors, and Oregon State -- with their panoply of two yard passes, and nothing else -- is going to make someone life's hell before the season is out.

Houston (+15.5) @ Louisville - Into the mouth of Teddy Bridgewater I attack, and I fear nothing.

Oklahoma State-3 over TEXAS: So, Texas wins a few games and I'm all of a sudden supposed to stop picking against Mack Brown? Nah, dog.

West Virginia-6.5 over KANSAS: This line confuses me. Has Kansas been competitive in any conference game this year? Have they shown anything loosely resembling competence in any aspect of playing the sport of football? Has Charlie Weis ever inspired confidence in anybody other than Athletic Directors? Those questions are rhetorical. Dana Holgorsen and his sweet sweet hair laugh at this line. 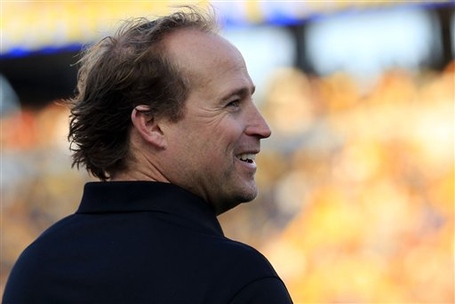 Central Florida-16.5 over TEMPLE: Temple is certifiably atrocious at the game of football and UCF is only favored here by 16? Do what? Temple lost to Idaho. Let that marinate for a second. Idaho. I LOVE this game.

AUBURN-3 over Georgia: Tennessee played both these teams. We almost beat one of them. We got absolutely obliterated by the other one, who is playing at home this week. I shall rely upon this as helpful evidence. Also, Guz Malzahn is to Mark Richt as Rafael Nadal is to Milos Raonic. One is really good at what they do, the other is arguably good, but also arguably mediocre. And only one of the two has a Butt Cut, which has nothing to do with either Nadal or Raonic, but everything to do with smart decision-making, or a lack thereof.

UCLA-2.5 over Washington: This line indicates that Washington would be favored over UCLA on a neutral field. Which is of course ridiculous as UCLA is objectively better at the game of football than Washington. But more than anything, I just wanted to take this Friday night game so I can get out to early lead against Chris and I_S. And then send them taunting text messages.

OREGON-26.5 over Utah: I see Oregon resuming it's usual Modus Operandi of beating the absolute funk out of every team in the Pac-12 not named Stanford.