Former Vol standout Rhyne Williams took out nemesis -- and fellow American tennis hopeful -- Steve Johnson in two sets in the first round of this week's 500-level ATP event in Memphis.

"It's kind of a little rivalry I guess [between Steve Johnson and myself]. We're friends off the court, but enemies on the court."

Rhyne Williams got the better of Steve Johnson -- and his first victory in an ATP-level event -- in first round action yesterday at the 500 level tournament taking place this week at the Racquet Club of Memphis. Williams won 7-6, 6-4 in a match that lasted an hour and a half and featured some impressive serving from Williams. The current world No. 159 held all 11 of his service games and won an impressive 34 of 38 first-serve points.

The win represents Williams' second in a row against the man who denied him the 2011 NCAA Singles Championship, and his eighth consecutive victory on tour. He was last in action two weeks ago in Dallas, winning his first ever Challenger event, and getting to hold one of the largest tennis trophies I have ever seen. 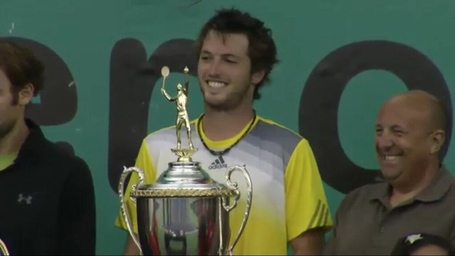 Williams will next take on either Bjorn Phau (ranked 122) or Alexandr Dolgopolov (ranked 23). More than likely, he'll be facing the 23rd ranked Ukranian with the swift feet, unorthodox playing style, and feminine facial features (seriously, google him). But even if that's the case, I wouldn't count out Mr. Williams. He is clearly coming into his own as a player and beginning to utilize to his full advantage the raw talent that allowed to win a professional tournament at the tender age of 16.

His second round match won't be played until tomorrow, and at a time yet to be determined. I would tell you to set your DVRs, but I don't think this tournament is being shown anywhere other than perhaps the Tennis Channel (which I don't have, and you probably don't have either). At the very least there should be a live stream of the match, and I'll point you in that direction when it gets closer to time.

And here is the part where I proceed to editorialize a little bit. I"m a bit of a tennis junkie. I have a twitter account, and roughly 25% of the people I'm following are also tennis junkies and are followed for that purpose: most are just random people I stumbled upon via retweets and what not, and others are legitimate figures in the world of tennis (e.g. Brad Gilbert, who is actually a really funny and down-to-earth dude). And seemingly all of them have begun frequently mentioning the name Rhyne Williams. Many are suggesting that he's the best American prospect of the bunch (which includes names like Ryan Harrison (who I think blows), Steve Johnson (who I don't think has as much upside as Williams), and Jack Sock (who has a TON of upside but some erratic results as of late).). I am simply unable to vehemently disagree.

Williams is a player with weapons. He has an excellent serve and one of the filthiest filthiest forehands that you'll ever see. His recent success is due in large part to an increased focus on fitness and conditioning, and also a noticeable shift from mental fragility towards mental toughness. He's a world-class tennis player, and he's noticeably improving. Let's keep our eyes on this former Vol, whaddaya say?