Picking an NCAA Tournament Bracket with Pythag and Log5, 2013 Edition

For four of the past five years in which we've created a pythag and Log5 bracket, it has finished 2nd, 3rd, 58th, and 16th in our own RTT pool. How does it look this year, and how will it do?

Five years ago, I filled out one of my NCAA brackets using nothing but team pythags, just to see what would happen. Well, the thing actually placed second in the Rocky Top Talk Bracket Challenge. After sleeping through the 2009 season, I did the pythag thing again, and the thing finished third. Just when I was beginning to think I was on to something, the pythag bracket completely crashed and burned in 2011, finishing 58th. Last year, it finished 16th, but was only a late Ohio State lost lead against Kansas away from finishing 2nd (assuming the Buckeyes would also have lost to Kentucky, like Kansas did).

So here it is again, swinging away. But first the caveats: Don't use this to gamble because, as I said last year, that would be like putting a Stupid sticker on your forehead. And you're going to want to double check my numbers and data entry because I'm accident prone and if you're reading this there's a very good chance that you care more than I do.

So onward: As a refresher, here's the explanation I offered back in 2008:

After staring at A Sea of Blue's post setting forth the odds for each of the NCAA Tournament teams to win it all for a half an hour, I concluded: whoa, numbers. But once I recovered, I thought it would be interesting to see how each game of the bracket plays out using Ken Pomeroy's data. Below is the NCAA Tournament bracket, with each region on top of each other (as opposed to the four regions facing each other in groups of two) because who among us has a 34" computer monitor? The play-in game is on top and the final four is on the bottom. The four digit number immediately next to each team is that team's pythag, and the percentages next to the pythags are those teams' respective "chances of winning" that game. For instance, based on their respective pythags, Mt. St. Mary's should beat Coppin State 88.85% of the time and so we'll consider them the winner and move them forward to play North Carolina. Yes, you can get the same result by looking only at the teams' respective pythags, but I think the percentages give you a better feel for how those numbers might play out on the court.

A couple of pre-post observations from Hooper:

Pythag uses "pace-neutral" weighting, which means it compares the ratios of point differentials but not the actual values of point differentials. For example, a team that averages 80 pts. for and 70 pts. against looks identical to a team that averages 64 pts. for and 56 pts. against. KenPom does this so he doesn't have to worry about how many possessions a team normally has in a game. But that does make a big difference in the play of a game. So you lose valuable data at the start. This is normal for every numerical method, but it's good to know what is being lost. What this means is that Kansas has had the best pts. for / pts. against performance per possession in the league. But we don't know how many possessions is ideal for Kansas, or even if it makes a difference.

If anyone wants to update the table to account for any of that, have at it. Start here, then read this [link dead], then read this. In the meantime, though, have a look at the table below, all dressed up in pretty Easter pastels for your enjoyment.

Oh, and one more thing: I've entered this bracket into the RTT ESPN Tournament Challenge so we can keep track of how well it does. If anyone calls Ken Pom an idiot because this entry doesn't finish in the top spot, I will personally come over to his house, pull out his toenails with a pair of pliers one by one every hour on the hour, write "no, you're the idiot" on each one in pink fingernail polish, and feed them to him. And Jackson the Mule will be right behind me to finish you off.

Okay, so that was a full five years ago. Below is this year's pythag bracket picks. Apologies for the small-ish graphics; they've been auto-resized by the SB Nation platform, and 15 minutes of fiddling hasn't cured it. You may or may not be able to download it. 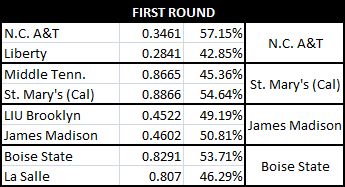 So three 1 seeds and a 3 seed in the Final Four? Okay. And no real surprise in the Elite Eight except for that 3 seed? Okay.

Sorta okay, anyway. Who around these parts trusts Florida to go all the way? That's what I thought. But we'll see.

Don't forget to enter your bracket in the Rocky Top Talk Bracket 2013 Challenge.