There were a lot of reasons to come away from the spring game on Saturday hopeful for the future of Tennessee football.

Will and I almost didn't make the kickoff at this weekend's Orange and White Game. We'd stopped at Gus's, caught up with each other and Hooper, and then got in Will's car to find a parking space that wasn't next to a "30 Minutes Only" sign. But it was crowded on the streets, and 20 minutes later, we finally pulled into a parking space all the way downtown, the same spot that Will uses for regular season games. With a long walk to Neyland ahead of us, we apologized to Hooper via text for stranding him at the Torchbearer, and we told each other that having to walk this far for the spring game was a good sign.

The attendance ended up being north of 61,000, the second-largest spring game crowd in the history of the program, and the first that wasn't following the 1985-'86 Sugar Bowl and to which Guinness hadn't been invited. (Guinness may have been the only entity not invited, come to think of it.). It beat the spring game in Lane Kiffin's first year, when half the people were glad to finally see Phillip Fulmer go and the other half were consoling themselves with the appearance of the coaching chimera and the treasure of enthusiasm (CRUNK!) it brought with it.

With every year that passes, I'm able to view Kiffin with a bit more objectivity. I do think he was on to something when he identified enthusiasm and confidence as a chief goal for the program at the time. If confidence breeds winning and winning breeds confidence, what does uncertainty and losing breed? And how do you re-enter the confidence-win-confidence-win loop when the thing's moving at SEC speed? You can't pretend a win, but you can pretend confidence to a degree, and if you're going to bootstrap yourself into the success loop, manufacturing belief and vision out of thin air is the place to start.

But where Kiffin did this by burning bridges, Butch Jones is doing it by building them. He's reconnecting important orange-hued people, places, and things, re-initializing the infrastructure. And he's not stopping there; he's extending these connections in every direction imaginable.

It was all on display at Saturday's Orange and White Game. The following are just a few observations that Will and I made to each other while watching Team 117 go through its reboot cycle.

The upper level was open, but fans were funneled to and encouraged to sit in the lower bowl. It's funny how a crowd of 60,000 can look like a poor turnout in a stadium that seats 100,000+. Things tend to expand into the space allowed (it's why the paper that's due next week takes a week and the same paper that's due at the end of the term takes all semester). By routing fans to the lower bowl, everyone sat closer together, so the crowd actually looked like its size. This was especially important for TV and recorded video. A crowd looks like a crowd when it fills the screen, and you can't see vast pockets of dreary bleachers.

The skyboxes were 1/2 - 3/4 full. Not only was the lower bowl full and crowded (but not uncomfortably so), the skyboxes were mostly full as well. I don't know whether the people sitting in those paid for them, but I'm betting that they were instead prospective skyboxers allowed a test drive with the windows down on a beautiful spring day and that new skybox smell. I bet many of them drove away with a new lease, too.

A ton of recruits were invited and were then shown how important they are to the program. The only pocket of non-orange in the crowd was a huge section at the home 50-yard line that seated about 200 recruits. We've probably all seen groups of recruits at spring and regular season games, but I've never seen a group of them this large, and I've never seen them sitting in the best non-skybox seats in the house.

VFLs in the house. Adding to the "show" aspect of the game, some of the most popular and most successful VFLs were not only in attendance, but actively involved in the party. Al Wilson was there, although I never saw him. I did see Eric Berry standing next to Butch Jones on the field while the team ran plays. Figures he was on the field when the defense returned an interception for a touchdown. And Arian Foster was up on a makeshift stage playing DJ. There were almost certainly others that I missed. 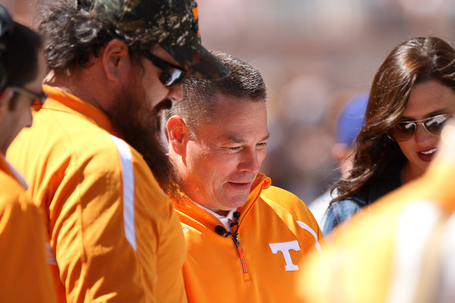 Celebrities in orange. And how good does it feel to see a celebrity at the height of his popularity smiling on the sideline wearing orange? Justin Martin from Duck Dynasty was not only there, he called a play that went 20 yards.

Fans were involved. Play calling wasn't restricted to celebrities, either. Several kids were allowed to choose plays from a giant foam board and have the team run them. It's important to note that broadcasting a trick play in advance generally gives the defense the advantage, but hey, it was fun for everyone except Pig Howard, who got clobbered attempting a pass on a reverse. Oh, and fans were already on board with the fist-in-the-air, led by the defense itself, after third-down stops.

Team effort. That interception for a TD came on a horrible pass into the flat by a walk on QB, whose name I didn't even recognize. After the defender caught it, he was gone, and nobody had any chance to catch him. And yet replays show three guys, including two huge offensive linemen sprinting -- not running for show, but sprinting -- toward the play they had no chance in the world of making. They didn't stop until the guy crossed the goal line. All game, the teams ran to the scrimmage line. They snapped fast, they played hard, they didn't quit.

The Post-game. When the clock hit all zeroes, the team formed an old style high-five line, and when they were through the line, they ran to the Pride of the Southland Marching Band, and when they all got there, they all stood together and sang Rocky Top. Really, it was contrived, and you could tell that many of the guys were sort of going through the motions. But they were there, and they were doing it. And when that scene follows an actual game that matters, I guarantee you that it will be special. I dare you to remember without getting goosebumps Peyton Manning or Casey Clausen directing the band in Rocky Top after big wins. If we get that big win, and if the team is down there and we're all signing Rocky Top together? That's a Moment.

Notice that I didn't say much about the team. It had its moments when big plays by either the offense or the defense brought the crowd to life. But it was also full of mistakes that shouldn't happen and general evidence that this is largely a new and inexperienced team that is most likely going to be outmanned in most of the games that matter this fall. We also don't know how much damage a tough season may do to the fragile faux confidence. But if they can get just one big upset, that confidence instantly becomes real and gets a foothold, and I like Butch Jones's chances with a foothold.

So yeah, nothing we saw on Saturday means that the Tennessee Volunteer football program is going to be successful on the field again this fall. But daylight doesn't come with the flip of a switch. It comes in gradations, one almost imperceptible glimmer of light at a time. And when those glimmers begin to compound, they turn orange, and then you know that daylight is just over the horizon.