The day's news includes yet another reason that Butch Jones might just know what he's doing, a little empathy for Tyler Bray, and rising expectations for the basketball Vols.

In case you missed it, the overall No. 1 pick in the NFL Draft this year was offensive tackle Eric Fisher. Why does this matter to us? He was from Central Michigan, and he was essentially not recruited by anyone out of high school except . . . our very own Butch Jones. And he didn't just recruit him, he developed him, mostly with peanut butter and jelly, apparently, but you know. So that 2014 recruiting class that is currently ranked 4th in the nation by Rivals and 5th by 247? Yeah, go ahead and feel especially good about that today. It's not just the legacies and the in-state players who were starved for attention under Derek Dooley. Eric Fisher being No. 1 says that Butch Jones knows talent when he sees it.

There are a lot of jokes going around about Tyler Bray declaring early for the Draft and not getting selected. Some of them are even sorta kinda funny, but man, I feel bad for the guy. Mike Strange sets the stage to help us imagine what it must have been like, ticking off the QBs who went before the guy who broke some of Peyton Manning's records: Brad Sorensen of Southern Utah, Zac Dysert of Miami of Ohio, B.J. Daniels of South Florida, and Sean Renfree of Duke. I concede that Bray had some marks on the wrong side of the ledger, but I am shocked that nobody wanted to spend a draft pick on him.

On the upside, the folks at Arrowhead Pride are thinking, rightfully so I believe, that they got an absolute steal if the reports are true that Bray has been picked up by Kansas City as an undrafted free agent. Seriously, a guy who gets over 7,000 yards and 69 TDs in three years in the SEC can't be all that bad. 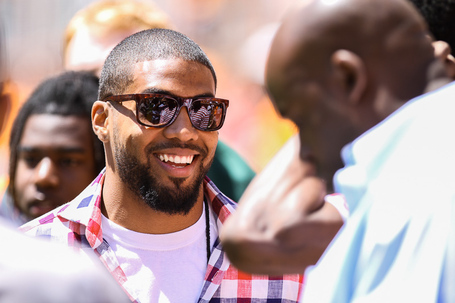 I_S has already weighed in on Jarnell Stokes returning to Tennessee, and Mike Strange contributes to the growing sentiment that the basketball Vols should be really, really good next season. Stokes back? Jordan McRae back? Jeronne Maymon returning? New 5-star guard Robert Hubbs joining the team? Oh, yeah. Just try to manage those expectations.

We'll get a chance to see Hubbs (and most of the guys currently on the roster as well, plus Bobby Maze, Wayne Chism (Weezy!), and Melvin Goins) in the new and improved air-conditioned Rocky Top League. Oh, and hey. Another 5-star guard has narrowed his list down to six: Louisville, Indiana, Florida, Illinois, Ohio State, and Tennessee. Pretty nice to be in that list.

Etceteras. GVX has a round up of where former Vols are headed after the NFL Draft. . . . Phillip Fulmer weighs in on the strength of the SEC and says exactly what you'd think he would say. . . . Tennessee just hired a new associate AD for football whose last name is "Vollmar." Of course.