Share All sharing options for: Talking Points: On leadership, legacies, and talent

This morning's edition of Talking Points is brought to you by Rocky Top Tennessee 2013, now with 100% less Derek Dooley! This year's edition is 100% whole grain, a great source of fiber, and contains NO high fructose corn syrup, trans fats, or artificial flavors or sweeteners. It is also loaded with 100% all-natural Hope, and will provide a healthy and sustained energy all summer long, all with a dash of cinnamon and honey. Back the project now. It's good for you! 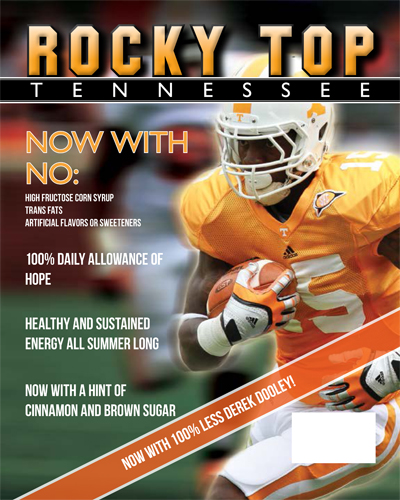 Tennessee wide receivers coach Zach Azzanni says that the primary concerns for the summer are talent and leadership, but mostly leadership. And talent.

VolQuest has a great feature on 2014 reruit D'Andre Payne. Dude seems like not just a solid talent, but a solid kid. He's staying in close touch with the rest of the "Legends Class," guys like Todd Kelly, Jr., Vic Wharton, and Jalen Hurd, and all of them together are developing relationships with other as yet uncommitted prospects like Stanton Truitt.

The whole legacy thing is bleeding over into basketball now, as Philip Cofer, son of former Vols linebacker Mike Cofer, is being chased by Cuonzo Martin and company.

Jordan McRae, by the way, was named the team MVP at the team's season-ending banquet Monday night. Guy nearly doubled his points per game last season. So glad to have him back again next year.

Mike Strange takes a look at success stories of undrafted free agent quarterbacks and wonders whether Tyler Bray has what it takes to follow in their footsteps.

Etceteras. Tennessee has extended AD Dave Hart's contract by a year, and is working on another year for Pat Summitt. SEC Commissioner Mike Slive says the name of the new "College Football Playoff" was chosen due to its simplicity. That's one way to put it.