Share All sharing options for: 100 Days of Vols #17 - Your Favorite Player

The first UT game I ever attended was the 1998 game against Florida. If I'm being honest, I really wasn't a Tennessee fan when I walked into that stadium the night of September 19th.  I didn't grow up in Tennessee, and so I don't bring any fanhood allegiances with me when I rolled into Knoxville in 1998 for fun and higher learning.  I had only been on campus -- and living in the fine fine lodging establishment known as Hess Hall -- for a few weeks.  A good fanhood requires a little bit of time to bake.  Mine was still in the oven.  Don't get me wrong, I wanted Tennessee to win the game, and I was singing Rocky Top as loud as I could (and, yes, I was doing the "woo".  I do woo, and so should you.).  But I wasn't fully invested -- I didn't *really* care.

BUT Neyland Stadium was electric that night.  This was definitely an atmosphere I could get used to.  I knew going in that the color orange would be everywhere, but man the color orange was FREAKING EVERYWHERE.  This was cool.  I was very much enjoying my first gameday experience, and in just a few hours I would walk out of Neyland Stadium (a) with a piece of the field in my hand and (b) as a certifiable, full-blown, card-carrying, Vol. For. Life.  Deon Grant played a major role in the transformation.

I can only remember three plays from that game: Shawn Bryson's touchdown run, the missed field goal that ended the contest, and Deon Grant's interception.  Oh how glorious it was.

The score was tied 17-17 halfway through the fourth quarter.  Jessie Palmer and his excess hair gel had started their drive at the 15 yard line but were now near midfield.   Palmer thought about his hair for a few seconds, and then saw that his vertical receiver had our guy beat by a good two steps, and so he reared back (while also pondering the state of his hair), and threw it deep.  The throw was right on line.  And our guy was definitely beat.  This was a sure touchdown for Florida.  Until it wasn't.

No still picture, gif, or video clip can really do justice to what happened next.  I hate to be "that guy", but you really had to be there.  Grant was nowhere near the receiver.  If you were watching the flight of the ball or its intended receiver, as most people likely were, then you didn't even know Deon was close to the play.  And then out of nowhere a dude in an orange uniform is swooping through the air and into your field of vision.  You see #7 gracefully soaring three heads above everybody else -- twisting and contorting his body mid-flight as if he were the offspring of Michael Jordan and Gumby -- and then snatching the ball out of the air with one hand...before landing in full stride.  It was a thing of beauty.

This wasn't the only big play that Deon Grant made during the Vols' 1998 National Championship run.  It was just the prettiest and the one that I most clearly remember.  Deon Grant made huge plays for us throughout that entire season.  He even capped off the season on a high note by tipping a pass in the BCS Championship Game -- thrown, of course, by the renowned QB Marcus Outzen -- to Steve Johnson, who held onto it for the interception.

Fast forward about a week, maybe a week and a half.  It's the start of second semester, and I'm hating the fact that the only time slot I could get for a required Calculus 2 course was at 8:00 am.  Ugh.  I'm not much of a morning person as it is, and I'm annoyed because I just figured out that pretty girls apparently only go to class when it's warm outside.  Our professor, a picture of who is provided directly below, is taking the roll. 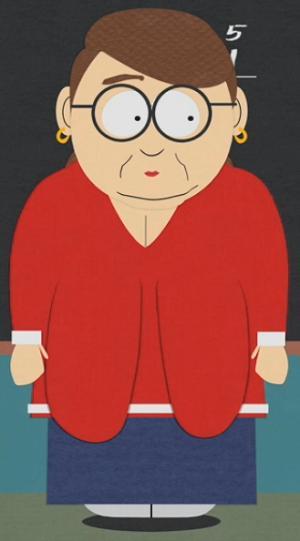 Again, I'm not paying a ton of attention to her as she goes through the roll.  I'm mainly thinking about how weird it was that there were so many pretty girls on campus the first day of Fall semester, but then so few on the first day of Spring semester.  Calculus was way less puzzling than this.

But I did turn my head up when she announced "Dean Grant", and I glanced over to see Deon Grant acknowledge his presence.  She called him "Dean Grant" the entire semester and he never bothered correcting her.  But that isn't the point here. The point is that Deon Grant was taking Calculus 2!  Why in the world was Deon Grant taking Calculus 2?  I subsequently found out that he was an engineering major, which just blew my mind.  I mean, I was an engineering major, but my chances of getting drafted into the NFL were arguably not that great.  Deon Grant, on the other hand, was a certifiable stud on the gridiron.  And engineering, in its various forms, was and is the most academically demanding major at UT (by far).

So, anyway, that surprised me.  But what surprised me even more was a few months later, when I'm walking out of Hodges Library while Deon is walking in, and he goes out of his way to strike up a conversation with me, which went something like this:

Deon: Hey man, I saw you at the boxing tournament. You fought real good, man.

Me:  You were at boxing tournament?

Deon:  Yeah, my friend from Augusta [insert name] boxes Golden Gloves and he trains out there, and we went every night.

Me:  Oh yeah, I know him.  I didn't realize y'all were both from Augusta.  Hey, I haven't seen you in class the last few days.

[conversation continues for a few minutes.  he thinks the class is tough and it sounds like he is pretty far behind.  There is some more quick small talk, some "i'll see you in class" parting remarks, and then we head our separate ways]

Now, was that the most meaningful conversation in the history of the world?  Arguably it wasn't.  But Deon Grant said I boxed well.  This made me feel pretty cool.  Kinda still does.  After all, he's Deon Grant -- my favorite ever Vol.

Who's your favorite player?  And why?