Put down your shovels and climb.

Share All sharing options for: 10 Questions for 2013 #3 - How much better will the defense be?

It is not hyperbole to say the 2012 Vol Defense was the worst in school history, or to say that it cost Derek Dooley his job. This time last year we thought the Vols were a nine or ten win football team, and I still don't think those projections were wrong based on the talent at hand and the offense we saw. I think most if not all of us are happier to have Butch Jones, this recruiting class, and a fresh start than Derek Dooley back after an 8-4ish campaign, the same offensive holes, and a much bleaker future. None of us will miss Sal Sunseri. And unless they're inexplicably worse than the product we saw on the field last fall, the defense will improve.

But how much, how soon? With a passing game breaking in entirely new pieces and the offense still planning on an up-tempo pace, can the defense measurably improve, hold their own, or perhaps even eventually become a slight strength at some point this fall?

In 2008, a defense led by John Chavis gave up just 4.07 yards per play. Only Alabama's 2011 defense (at an absurd 3.32 yards allowed per play) has put up a better number in the SEC in the last five years. Since Chief headed to Baton Rouge, here's how the Vols have measured up in yards allowed per play compared to defensive coordinator John Jancek's units (co-DC at Georgia in 2009, then three years at Cincinnati): 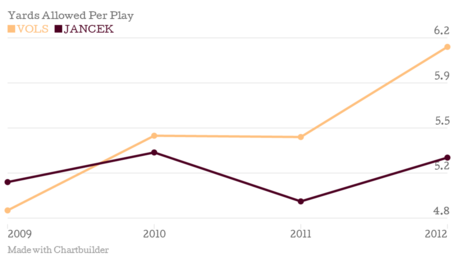 The national median last season was 5.56 per play. Tennessee's 2012 average was only bested by a pair of Houston Nutt defenses at Ole Miss for the worst in the SEC in the last five years.

Yards per play is a great go-to stat as an equalizer, but the old favorites are still helpful. One area Cincinnati has been superb at the last two seasons is keeping points off the scoreboard despite an up-tempo offense: 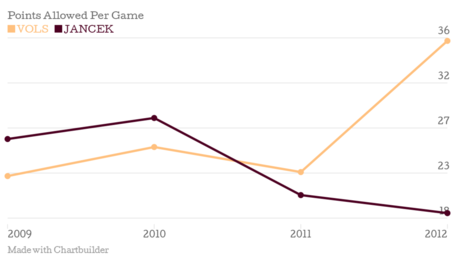 The Bearcats were 14th nationally in this stat last year at 18.5 points allowed per game. Cincinnati allowed more than 24 points just three times: a 29-23 upset at Toledo, the 34-31 loss to Louisville, and a 48-34 win over Duke in the bowl game with Jancek already gone.

So yes, the Vols can't help but be better and this defensive staff has a strong track record with consistent improvement. The Bearcats struggled in Butch Jones' first year, and we all expect Tennessee to do the same (for different reasons). This defense, despite Jancek's presence along with that of A.J. Johnson, Daniel McCullers, and the like, will still have serious issues in 2013. But where can we legitimately expect improvement?

This time last year Tennessee was transitioning from the bend-but-don't-break philosophy of Justin Wilcox to newcomer Sal Sunseri, and the defense was accompanied by an offense that we knew was going to put a ton of points on the board, so we thought hey, why not be more aggressive when you know your guys are going to go down and put six on the board anyway? Last year we mentioned if the Vols could just make slight improvements in four major categories - turnovers, sacks, third down conversions, and big plays allowed - they should do more than enough to win playing with Tyler Bray & company.

Instead, this is what happened:

Also what we missed: while Wilcox's defenses were respectable in the red zone, allowing points 79.1% and 80% of the time in 2010-11, Sunseri's defense absolutely folded. Tennessee allowed points 91.5% of the time in the red zone. Add in all the long touchdowns we gave up where teams didn't even need the red zone, and you get the worst defense of all-time.
So again: nowhere to go but up.
I'm convinced the Vols aren't going to give up as many big plays this season. The sacks and turnovers have been an issue long before Sunseri came and went, so any changes there would be welcome but we'll have to wait and see.
To me, two stats to keep a close eye on are third down and red zone numbers. Can this defense get off the field, and can the Vols hold teams to three instead of seven? Last year we could give up seven and compete because of our offense. This year, not so lucky. Three instead of seven is a must.
Jancek's third down numbers were almost identical to Tennessee's last year (38.7% for Cincy, 38.8% for UT), so that's not what you want to see. Both ranked in the middle of the college football pack. But the year before Cincinnati was 12th nationally in that stat at 32.5% allowed. But the Bearcats were ferocious in the red zone: opponents scored just 70% of the time (12th nationally), and only got in there 40 times in 13 games (23rd nationally). Best of all: last year the Bearcats were one of only 18 teams in college football to give up more red zone field goals than touchdowns. Cincinnati's 42.5% red zone touchdowns allowed percentage was fifth best in the nation, better than any SEC team fared.
We all know we're getting an upgrade in the X's and O's, and it could be a significant one. Do the Vols have enough Jimmie's and Joe's to make the defense a strength? Right away, perhaps not...but as freshmen mature, those returning from injury get healthy, and this unit meshes together, don't write off the Volunteer defense completely in 2013. We need anything we can get from these guys while the passing game finds itself.
I'm tired of writing about last year's defense, you're tired of reading about it, and most of all these players are tired of it being their defining mark. With a new and proven coordinator and plenty of talent returning in the front seven, these Vols have a chance to write a new story. Last year Tennessee's defense was a complete joke, the worst we've ever seen. But the foundation as the Vols rise to the top can be laid, in part, by Team 117's defense taking the worst we've ever seen and making it something new in 2013.