What will the Vol offense look like this season?

New coach, new offense. It's a familiar story for Tennessee, where once again a new offense and a new coordinator will take the field this fall. We've seen varied results in the last few seasons under different coaches: 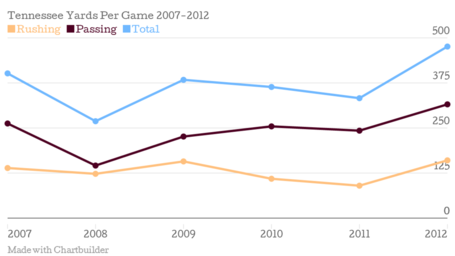 Tennessee thrived under David Cutcliffe in 2007, and picked up steam in the second half of 2009 under Lane Kiffin & Jim Chaney. And we all remember last season, where the Vols averaged 475.9 yards per game to finish 18th in the nation in total offense. Offense doesn't always lead to victories, as we saw last year where it didn't even sell that many tickets. But when it looks like the Clawfense in 2008, which was balanced ineptitude, your team won't win.

Here's the same information for Central Michigan and Cincinnati over the last six years, under the guidance of Butch Jones and offensive coordinator Mike Bajakian: 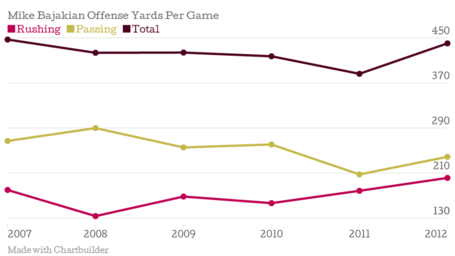 To be sure, there's a strength of schedule component here. Life will be more difficult in the SEC. And to be sure, Tennessee is still at a talent disadvantage, especially at offensive skill positions. We'll get to the Jimmies and Joes later in our questions countdown, but first a quick word about the X's and O's.

Did the Vols have a single snap in the Orange & White Game that wasn't in the shotgun? If so, I don't remember it. So there's plenty of evidence to suggest Tennessee is going to spend the vast majority of its time in the shotgun whether its quarterback is mobile or not. However, just because you're in the gun it doesn't mean you can't run the football; last year Cincinnati went for 201.6 yards per game on the ground.

It becomes a question of balance and playcalling: how often can we expect Tennessee to keep it on the ground, even out of the shotgun, with experienced tailbacks behind an awesome offensive line while the quarterbacks and receivers get their feet wet?

Here's the percentage of run plays the Vols and Mike Bajakian have called in the last six years: 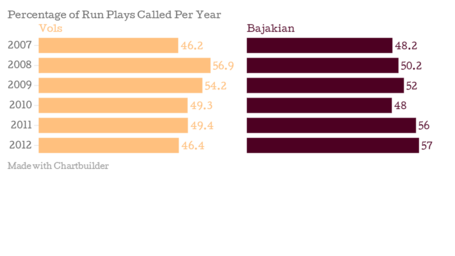 As you can see, Tennessee leaned heavily on the run during the Jonathan Crompton Era, and leaned heavily on the pass with Erik Ainge and Tyler Bray last fall. Bajakian's offenses were much more balanced at Central Michigan (see: LeFevour, Dan) and the first year at Cincinnati, but each of the last two years the Bearcats went heavily to the run game, and had great success at it as you can see in the previous chart, especially last year.

So yeah, expect Tennessee in the shotgun, but you might also expect the Vols to run not just more than what we saw last fall, but more than what we've seen at any point under Derek Dooley. Part of that is not having Tyler Bray, of course, but the general idea remains that "shotgun" or any form of "spread" is not equal to "not running the football". These Vols can and probably will run. A lot.

Does Tennessee have the horses for that? We're about to find out. It may be a different look than what we've seen around here before, with a combination of heavy shotgun and heavy run, but it has been successful for Coach Jones and Coach Bajakian in the past.