It's only been two games, and the data is fairly unreliable because of that, but boy, there sure is a lot of new green in our Top 30 charts.

First, the caveats, because even lawyers of the former variety can't help themselves: The numbers can't mean much at this point in the season. Some teams have played opponents like, oh say Austin-Peay. And some have played both Clemson and South Carolina. So relative numbers should all be viewed with eyebrows raised to the back of your neck. And even when we get closer to a full data set toward the end of the season, these are rankings, and the actual numbers resulting in those rankings mean more. But this is college football, and rankings matter, so we roll.

With that out of the way, here's the stuff after two games. Green means Top 30, red means Bottom 30, and yellow is the big, fat middle. First up is the Stuff UT is Doing Well: 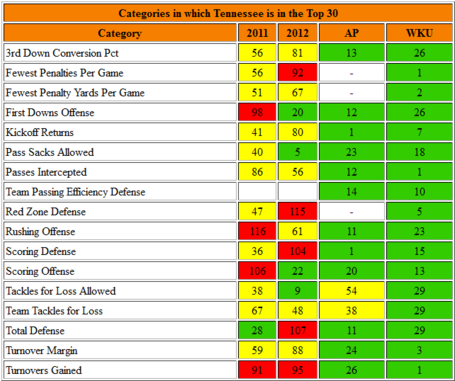 That's a whole lotta green where there didn't used to be green. The penalties thing held up after two games, which is cool, but we'll have to watch it. A couple more aggression-type penalties might not be so bad. Are they sort of like fouls in basketball? Anyway.

Give me three woos for Rushing Offense. And for any category relating to defense. Oregon, here we come! (I'm kidding. But now that I think about it, why do we have Oregon colors in our charts? Oh, it's because the Ducks are also like a stoplight, except without the red.

#OPPORTUNITY is no longer hidden

Yeah, we called this section #opportunityisnowhere last year. I think we'll retire that and just pretend it didn't happen, mmmkay?

But we do (and probably will) still have a couple of categories to watch down here in the cellar. Not sure why Net Punting is in the hundreds right now. Passing Offense may be because we haven't had or wanted to rely on it much yet, or it could be because of accuracy and arm strength issues. And new receivers. And . . . well, let's just keep an eye on it.

And here's the rest, for tracking purposes. 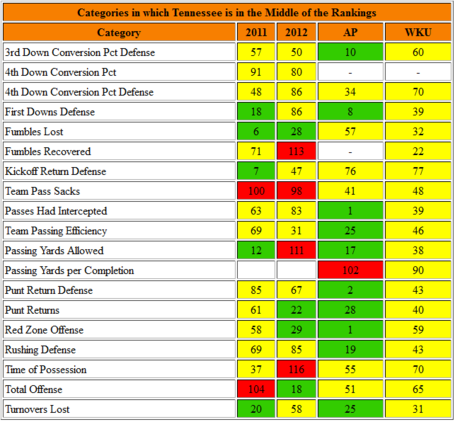 Players in the Top 30 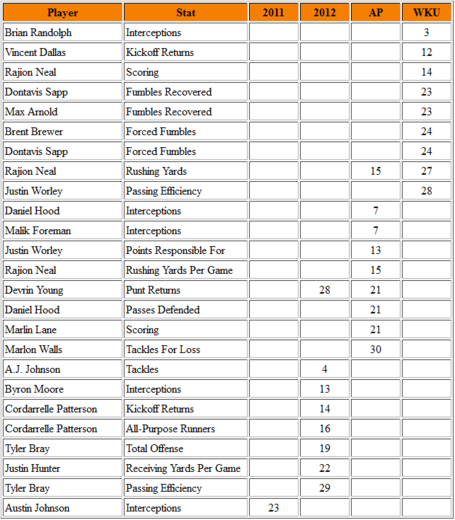