The 2014 State of the Tennessee Volunteers Address

Once a year, the Ghost of General Neyland addresses the Volunteer Nation to (a) report on the current condition of the various Volunteer athletic programs, (b) outline the Sovereign's strategic agenda for the upcoming year, and (c) call for cooperation among the fanbase as we strive towards a return to the land of the elite.

Share All sharing options for: The 2014 State of the Tennessee Volunteers Address

Mr. Manning, Ms. Summitt, my fellow Volunteers.  This chamber speaks today with one voice to the people we represent:   You over there with the orange checkerboard overalls.  You in the back with the orange polo shirt and orange pants.  You by the refreshment table rocking the Al Wilson jersey.  You all are the lifeblood of our program.  None of this exists without your support -- be it in the form of paid attendance at athletic events or the purchasing of Tennessee sweatshirts, hats, gloves, mittens, jackets, clocks, golf-club bags, golf-club head warmers, flags for both house and car, coozies, snow-globes, crock pots, watches, Power-T magnets, and license plate holders.  We're in this together.  Vols for life.  One Nation under Orange. We strive for excellence because that's what you expect.  And those expectations should not -- check that: can not -- be lowered.  And let the record reflect that this man's checkerboard overalls are TENNESSEE orange, and not CLEMSON, TEXAS, MIAMI, or SYRACUSE orange.  This is an important distinction.

Neyland Stadium -- the place my boys and I built; yeah, it's named after me...I"m kind of a big deal --  is not located on the campus of Clemson University.  No no, this is The University of Tennessee -- a institution with a history of athletic excellence longer than my....  Well, let's just say it's pretty long.  Plenty long enough to establish excellence as binding precedent -- the freaking law of the land.  This is not Year Zero, and I have never planted Bamboo.  I speak about winning in the present tense: unadulterated, uncut awesomeness delivered straight into the fun zone.  That's just how The General rolls, kids. 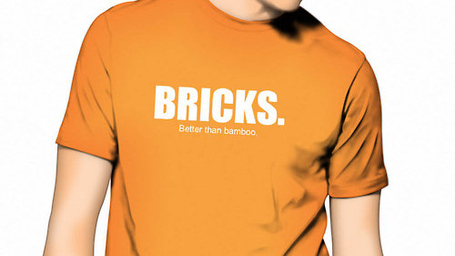 Now If mediocrity is more your thing, there's still a place for you.  Just head South for about 150 miles, then bust a Louie and head East for about 50 more. You'll see signs for Clemson, and I'm sure you'll have a great time there.  But for those of you who prefer crystal footballs to Howard's Rock, just know that we're on the same team and the same page.  Keep demanding excellence, and we'll get there.  Here's how.

Know this: despite our lack of success in recent years, the football program is healthy.  The FootVols are ready to make substantial improvements on the gridiron, and in short order.

Coach Butch Jones has filled 34 entry-level positions with some of the best and brightest young talents in the country. These additions will help increase production in areas our workforce was previously lacking both in numbers and skills.  We will see immediate and direct gains as a result of the upgrade to the competence of our workforce.  And we'll also see ancillary benefits as a result of the increased competitiveness of the enterprise.  Talented and ambitious young men will vie for spots on the depth chart, and the level of performance from all parties will increase as a result.

This is not mere lip service, and this is not a sales pitch.  Tennessee will put a better quality product out on the field of play next year.  You'll see it with the general eyeball test, and you'll see it in the wins and losses column as well.  This is a promise.  And, yes, you can quote me on that. 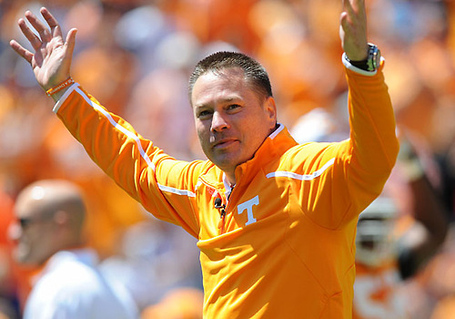 The men's basketball program has not been producing the cash inflows that we expected and designed our budget around.  We haven't ruled out the possibility that the issue is one of competent leadership, or the lack thereof.  And we therefore haven't ruled out the possibility of making leadership changes.  This is of course a process that nobody enjoys, but we have to be fiscally prudent and not operate a deficit.  And the numbers tell the tale.

In each of the 2007-2010 seasons, Tennessee was fourth nationally in basketball attendance.  This is a school and this is a town where basketball can thrive.  People want to come watch quality basketball.  You give them quality hoops acton, and they will come, and we know this.  Which is why we're very concerned that last season we had slipped to 8th nationally in attendance.  From 2007-2010 the average attendance at Thompson-Boling was 19,895.  Last year our average attendance was 16, 543.  If we assume for simplicity of example, that each of those tickets cost $50, and that we had 18 home games in both seasons, that's over 3 million dollars of lost revenue per season.

We are quite aware that the decline in attendance is in large part due to the quality of the product that has been put out on the floor.  Again, the gentlemen's agreement.  We're also aware that great coaching and great teams tend to go hand in hand.  And while we have yet to make any definitive decisions on whether it is indeed time to make a leadership change, this is a possibility that we're actively investigating. Tennessee has amazing facilities and a fanbase that wants to be a part of something great.  I see no reason why we can't deliver. 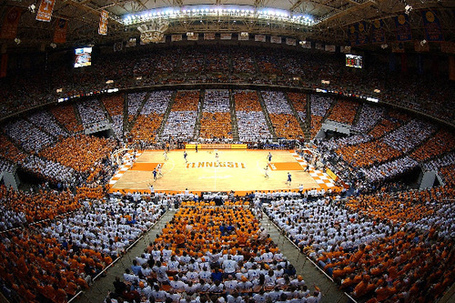 The Lady Vols are troubled. This happens when the general populace is unsure of their roles within the framework of a squad. Prior status reports reflect unsurprising results like getting blown out by Notre Dame, which helped to drive home the relative absurdity of bizarre management decisions like losing to Vanderbilt in Memorial Gym (admittedly under hazardous non-standard conditions). Throw in a loss to LSU -- a team that, it should be noted, appeared to be exceedingly well coached -- and a one-woman demotion squad in Palo Alto and there's cause for concern.

On the other hand, the raw materials haven't changed and recent status reports (the general demolition of Georgia, Texas A&M getting steamrolled at home) indicate the problems appear to be internal. It's too soon to make summary judgments of upper management, but the situation bears monitoring as data is still arriving.  Speaking of data: did you know that the Head Coach of the aforementioned well coached LSU team is a former Lady Vol named Nikki Caldwell who grew up in Oak Ridge and was an assistant coach under Pat Summitt before landing her first head coaching job?  Yeah, I just thought that was interesting.  Small world, you know? 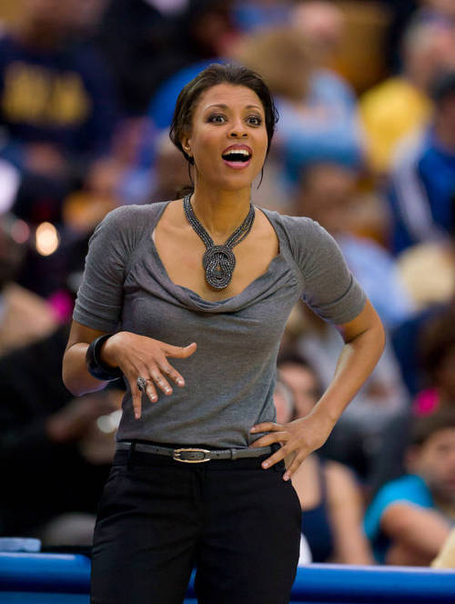 By utilizing principles of cooperation, and not competition, with foreign countries, we can achieve greater results within our borders.  Nowhere is this more evident than with the UT Men's Tennis Team, which is presently the most nationally competitive sports team on campus.  Head Coach Sam Winterbotham -- who was born in England -- and Assistant Coach (and Knoxville native) Chris Woodruff have consistently put a nationally competitive team together, and in a few instances they've done so under the difficult circumstances of three of your best players departing, with two of the three being unexpected (J.P. Smith graduated, while Rhyne Williams and Tennys Sandgren turned pro).

Did Coach Winterbotham curl up in the fetal position and console himself with daytime television and Ben & Jerry's ice cream by the pint?  Nah.  That's not how he rolls.  Instead, he just casually picks up a few top quality guys from Tennessee, then rolls over to Lithuania and Estonia and comes back with a guy who is now one of the very best players in college tennis.  And then of course he swings by Australia to pick up a player or two (There has been an Australian player on UT's tennis roster every year for like the last 30 years).

And just like that, we're back in business.  Tennis season is underway and the Vols are #6 in the country.  The goal of course is to win the NCAA Championship.  The Vols have come close under Coach Winterbotham and if he keeps putting out teams that are in the hunt for a National Championship, then eventually the hardware will find it's way into a trophy case at Goodfriend Tennis Center.

Further updates on the Vol tennis squad will be provided by the esteemed RTT poster, kidbourbon.  So stay tuned.

Tennessee's investment in baseball research and development may finally be ready to pay off as Coach Serrano's rebuilding campaign enters year three. A top-15 recruiting class headlined by two of Baseball America's top 100 high school players, #52 Lane Thomas, an outfielder from Bearden HS (TN), and #90 Benito Santiago, a catcher from Coral Springs Academy (FL), will add depth and talent to a returning team featuring two of College Baseball Daily's top 100 players, with the power hitting duo of shortstop AJ Simcox and outfielder Christin Stewart checking in at #42 and #61, respectively.

The BaseVols will need all the hitting prowess they can muster as they try and outscore a leaky pitching rotation that struggled to a 5.37 ERA last year. With another tough out-of-conference opponent in Arizona State and the always solid SEC conference schedule, this year's team will need the young pitching core to play with more consistency to have a chance to move up in the conference pecking order. Last year's 22-30 record (8-20 SEC) was unacceptable on Rocky Top, but with a young, talented roster returning, Coach Serrano looks confidently toward the February 14th season opener. Schedule: http://www.utsports.com/sports/m-basebl/sched/tenn-m-basebl-sched.html

The level of excellence that we all want now and for the foreseeable future -- a rising Vol Nation where hard work is the rule, where teammates work together to make stronger teams; where the buzz among the fanbase is a positive one because we've all got a hunch that huge successes are not just probable, but possible, and maybe even imminent. None of this is easy, but if we unite together, we can summon our very best both collectively and individually.  With our feet planted firmly in today but our eyes cast towards tomorrow, I know it's within our reach.