Tennessee Football: Previewing the Kentucky game with A Sea of Blue

Previewing Saturday's game with our Kentucky brethren from A Sea of Blue.

Share All sharing options for: Tennessee Football: Previewing the Kentucky game with A Sea of Blue

Will Marshall, editor and blogger extraordinaire at SBNation resident fan site A Sea of Blue, was kind enough to answer all of our burning questions about Saturday's game. (You can read my preview of Tennessee for A Sea of Blue here). Presented below is our email exchange in its entire, mostly unedited glory.

When Kentucky has the ball

Neal Brown has done a fantastic job conjuring points out of the Kentucky offense this year. How has he managed this feat while using almost the same personnel from last year?
I'd disagree that Brown has conjured points out of the offense this year. There's been 7-8 returning starters and they should've improved. Last season they were averaging 21 points per game, but this year it's 29 points. It's not perfect, and points are definitely being left on the field, but I'll take it. I think to expect more than 35 points per game is beyond UK until the 2015 season.
Well, what do you call turning Towles into such a prolific passer one year after playing musical chairs at quarterback?
Towles always had the physical abilities but need a redshirt year for maturity. My friends on campus inform me that last fall Towles asked for redshirt last summer, and then started rushing a frat before the final word may have/have not been given. He wanted to be a college student which is natural.
Starting in January, after Maxwell Smith's second shoulder injury, he knew he had a chance to be a starter. So, at that moment he placed more emphasis on the mental aspects of the game. This info is second, and sometimes third-hand, so take it with a grain of salt, but I think it represents how most teenagers slowly realize what they are capable of and what's expected of them.
Towles is the reason the offense is averaging a TD more a game, and I'm someone who didn't think UK's QB made that much of a difference the last few seasons. The offense wouldn't be nearly as explosive without him under center.

When Tennessee has the ball

The Kentucky defense has been impressive all year... What the heck happened against Georgia?!
UK's defense all season has been of the classic "bend but don't break" variety. UK's defense will not win any beauty contest from solely looking at box scores but they typically do a good job of minimizing points. It's funny because FSU fans said the same thing about Mark Stoops at FSU, but he continues to do the same at UK with a more blitz-heavy style. The difference the last few weeks is that UK's defense isn't turning offenses over. UK missed a golden "pick six" against Mizzou but dropped the ball. Small things like that could change the wider perception of their performance.
Za'Darius might be suspended out injured for the Tennessee game. How big of a loss is he?
News to me. Yesterday's practice report indicated that Smith is going to play Saturday. UK needs him, but his back-up Farrington Huguenin has seen quite a few reps this year. Huguenin is no doubt a step down from Smith though. All hands must be on deck to slow down UT's offense.
Tennessee's offensive tackles have been somewhere between mediocre and awful; does UK have anyone in the interior who can prevent UT from double-teaming on the outside to protect the tackles?
This may be UK's saving grace. Nose tackle Melvin Lewis has been impressive this season, as has his back-up Matt Elam, and they both are true two-gappers. I honestly like those two more than I like Mike Douglas and Smith who are typically aligned head-up on the OTs in the traditional 3-4 alignment.
If UT's OT's struggle then I suspect Bud Dupree won't be dropping in coverage much and will be rushing. Then again, if that's the case, UK will be playing Cover 3 and the seams will be open for Wolf or other slot receivers.
Stoops and DC DJ Elliot love to blitz the nickel back, just like at FSU, so I assume that'll happen more on Saturday. UK has to have several negative plays to win this game, because the offense will be hard-pressed to score points.

Name one Wildcat player on each side of the ball who Tennessee fans should know.
Vol fans should know Patrick Towles on offense. He's got a NFL caliber arm that can throw the Out route from the opposite hash. He's also mobile enough that UK has decided a direct snap to him is UK's best running play. UK's interior OL is not great, and perhaps the extra blocker makes all the difference in the world.
On defense, Vol fans should be aware of Bud Dupree. He's a likely 1st or 2nd round NFL draft pick. If he'd played the traditional DE role in a 4-3 he probably would have good numbers this year (like last season), but the coaches have asked him to play a OLB role in the 3-4 so he's had to drop in coverage more (like he did in Joker's last year) and not rushed quite as much. He's a stud athlete who when unleashed makes offensive tackles look silly. An impressive quality this season is how much he's improved against the run.
What about Kentucky's skill position players? Von Pearson, Ethan Wolf, and Jalen Hurd have transformed the Tennessee offense (I wrote a whole article about Hurd). Towles has JoJo Kemp... Who else should I know?
Man, really wish UK had been able to sign Wolf. So close, so far...
Stanley "Boom" Williams has surpassed Jojo towards the end of this season at RB, and cemented himself along with Braylon Heard as the 1 and 1-A RB. Both have the speed and vision to break long runs. That's not fan-speak either, but I would be surprised if UT's run defense allows them to do so.
UK recently moved WR Javess Blue to inside receiver in the hopes of optimizing his skills, and so far that's worked pretty well. He can make big plays on safeties and linebackers, but is more of a possession receiver if he's matched with CB's.
I really like freshman Dorian Baker, but it may take two years for him to be a true weapon. For now, he's a pure, physical possession receiver on the outside. I think he can be a Keyshawn Johnson (yeah I said it)-lite receiver by his junior season.
A lot of UK fans would have listed WR Ryan Timmons by now. He's good but inconsistent. If he catches the ball in space he has the ability to make defenders miss, but he's gotta catch the ball in space first. He dropped two different passes within UK field goal range that would've won the game against UF at the end of the first half and again at the end of regulation.
Freshman RB Mike Horton has increased his carries. He's a big, physical running back who reads his blocks well, and goes on to run through tackles. He catches the ball well out of the backfield, and can make DEs miss tackles on the edge. He'll also be pretty good in a few years along with Boom.
Lastly, WR senior Demarco Robinson has had a great year. He won't break a big play, but he will make tough catches in traffic and break tackles. He's all of 165 lbs which makes his play all the more impressive. Robinson is a legit possession receiver threat, but he won't burst UT for big plays. 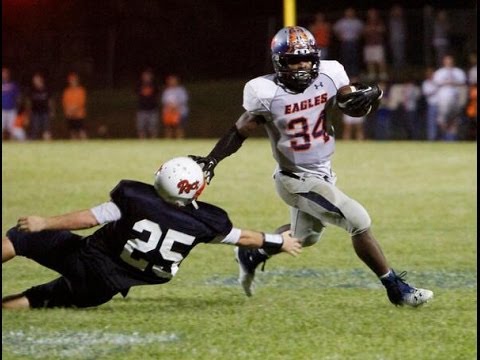 Image courtesy 247 Sports
Bonus recruiting question: will Damien Harris (a five star running back and Kentucky native) sign with Kentucky? How exciting would that be (highest rated recruit since...)?
Gun to my head I'm guessing that Harris signs with UK. He's been to the last (at least) four home games this season, and it would be very exciting for fans and out-of-state recruits alike. Dennis Johnson and Tim Couch went to UK prior to the modern-day recruiting services, but they both would've been top 10 overall and certain five star recruits. Damien Harris is a no doubt five star committing to UK with all the modern trappings and spotlights. It's not a position of need per se, but his signing is just important as its perception for the 2016 recruiting class. I think he'd share carries with a loaded backfield his freshman year, but move to getting at least 10 carries per game by his sophomore season.