Thank goodness exhibition season is over.

TV/Feed: The SoCon, though I have no idea if it's free.

Bonus!  This might be a Chattanooga feed, if you're so inclined.

Since last year, UT-C has been coached by Jim Foster, who is one of the more respectable coaches in the women's game with more than 800 wins in his career.  He's ... 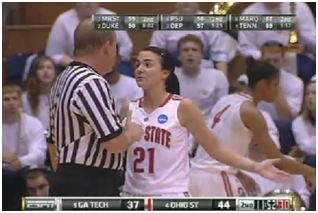 Oh, right.  Why didn't she play for Mulkey, again?

So if you need reason to hate on UT-C (I mean, you don't, but just saying if you felt in the mood), Foster was formerly coach at Vanderbilt and at Ohio State (and this UT/OSU preview is surprisingly relevant to UT-C's style of play).  So there you go.  Back to the things that matter...

The Lady Vols are finally out of exhibition mode as UT-C is a respectable 3-2 with wins over Villanova, South Florida, and Austin Peay, and losses to Butler and Notre Dame.  Add in a good, solid coach, and we'll finally get a better gauge on how good Tennessee is.  We'll also see if Tennessee is able to exert their will on a decent, if less talented, opponent: as with the Foster-led Ohio State team referenced above, the Lady Mocs like a slow game.  As in, 67 possessions / game slow (UT is over 80).  UT-C will rotate about 8 or so, but they're a halfcourt team through and through.  They're only averaging about 13 turnovers a game and forcing 16, which is really good when you go back and read that list of opponents so far.  Meanwhile, Tennessee is forcing 28 and coughing up 12 turnovers/game, albeit against the Little Sisters.  The Mocs are getting 0.92 PPP and giving 0.91, with that Notre Dame game tempering things a bit, which UT is getting 1.14 and giving 0.59.

All in all, the Mocs will try to force halfcourt play and won't make a lot of bad decisions with the ball.

As for players, the first girl to stop is 6'-2" Jasmine Joyner, who's averaging a double-double (12.6 points, 12.0 rebounds and yes that's somebody who's rebounding well /coughcough /glaresatTennessee /coughcough).  She's averaging 30 minutes a game, which you can do when you play halfcourt sets for 40 minutes.  The problem for UT-C is that, after Joyner, there's nobody left over 6'-0" other than 6'-3" Ansley Chilton, who's getting 6 minutes/game.  (After that? 6'-0" Moses Johnson at 19 mpg.)  All that means, in sum, that owning the interior comes down to effectively defending and boxing out Joyner.

Outside Joyner, Keiana Gilbert is a 5'-11" freshman who's leading the team with nearly 36 minutes per game, which takes us right back to the point about dictating the pace of play.  She's 50% from beyond the arc but only 60% from the stripe, so she's a great candidate for tight coverage. Her 11 ppg is the only other number in double figures for the team, but that doesn't mean quite so much when you're playing roughly two standard deviations below the league average pace.  What does matter, however, is that she's Simmons-level inefficient (0.208 Eff/Poss, which would rate her roughly around Burdick on UT's squad so far this year).  She's a freshman, after all, and she can probably be baited into freshman mistakes.

The other names you'll hear are Chelsey Shumpert, Aryana Gilbert (who might be Keiana's sister? I have no idea), and Ka'Vonne Towns.  But stopping UT-C comes down to stopping Joyner and not letting Keiana Gilbert get hot and gunning it out.

PREDICTION: 91-51 Tennessee, which totally doesn't have anything to do with Notre Dame beating UT-C 88-53 in South Bend nope not at all okay maybe a little okay yes it does leave me alone will you?  Meanwhile, Pendley has lost his faith and is guessing a paltry 82-57 win for the Lady Vols.

PLAYER TO WATCH: Bashaara Graves, who's been remarkably quiet for a post getting 14 PPG and almost 9 RPG.  Her defensive rebounding hasn't been as dominant as one would expect, which is at least a part of the Lady Vols' rebounding lull.  It would be nice to see that change before Texas.