Share All sharing options for: Defensive Tackle Quay Picou Commits to the Vols 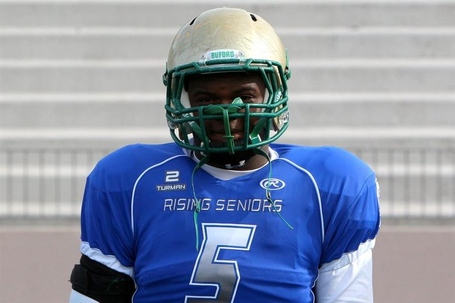 Where did he come from?

How did he end up at Tennessee?

Picou's commitment was surprising, considering that he had listed a top four of Ohio State, Miami, Cincinnati, and Texas A&M as recently as the end of April. According to fellow SBNation blog Land Grant Holy Land, the Buckeyes were considered the heavy favorite to land Picou, because he grew up in Cincinnati and attended traditional Ohio State feeder school Moeller High School until his family moved to Georgia (for more, check out LGHL's excellent profile: Picou has Buckeyes on top after offer).

However, Picou was blown away by the Tennessee facilities while attending the Orange Carpet recruiting event in Knoxville with Buford High teammates linebacker Austin Smith (who also committed to Tennessee) and tight end Isaac Nauta (who received an offer for 2016).

How will he fit into the Tennessee defense?

Picou plays all along the defensive line for his high school, lining up at the nose, as a traditional tackle, and at end. On film, he shows flashes of disruptive ability, and consistently holds up at the point of attack against double teams. He's currently a bit of a defensive line tweener, with 247 Sports listing him at a stout 6'3 and 287 pounds, while both Rival and Scout have him significantly lighter at 6'3 and 260 pounds. Whatever the case, Picou looks like he has the frame to add good weight up to the 290-300 pound range with time in the Tennessee strength and conditioning program. Picou is a high three star player and the 25th best defensive tackle in the 247 Composite, and a four star player and the 23rd best defensive tackle by the 247 recruiting service. Tennessee is likely to take at least three defensive tackles in the 2015 class and are among the top contenders for five stars Kahlil McKenzie, DJ Jones, Tim Settle, and Shy Tuttle. Nevertheless, Picou is the kind of solid SEC prospect the Vols have missed out on in recent years.