Tennessee Ladies Get Excited For Football, and Kirk Herbstreit Too

In today's talking points, we address a few things on the minds of Vol fans, and also their significant others.

Share All sharing options for: Tennessee Ladies Get Excited For Football, and Kirk Herbstreit Too

Football On The Main Stage

Tennessee travels to Oklahoma for its third game of the year and its first outside the cozy confines of Neyland Stadium. If all goes as planned and the Vols roll into Oklahoma undefeated, this will be a true big-boy litmus for Butch Jones in the all-important Year 2.  Him and his charges are presented with an opportunity to prove something to the many who doubt their ability to ascend to legitimacy -- and perhaps beyond -- and now they get to do it when everybody's watching.  Primetime, baby!

For example, your wife/girlfriend will be watching out for Kirk Herbstreit (don't worry, she still loves you, but it's Herbie), and Brent Musberger will be keenly watching players' girlfriends and then talking about them for a half hour or so while he watches them.  As you can see, everybody's going to be watching.

Coach Jones put on a coaching clinic for the ladies, and while it all seemed quite spirited and fun, it maybe didn't seem just quite as spirited and fun as it could have been.  What I'm saying is that there are certain times when I miss having Ed Orgeron on the Tennessee coaching staff, and the day of the women's football clinic is certainly one of them. Nobody got the ladies pumped up quite like yaw yaw footbaw.

Get To Know Your Newest National Champions

This is a good article from UTsports.com on the National Championship winning tennis duo of Hunter Reese and Mikelis Libietis.  Both of these guys are going to be back next year, and I'm still holding out hope that they can lead us to the team championship that has previously proven elusive.

This Has Nothing To Do With UT Athletics

But while we're on the subject of tennis, I feel as if it's my duty to remind you that you're not as athletic as Gael Monfils. 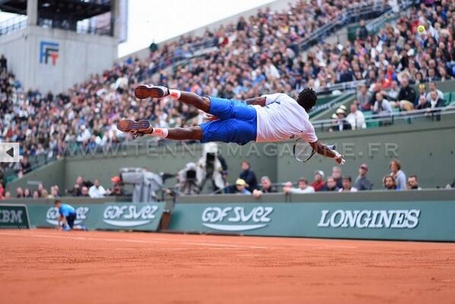