Share All sharing options for: Kahlil Mckenzie Puts the Beast in Beastmode

He's like Billy Madison playing dodgeball with third graders.  Except that the third graders here are actually the top offensive line recruits in the country.  Think about that for a second.  The guys that Mckenzie is going up against at The Opening are literally the best in the country at preventing another human being from running past them.  Nike devotes not-insubstantial resources to ensuring this is the case.  And then Kahlil just runs over them -- all of them -- like they're small children.  This is glorious glorious destruction, and it's coming to Neyland Stadium.

All Of The Below Carnage Is Officially Licensed to Kahlil

The guy he's going up against in this one below is a Bama commit.  I wonder how many sacks Mckenzie gets in his first game against Bama?  Vegas has the over under currently set at 14.5.  This is also the over under for Bama pass attempts. Seems reasonable.

Sometimes a still image tells the tale as well as any video: 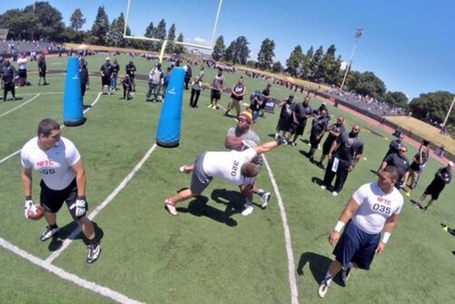 And it can't possibly that I found every clip.  Prove me right in the comments.