SEC Offensive Line Rankings, If Only

In conjunction with the rest of the SBNation SEC blog community, we're ranking the offensive lines for the upcoming season. Our ranking will be compiled with submissions from other SEC sites, results will be tallied, and then posted for all to see. I mean, that would all happen in the absence of ridiculous shenanigans.

Share All sharing options for: SEC Offensive Line Rankings, If Only

June 27, 2014 (via email): Hey everybody, I have this fantastic idea!  Let's do positional rankings for teams in the SEC.  The way we'll go about doing it is to have every SEC blog that wishes to participate submit their entries by Saturday afternoon -- along with accompanying explanations -- and then we'll compile all the data, and put up a post the following day.

Friday July 4, 2014, 9pm EST:  KidB and Hunter Turner finalize the defensive line rankings, submit them as instructed, and then put up a post with our rankings and explanations.

Friday, July 11, 2014, 2pm EST: From Whom The Cowbell Tolls -- inexplicably -- publishes compiled results for offensive line rankings.  Only five blogs have submitted rankings.  Hmmmm.....I wonder why that might have been?

Friday, July 11, 2014, 7pm EST: Hunter informs KidB that From Whom The Cowbell Tolls already posted the results.  The following is stated:

Are you [fulmerized fulmerized] kidding me?  So they designated Saturday as the day our rankings needed to be in by, and then they put up the post with the compiled rankings on Friday at 2pm?  I didn't realize that Corky from Life Goes On was our organizer. That's just super.

EDITOR'S NOTE: While this is an accurate recounting of events from our perspective, the guys at For Whom the Cowbell Tolls could not have been nicer when we emailed them. We'll be back in the poll next week now that we've figured out the deadline. Thanks to Mark and FWtCT for setting up this poll series.

If We'd Done It: the Rankening

Anyway, so the below rankings were not included in the "official SEC rankings", but how official is it when only five blogs submit their rankings?  And so these rankings are for our enjoyment only this week.  Hey, maybe some Mizzou fans will stop by and chat with us about them.  Those guys are fun.

1. Auburn: The 2013 version of Auburn was the most prolific big-time rushing attack we've seen since the late 90s Nebraska Cornhuskers.  This was due in no small part to a mean and well-organized offensive line.  The Fighting War Eagle Tigers do lose a key cog in Greg Robinson, but they also return four starters, 113 career starts, and so they should probably pick up right where they left off.

2. TAMU: You could likely put KidB, Hunter, and the three most talented of their combined 7 nieces and nephews (all under age 6) on an offensive line, and if Johnny Manziel was lined up behind us, the numbers would look fairly respectable.  That said, TAMU returns four starters (89 starts) from a unit that would probably have been pretty damn good even if their QB hadn't been a certifiable magician.  We'll give them the benefit of the doubt.

3.  LSU:  Last season the team with the second sharpest looking uniforms (truth) in the league averaged 5 yards per carry and had an impressive sack rate of 7.7%.  They lose only their right guard from that line, and return 9 from the top end of the depth chart, including Superman's brother La'El Collins.  This is a unit that will be talented and deep.

4.  South Carolina: The Fightin' Steven Orr Spurriers had an effective offensive line last season that paved the way for 198 ypg rushing and allowed only 23 sacks on the year.  They return 6 players who have started at least five games, and have a combined 113 starts.  They lose only last season's right guard.  This is good news for both the Gamecocks and Stevie O's handicap.

5. Bama: Still more talented than almost everyone, but are cracks beginning to show in the facade after what seems like a decade of dominance? And what are those plaintive cries that rend the night? Is Saban upset that he must rely on a true freshman left tackle, or has a fearsome DACOACHO migrated to hunt in these fell woods? Lane Kiffin knows, and he's already ordered his panic room to be stocked with Bear Repellant and Axe Body Spray (because the end of the world doesn't mean you should stop your personal care regime).

6.  Arkansas: Finding five overweight men interested in pushing each other around in the hot sun isn't exactly challenging in a state ranked first in adult-onset diabetes and last in entertainment options.  And who counts plus-sized model Bert Bielema as a respected public figure and role model to the kids.

7. Missouri:  Although this isn't the 7th most "talented" offensive line in the SEC, coach Gary Pinkel is well known for finding "diamonds in the rough" and "recruiting to his system" and then "coaching them up".  And in the end this offensive line will "do what it does".

8. Ole Miss: Different position group; same story.  Ole Miss has some talent on the line, but after losing four starters from last year's line, they'll be paper thin. This would be easier for Hugh Freeze to deal with if Houston Nutt would stop drunk-dialing him late at night only to cackle, "That's why ya gotta sign a'least 35... no... 45 of them recruits in ev'ry class. That's what the ol' Nutter would do, that's for sure!" Basically, this offensive line has a fever... but they also have the man with exactly the right prescription.  And his name is Dr. Bo.

9. MSU: Returns four seniors on the offensive line, which is amazing because have you ever been to Starkville? The Bulldogs game against LSU in Baton Rouge looms large, but not for the reason you're probably thinking (unless you're thinking about North Korean soccer defectors). At Dillon Day's signal, the offensive line will execute a meticulously planned operation code-named The Full Sherrill whereby the seniors will crawl down the sewer pipe during the post-game shower, exchange their uniforms for civilian clothes secreted around Tiger Stadium by an Underground Railroad of escaped former Starkville residents, and steal away into the bayou, never to be heard from again. Some time later, Dan Mullen will receive a cryptic letter with a picture of a flat bottomed skiff tied up to dock on a beautiful stretch of river. "If you ever make it out," the letter will read, "promise me that you'll visit a peanut field outside of Tuscaloosa. There's a solitary tree there that bears the mark of a lightning strike. I've left you something buried underneath there. You'll know where to find me. --your friend, Sylvester."

10. UGA:The Dawgs lose Kenarious Gates, Dallas Lee, and Chris Burnette from last season's line, but Todd Gurley is good enough to make any offensive line look better. Plus, Hutson Mason has been in the program for five years, knows the system, and should be able to make things much easier for the new starters up front.  So the transition to new personnel should be fairly smooth, at least until "Hutson Mason" gets busted (most likely by freshman recruit Jacob Park, suspicious of the many Hoobastank t-shirts in Mason's closet) as being not a QB with a weak arm and limited athleticism like David Greene, but actually a 32 year-old David Greene in disguise.  It won't be all bad when this happens, though, as Mike Bobo (aka the Georgia Randy Sanders) is a proven offensive mastermind.  Oh wait.

11. Tennessee: Inexperienced in the form of returning starters for sure, but this not a group that lacks talent, or that lacks meaningful experience, just meaningful starts. The interior of the line, featuring center Mack Crowder and guards Marcus Jackson and Kyler Kerbyson, is a tough, experienced group of upperclassmen. The tackles... not so much.

12. Kentucky:  The Wildcats would like to upgrade from last year's bronze medal in the Bluegrass Gridiron Olympics to a shinier silver one this year (even if they succeed, it still means quietly seething while the Cardinal Cha Cha plays in the background). It's unlikely.  And yet...

13. Vandy:  They were second-to-last in the SEC last year in adjusted line yards and are going to be running an entirely different system this year.  If the offensive line wasn't performing well in a system they were comfortable with, there are certainly going to be some question marks about how they perform in a system they're just starting to pick up.  Adding in a new QB won't make already difficult matters any easier.

15. Florida: Without last season's center Jonotthan Harrison, the Gators are going to have a much tougher time blocking their own wide receivers with such textbook form: 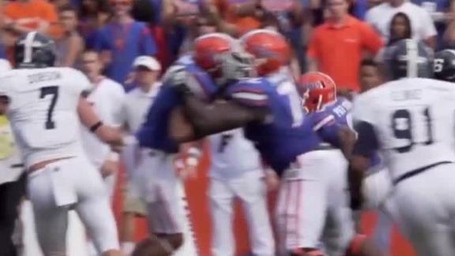 Also, they were last in the SEC last season in adjusted line yards and are replacing three starters.  It could be argued that losing last year's starters is actually addition by subtraction, but that's usually not how it works when you have the worst coach in college football.

Cue the angry rebuttal from Alligator Army in three, two...