How do the players' relative experience and talent compare to that of the guys they'll be battling this weekend?

Share All sharing options for: Tennessee's offense vs. Utah State's defense: the relatives

Below is an image showing the Tennessee offensive starters lined up against the Utah State defensive starters. The numbers below the names are a representation of that player's experience and recruiting rankings. How did I arrive at the number? Well, let's just call it proprietary for now and agree that it's a work in progress. Depending on how Von Pearson does this week, I'm guessing that I'm going to conclude that I'll weigh recruiting more and experience less next week. 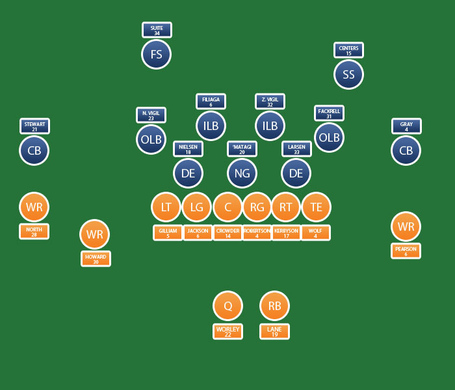 I'll leave y'all to draw your own conclusions this week, but a few things jump out.

Offensive line. The offensive line is as green as you think it is, but Crowder and Kerbyson do have a fair amount of game experience. Even those two are overmatched, though, with respect to the guys who will be lining up against them.

The passing game will be key. The wide receivers, on the other hand, appear to have an advantage at every position. North will likely draw Rashard Stewart, the Aggies' best corner, but North, even as a sophomore, appears to be more talented and more experienced. Free safety Brian Suite looks like he's the best defender, and he may be helping with North or helping with Pig Howard, but he'll have his hands full with the two of them. On the other side, Pearson's score is almost certainly too low due to an utter lack of any game experience, but his likely opponent -- Daniel Gray -- is in a similar position but without as much talent. If North and Howard are mitigated by Stewart, Suite, and one of the outside linebackers (both of whom are experienced), then the Pearson-Gray matchup may be the deciding factor.

What else do you see from that image?