It's official: the Vols are asking fans to take part in making Neyland Stadium a living checkerboard against the Florida Gators on Saturday.

Share All sharing options for: Vols Will Checker Neyland for Florida Game

Here's what happens when a good idea gets a push from the head coach:

#VolNation you asked for it, now make it a reality!!! Go to http://t.co/JcVZg81ehY to find out what color to wear on Sat! #CheckerNeyland

So it appears #checkerneyland is on.  You can visit checkerneyland.com and enter your section at Neyland Stadium to see if you need to wear orange or white on Saturday to take part in the 102,455 seat living checkerboard when the Vols face the Gators at noon on Saturday.  The genesis for this particular idea appears to be this tweet during the Oklahoma game.

Tennessee pulled this off at Thompson-Boling Arena back before such things were cool in Bruce Pearl's first season eight years ago: 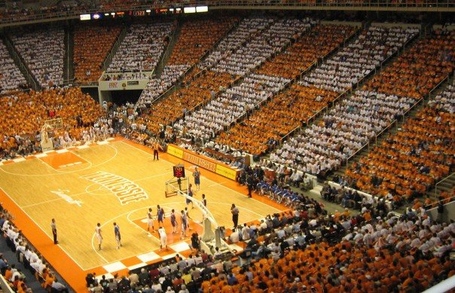 This one will obviously be on a much larger scale (and without as many free t-shirts I'm sure...), but chances are if you're reading this you own both of the required colors.  If you're like me, when it's time for laundry you do a load of whites, a load of darks, and a load of orange.

The game should be announced as an official sell out soon, and given Florida's struggles of late and the nine hours separating Knoxville and Gainesville I'd imagine there won't be much blue to break up the pattern.  Lots of things are coming together to make for what could be a very special Saturday in Neyland Stadium.

If you'll be in attendance, check your section and take part in #checkerneyland.