How do Tennessee's players match up against Arkansas State's players? Pretty well at almost every spot, actually.

Share All sharing options for: Tennessee-Arkansas State: The Match Ups

Last week, these images used experience and talent data from last season to rank projected starters, and this week we've updated that to include career data. It's all on a 100-point scale and is still subject to change. It does seem to be much improved this week, though, as the highest-ranking player for Tennessee on offense is Marlin Lane, a senior who came into the program as a 4-star recruit and who's played in 36 games and started 7 of them. Behind him is Pig Howard and then Marquez North and Justin Worley. Von Pearson gets a fairly high ranking due to being a highly-ranked JUCO transfer.

The numbers also bear out what we know intuitively, that Tennessee's offensive line has issues, especially at the left tackle position just vacated by injured Jacob Gilliam. Whether he's replaced by Kendrick or Blair, the talent/experience number doesn't change much.

So how do Tennessee's players match up against the guys opposite them, and what does it mean for Saturday? Let's take a look.

The run game. It appears that Tennessee should have an advantage running the ball, especially at the edges and if they can get Darrius Rosser (Arkansas State's nose guard) blocked. They may run into stiffer resistance when and where the 'backers show up, but even then it shouldn't be more than an even challenge. All of this is compounded by the fact that Arkansas State's depth chart includes a Bandit and a nickelback, which suggests that their preferred formation leans toward pass defense. So yeah, let's establish the run.

The passing game. Um, yeah, there's also an apparent advantage in the passing game, with each of Marquez North, Pig Howard, and Von Pearson having advantages over the guys who will be attempting to cover them. If Justin Worley can continue to be on target in the short-and mid-range game, the team should find success in a balanced attack. 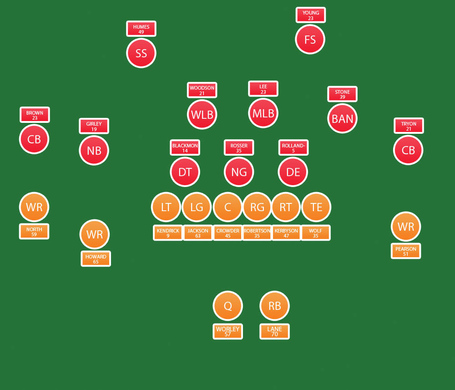 Balance. Again, Tennessee, even with such a young and inexperienced team, appears to have the talent/experience advantage at nearly every position against the Red Wolves. Along the line, we should be able to get a push up the middle, but expect things to be a bit tougher at the edges. The guys responsible for pass coverage should also be up to the task.

Knighten and Gordon. So the defense should be able to have everyone hold their own and then put any extra focus on stopping QB Fredi Knighten and RB Michael Gordon. Shut down those two guys, and it should be game over. 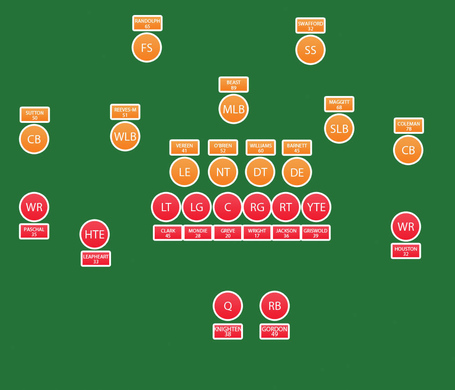