Coach Jones gets creative in the recruitment of 5-star Defensive Tackle Kahlil McKenzie, and our old friend Jon Gruden even lends a helping hand.

The Courting of Kahlil McKenzie

Kahlil McKenzie is a five-star DT from Concord, CA who 247 Sports rates as the 10th best overall prospect in the class of 2015.  He's a certifiable stud, and we want him bad.  Many expect him to pick the Vols because both his uncle Raleigh and his father Reggie, who is the GM of the Oakland Raiders, are Knoxville natives and former Vol players.

But Butch isn't taking any chances.  McKenzie is still deciding between UT and Arizona and will make his decision on July 10th.  And so Jones decided to send McKenzie on a "scavenger hunt" -- which began June 4 and will end July 10th (the day McKenzie plans to make his decision) -- in which McKenzie has to locate a  UT "bucket hat" in a picture and then post it to his twitter account.1

#Volnation @UTCoachJones is sending me on a little search! pic.twitter.com/lmlbhn0hPg

A picture of his pops.

Coach Gruden watched my film and he said this is who I remind him of!! #honored #VolNation #bucketgang pic.twitter.com/cN2FqpPFHY

A trophy he'll have his eyes on in the future.

#VolNation bucket found it's way to the Outland trophy!!!! pic.twitter.com/yhTxfuD6yP

This is just really impressive stuff by Coach Jones.  It could be that none of this mattered and that he would have been a Vol either way, but then again maybe not.  And it's creative strategies like this that help establish a connection between a recruit and the university, and also help differentiate UT from any other school that's recruiting him.  I will be very surprised if Kahlil McKenzie is something other than a Tennessee Volunteer come July 10th.

The Courting of Torrance Gibson

As noted by Mr. Turner yesterday evening, the Vols have secured the commitment of 4-star, pro-style quarterback Quinten Dormady.  This is excellent news, but this certainly doesn't make Torrance Gibson -- who was in Knoxville for a visit this past weekend -- any less of a priority.  I, for one, believe that a dual-threat quarterback is the preferred option in the college game.  And Torrance Gibson is the best of the bunch.  So it was great to see current class of 2015 commits and early enrollees from the most recent class pitching in on the recruiting efforts.

Chilling with @quick_tg6 trying to show him where he should be!

The class of 2014 taught us of the vital importance of intra-class recruiting.  High School kids want to play for a coaching staff they trust and believe, and for a program that presents to them an opportunity to both maximize and showcase their talent.  But they also want to go to school with guys that they've formed relationships with and consider friends.  The importance of current commits reaching out to uncommitted guys in an effort to convince them to join them in being a part of the class simply cannot be overstated.  And I'm happy to see some of that being done with respect to Torrance "faster than torrents" Gibson.  Go get him boys!

Not Related to Tennessee Athletics

The Great Great Rafael Nadal won his 9th French Open this past weekend, tying Pete Sampras with 14 majors.  Nobody has won a single major more times than Nadal has won Roland Garros, and I'm not sure anybody ever will.  Pete Sampras and Roger Federer are tied for second in that department, having both won Wimbledon 7 times apiece.

Nadal just turned 28 last week, and so it's anybody's guess how many times he'll win the French, and whether he'll eventually catch up to, or even surpass, Roger Federer's record 17 majors.  I wouldn't count the Mallorcan out, but I'm also not certain he needs to get to 17 to go down historically as the greatest to ever play the game.  There's a convincing argument that he already is.  And that's an argument I'm happy to make if anyone is interested. 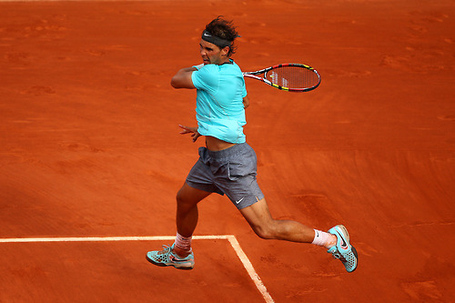 1. It's not exactly clear how Coach Jones has the scavenger hunt set up, but it doesn't appear that he's making it terribly difficult to locate the bucket hat. I'm thinking the degree of difficulty is roughly akin to the very first page of a Where's Waldo book. But that doesn't make the idea any less awesome.↩

Next Up In College Football